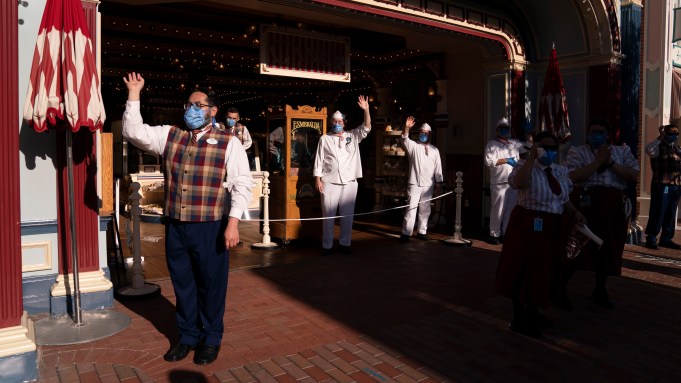 As coronavirus cases continue to decline across the U.S. and President Joe Biden vows to disperse 200 million more COVID-19 vaccine doses by his 100th day in office, Hollywood is inching closer to reopening.

Entertainment is among the industries most crippled by the pandemic. Nationwide lockdowns forced the shutdowns of television and film productions, delayed movie premieres, shifted release strategies and closed movie theaters.

California is set to fully reopen its economy on June 15 if vaccinations remain widely available and hospitalizations continue to stabilize. It will relinquish the four-tiered, color-coded system that has guided the state’s reopening process during the pandemic.

Meanwhile, California allows indoor concerts, theater performances and other gatherings as of April 15. Attendees have to either show a negative COVID-19 test result or proof of full vaccination. Three counties in northern California can hold concerts and other indoor events at 75% of capacity.

Los Angeles and Orange moved on March 30 into the orange or second-most-lenient tier, the third step in California’s reopening plan. To hit that milestone, a county must report 3.9 or fewer daily new coronavirus cases per 100,000 residents and a test positivity rate under 5%. This allowed movie theaters and restaurants to increase indoor capacity from 25% (or 100 people) to 50% (or 200 people).

The move also allowed places of worship, museums, zoos and aquariums to raise indoor capacity from 25% to 50%, while bars could reopen outdoors without being required to also serve food. Outdoor sports and live performances resumed at 33% capacity.

Theaters in New York City, one of the largest movie markets in the country, opened at reduced capacity on March 5 for the first time in nearly a year. They began operating at 33% capacity starting on April 26. Live indoor performances across New York State commenced on April 2 with the reopening of multiple flexible venues.

New York will lift capacity restrictions beginning on May 19, a move that potentially sets the stage for a Broadway and live theater revival.

Disneyland — which had been closed for nearly a year, costing Disney’s theme park division around $2.6 billion in lost operating income during the most recent quarter, and devastating the economies of Anaheim and Orange County — reopened on April 30, while Universal Studios resumed operations (only to California residents) on April 16. Six Flags Magic Mountain in Valencia reopened on April 3 for the general public.

Variety will be tracking all major reopenings, including movie theaters, performance venues and indoor restaurants, and updating this list as more announcements are made.

Hollywood Bowl and its sister amphitheater, The Ford, are both set to reopen for nearly full summer seasons in July.

Shakespeare in the Park: The cherished New York City tradition is set to return on July 6 with a reimagining of “The Merry Wives of Windsor” set in Harlem.

Daryl Roth Theatre: “Blindness” will soon be one of the first performances to open in New York City. The Donmar Warehouse production of Nobel Prize winner José Saramago’s dystopian novel, written by Tony winner Simon Stephens and directed by Walter Meierjohann, began performances on April 2 at the Daryl Roth Theatre.

The Shed: Manhattan’s new nonprofit arts center launched “An Audience With…,” a five-night indoor performance series from April 2 to April 22. Performances took place in The Shed’s 18,000-square-foot McCourt space that provides distanced seating for 150 people. The series opened with singer and cellist Kelsey Lu on April 2 and continued with musicians from the New York Philharmonic on April 14 and 15, soprano Renée Fleming on April 21, and comedian Michelle Wolf on April 22.

Restart Stages, which launched on April 7 with a special performance for healthcare workers, is a new outdoor venue with 10 performance spaces that will help kickstart New York City’s performing arts sector. Part of the Stavros Niarchos Foundation-Lincoln Center Agora Initiative, Restart Stages will feature events by organizations from across the five boroughs. Activities, which will be held for free or at a low cost, include an outdoor reading room, civic and community service events, and family programming.

OpenStage NYC: Architecture and design firm Rockwell Group and Tait, which designs and constructs live events, have teamed up to create OpenStage NYC — a new initiative that utilizes portable staging to help arts organizations move to outdoor performances this spring that allow for 50-person, socially distanced audiences. The performance stages will utilize streets, plazas and other public spaces.

Regal Cinemas reopened on April 2 with a limited release for “Godzilla vs. Kong.”

The Paris Theater, the longest-running arthouse cinema in New York City that Netflix now operates, reopened at limited capacity (50 people) on March 19 with a 35mm engagement of “The Trial of the Chicago 7.”

The below chains have resumed business in Los Angeles County:

The Bonnaroo Music and Arts Festival will take place from Sep. 2 to Sept. 5 on the Bonnaroo Farm in Manchester, Tenn. The event’s 20th anniversary edition will feature performances from Lizzo, Megan Thee Stallion, Foo Fighters, Lana Del Rey, Tyler, the Creator, Janelle Monae, Tame Impala and others across more than 10 stages.

The Tribeca Film Festival will return as an in-person event for its 20th anniversary. Screenings and talks will be held from June 9 to June 20 across New York’s five boroughs, including at Brookfield Place New York, the Pier 57 rooftop, The Battery, Hudson Yards, Empire Outlets in Staten Island and MetroTech Commons in Brooklyn.

San Diego Comic-Con is returning over Thanksgiving weekend, from Nov. 26 to Nov. 28, with a “special edition” in-person gathering.

Universal Studios Hollywood reopened (only to California residents) on April 16.

Disneyland reopened at 25% capacity on April 30. Rides such as Star Wars: Rise of the Resistance, the Incredicoaster and Peter Pan’s Flight will all reopen, while Fantasyland – Snow White’s Enchanted Wish will launch for the first time.

Six Flags Magic Mountain in Valencia reopened for the general public on April 3.

Los Angeles museums were given the go-ahead on March 15 to reopen indoors at 25% capacity.

The Getty Villa Museum opened on April 21, while the Getty Center will likely open in late May.

The Los Angeles County Museum of Art reopened on April 1 with six new exhibitions on display.

The Hammer Museum reopened on April 17.

Musso & Frank Grill will open for dining room service on May 6. The venue will open to customers starting on May 10 at 5 p.m. as a part of its Mother’s Day celebration. Following the grand reopening, the venue’s operating hours will be 5-11 p.m. Tuesday through Saturday, and 5-10 p.m. on Sunday.