Continue to Variety SKIP AD
You will be redirected back to your article in seconds
Apr 25, 2021 8:14pm PT

H.E.R.’s ‘Fight for You’ Wins Unpredictable Best Original Song Race at the Oscars 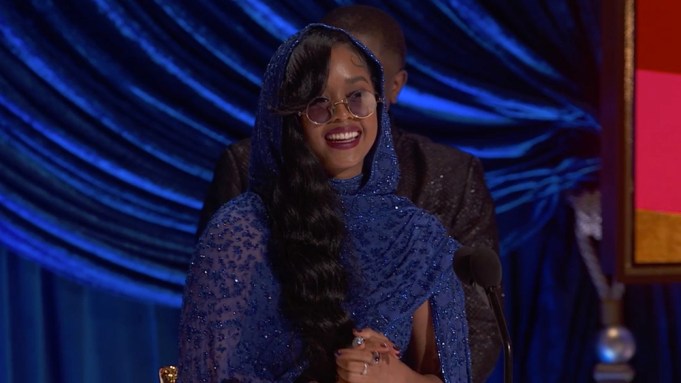 In one of the surprises of the evening, “Fight for You,” H.E.R.’s end-title theme for “Judas and the Black Messiah,” won the best song Academy Award Sunday night.

The 23-year-old singer-songwriter was clearly shocked by the win but thanked her parents, noting, “those days of listening to Sly and the Family Stone, Curtis Mayfield and Marvin Gaye — they really paid off!”

The soul-flavored song by the singer and her co-writers, D’Mile and Tiara Thomas, featured under the end titles of the historical Black Panthers story. It came as a surprise to many, as “Speak Now,” from “One Night in Miami,” “Io Si” from “The Life Ahead,” and “Husavik” from “Eurovision Song Contest” had generally been thought to be the front runners.

The song’s ’70s soul style perfectly matched the period of the film and the Fred Hampton story being told (as the lyrics said, “oh you better beware, their guns don’t play fair, all we got is a prayer”). It was one of three nominated songs that spoke directly to the national conversation on racial injustice that made them not just relevant, but significant cultural events beyond traditional movie songs.

The Oscar win extends H.E.R.’s awards streak, after she recently won song of the year (“I Can’t Breathe”) and best R&B song (“Better Than I Imagined”) at the Grammys.

Backstage, the Oscar-winning songwriter said, she hoped her win would send a message “to all the young Black and Filipino girls that you can be up here too.” She added, “What you say matters. What you write, matters. It’s a reflection of who we are.”

With the Oscar and Grammy win, H.E.R. still needs an Emmy Award and Tony Award to achieve EGOT status. Asked backstage if she had anything on the horizon, “There’s absolutely going to be an EGOT in my future, hopefully. I’m super compassionate about acting as well. You may see me up here as an actress,” she teased. She nodded to her love for musicals and had been in conversations with Brandy. “She inspired me since she did a musical.”

The win came at the expense of veteran songwriter Diane Warren, who now has 12 best song nominations without a win, spanning the past 33 years (including such hits as “Because You Loved Me” and “I Don’t Want to Miss a Thing”). She campaigned heavily for her song, “Io Sì (Seen),” co-written with Italian performer Laura Pausini, which played under the end titles of the Sophia Loren film “The Life Ahead.”

“Speak Now” was predicted to win by more than half the town’s Oscar prognosticators. “Husavik,” meanwhile, had more than 10 million views on YouTube and a grassroots campaign from the real Icelandic town that inspired it. “Hear My Voice” from “The Trial of the Chicago 7” and the H.E.R. song had been considered long shots in the race.

H.E.R.’s performance of the song with a full band and complement of dancers capped the Oscars’ pre-show telecast, in which all the songs were performed in their entirety, its placement leading into the main show likely reflecting its status as the most energized of the five contenders.