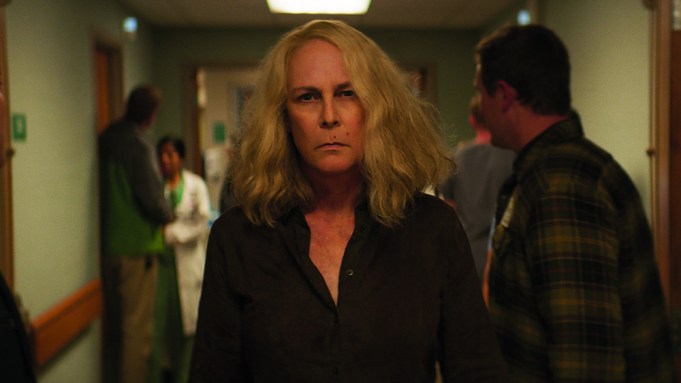 “Halloween Kills,” the upcoming entry in Universal’s slasher franchise, will debut on Peacock on the same day as its theatrical release.

The scary sequel will be available to Peacock Premium subscribers at no extra fee. The service launched in 2020 and runs at $4.99 per month for its ad-supported tier or $9.99 without advertisements.

Universal first deployed a day-and-date strategy on Peacock earlier this summer with “The Boss Baby: Family Business.” The animated adventure film made $57 million at the domestic box office and $48 million internationally, which isn’t a bad result given the ongoing COVID-19 crisis but (expectedly) didn’t come close to matching ticket sales for its predecessor. “The Boss Baby” premiered in 2016, at a time when the thought of a world-altering pandemic felt like the plot of a Steven Soderbergh movie, and it became a surprise hit with $175 million in North America and $352 million overseas.

For “The Boss Baby: Family Business,” the studio didn’t report the number of people who opted to watch the exploits of the entrepreneurial toddler, voiced by Alec Baldwin, on Peacock. However, the company’s corporate overlords must have been happy with the results since it’s replicating the hybrid release model for “Halloween Kills,” which had the potential to make a killing in theaters. It’s a sequel to 2018’s “Halloween,” which revived a decades-old franchise and generated $255 million globally, making it the highest-grossing slasher film in history (unadjusted for inflation).

“Halloween Kills” is the latest in a long line of pandemic-era releases to deviate from a standard theatrical rollout. Since movie theater attendance has remained low, traditional Hollywood studios, such as Warner Bros. and Disney, have opted to put many of their biggest movies simultaneously on the big screen and streaming platforms.

Though growing Peacock’s subscriber base remains a priority for Universal’s parent company, the studio has maintained its commitment to multiplexes through a pact it established last year. Under the formal agreement with cinema chains, including AMC and Cinemark, Universal can put its new movies on-demand after 17 days in theaters. Prior to the pandemic, studios had to keep their new releases on the big screen for at least 75 days. COVID, however, dramatically shifted the power dynamic between cinema operators and distributors. Universal is the only major studio with a written arrangement for theatrical windows. Its rivals are expected to converge on a 45-day window once the pandemic abates.

Directed by David Gordon Green and produced by Blumhouse, “Halloween Kills” takes place minutes after Laurie Strode, her daughter Karen (Judy Greer) and granddaughter Allyson (Andi Matichak) left the masked murderer Michael Myers — who has been torturing the eldest Strode for essentially her entire life — caged and burning in the basement. But as Laurie is rushed to the hospital with life-threatening injuries, Michael manages to free himself and continue his ritual bloodbath on the spooky holiday.

“Halloween Kills” had its world premiere at the Venice Film Festival. Variety’s chief film critic Owen Gleiberman wasn’t impressed with the latest return to the town of Haddonfield.

“It’s a mess — a slasher movie that‘s almost never scary, slathered with “topical” pablum and with too many parallel plot strands that don’t go anywhere,” he wrote.