Hear parts of the first track "Scared" for the Netflix boxing drama by City Girls, set to be released on Nov. 5. 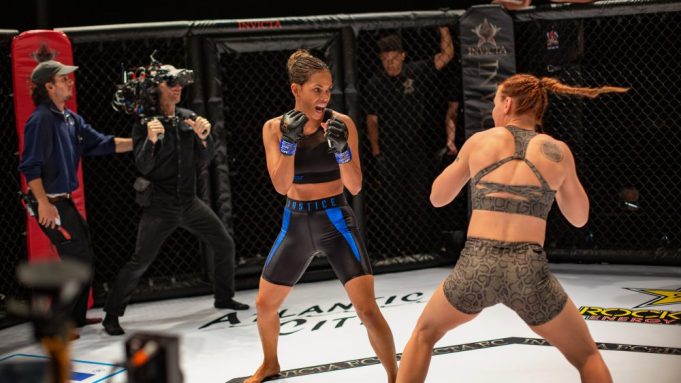 Warner Records will issue the soundtrack for actress Halle Berry’s directorial debut film “Bruised” on Nov. 19. The Netflix feature — which Berry also stars in as a disgraced M.M.A. fighter — debuts on the streamer on Nov. 24, after a limited one-week run in theaters.

“I can’t wait to show it,” Berry tells Variety. “I have to tell you, one of the things I’m most excited about is the title song that H.E.R. sang… and she killed it. So I can’t wait to share with everyone and am super excited.”

Hand-selected by executive producers Berry and Cardi B, the film’s soundtrack features six original songs by award-winning and multi-platinum female artists, including Cardi B (“Bet It”), Saweetie (“Attitude”), City Girls (“Scared”), H.E.R. (“Automatic Woman”), Flo Milli (“Blast Off”) and Latto (“Tha Fuck”). The tracks by H.E.R. and City Girls, both prominently featured in critical moments of the film, are expected to get a considerable push as awards season continues to unfold. In addition, the track by Miami duo Yung Miami and JT gritty, better known as City Girls, which is featured during a key sequence on-screen, will be the first single released on Nov. 5. Listen to parts of the song down below.

Saweetie teased her contribution to the film last week by posting an internet-breaking clip of herself dressed as Berry’s famed Catwoman from the 2004 film that has seemed to find a second life on social media. The Saweetie clip drew over 18 million Instagram and TikTok views.

H.E.R., who is fresh off winning the Academy Award with D’Mile and Tiara Thomas for their song “Fight for You” from “Judas and the Black Messiah,” is a hot commodity in the entertainment industry. H.E.R.’s protest anthem “I Can’t Breathe” won song of the year at the Grammys this past year, putting her halfway to EGOT status. At 23 years old, she also became the youngest African-American to win an Academy Award (surpassing Jennifer Hudson’s supporting actress win for “Dreamgirls,” who was 25 at the time). Her song “Automatic Woman” is another awards-worthy entry for original song.

“Bruised” is premiering at the AFI Film Festival on Nov. 13. The film presents Berry in one of her most physically demanding and assertive acting portrayals of her already impressive career. It’s been 20 years since she won the best actress Oscar for “Monster’s Ball” (2001), becoming the first and only Black woman ever to win the award. Unfortunately, her historical moment at the 2002 ceremony, which also saw Denzel Washington taking home best actor for “Training Day” and Sidney Poitier being given an honorary award for his decades of excellence, has not been repeated since, despite ample opportunity, including two nominated Viola Davis performances (“The Help” and “Ma Rainey’s Black Bottom”) and a few other snubbed turns (i.e., Lupita Nyong’o in “Us”).

“That moment 20 years ago allowed me to have this moment,” Berry shares. “I realized that I can do what I want to do and found something I was passionate about. I love seeing these women of color who are now writing, directing, producing – telling their own stories. It’s important because for so long, Black women have had their stories told through the eyes of White men. Now, we get to realize our own stories, and that is exciting.”

If her spirited performance does manage Oscar recognition, she stands to make history in two significant ways. She would be the first woman filmmaker to direct herself to an acting nomination. She would also be the third Black woman to win an Oscar and return as a nominee (following Octavia Spencer and Viola Davis).

Berry’s assembling of artisans is impressive with Japanese composer Aska Matsumiya, who worked on last year’s “I’m Your Woman” from Julia Hart, and the upcoming “After Yang” from Kogonada premiered at this year’s Cannes Film Festival, provides her exciting orchestral notes. Through the lens of cinematographers Joshua Reis and Frank G. DeMarco, the movie was shot in Atlantic City and Newark, N.J., and is produced by Berry, Basil Iwanyk, Brad Feinstein, Guymon Casady, Linda Gottlieb, Erica Lee, Gillian G. Hormel, Paris Kassidokosta-Latsis and Terry Douglas.