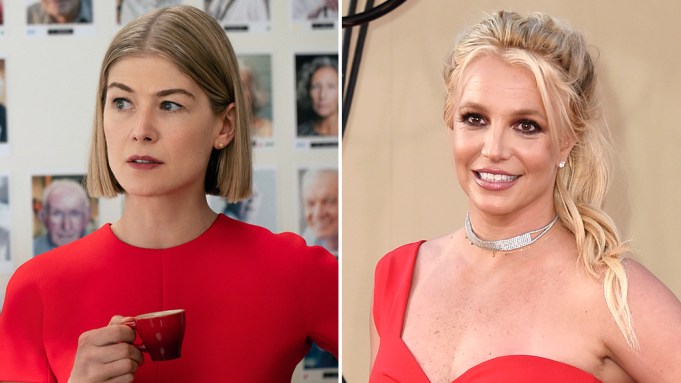 Rosamund Pike has a track record of getting audiences talking with her daring performances — but an unexpected bonus from her Golden Globe-winning turn in “I Care A Lot” has been a conversation about some of the most scrutinized members of society.

In a virtual backstage conversation at Sunday’s Globes telecast, following her win for best actress in a motion picture comedy, she said the buzz around the film was the closet thing she’d experienced to the phenomenon created by “Gone Girl” — the 2014 David Fincher thriller that put Pike on the map.

“The way people passed memes, quoted lines back and forth, the way that the audiences felt connected through conversations about it has been about as close as you can hope for outside the cinema,” Pike said of the Netflix original, which shot to number one on the service in dozens of counties upon its premiere. She specifically hailed the film as having “reawoken conversations about conservatorship.”

While she did not directly name Britney Spears, “I Care A Lot” arrived at the same time the global media had been devouring an FX/New York Times documentary special examining the pop star’s conservatorship — a court-ordered mechanism to protect the finances and well being of those who cannot care for themselves. This has confounded many in the case of Spears, given her consistent professional output and regular social media presence.

In “I Care A Lot,” Pike plays Marla Grayson, a ruthless court guardian to the elderly crafting a devious system of financial and emotional exploitation. The actor also celebrated the character’s comparison to her “Gone Girl” character, the revenge-obsessed Amy Elliot.

“Marla and Amy are very different women. Marla is a much scrappier street fighter, but I do see what people respond to, is that they’re abhorred at as to what they are doing but so disinclined to switch them off,” she said.

“I Care A Lot” boasts an ensemble cast that features Peter Dinklage, Eiza Gonzalez, Chris Messina and Dianne Wiest. This is Pike’s first nod for comedy. Her first two Golden Globe nominations were for dramatic roles in “Gone Girl” and “A Private War.”