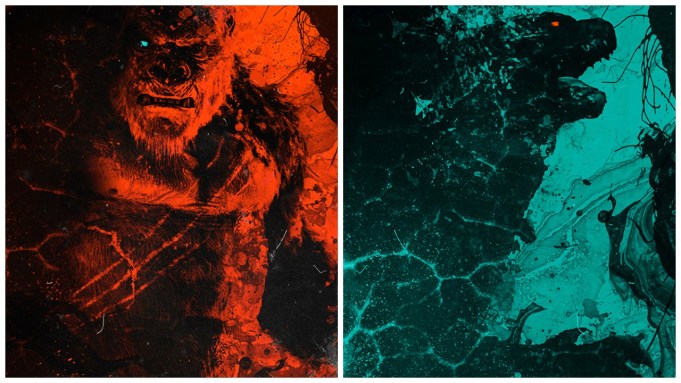 Legendary Entertainment announced it will release an exclusive “Godzilla vs. Kong” NFT collection on the same day the film hits theaters and HBO Max. It marks the first official NFT art release in collaboration with a major studio.

Created by Australian digital concept artist BossLogic (Kode Abdo) and Terra Virtua Ltd., the digital collectibles will be available for purchase for a limited time on Wednesday at 3:30 p.m. PST. Vincent Harrison of iv Gallery curated the seven-piece collection.

“Godzilla vs. Kong had an incredible launch internationally, and we are excited to bring that energy to the block-chain,” Legendary Entertainment’s executive vice president of franchise management James Ngo said.

Artwork titles include “God vs. King,” “King vs. God,” “MachineGod,” “Legends will Collide,” “One Will Fall,” “Godzilla Steps Up” and “Kong Steps Up,” each of which will be signed by the creator.

“I’m beyond excited to collaborate with Legendary Entertainment on such an epic event with two of cinemas most treasured IPs brought together for one earth-shattering experience. As a massive fan myself, this one is truly special for me,” BossLogic said.

Terra Virtua has also created a line of digital collectibles featuring Godzilla and Kong, which will begin rolling into the Terra Virtua marketplace in time with the movie’s March 31 release.

An NFT, which stands for non-fungible token, is a one-of-a-kind asset that allows for the sale of digital art and media; it can be purchased and sold like a piece of property, but it does not have a tangible form. Based on blockchain technology, NFTs provide a method of authenticating a piece of digital content. It’s why a screenshot of Twitter founder Jack Dorsey’s first tweet is worthless, but the NFT version sold for over $2.9 million. It’s like having a “Mona Lisa” print from Amazon, versus owning the actual painting by Leonardo da Vinci.

The “Godzilla vs. Kong”-related release is the latest NFT move within the entertainment industry. Earlier this month, Kings of Leon released their new album, “When You See Yourself,” as an NFT on YellowHeart, a ticketing platform based on public blockchain. Ten first-edition copies of Oscar-nominated documentary “Claude Lanzmann: Spectres of the Shoah” were auctioned as an NFT, with the starting price translating to approximately $375,000. The skyrocketing market for NFTS comes as a result of buyers speculating their NFTs could appreciate in value.

Watch a trailer of BossLogic’s “Godzilla vs. Kong” NFT collection below.