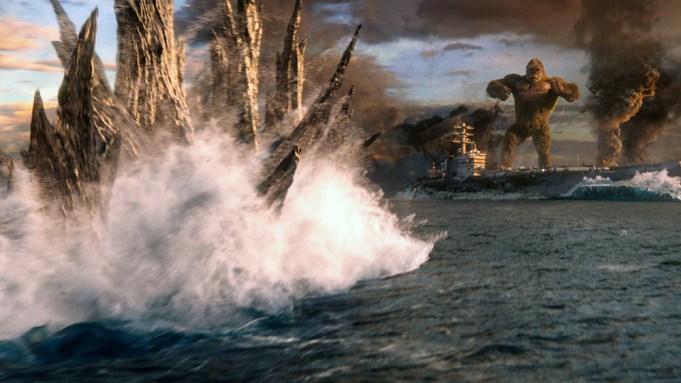 SPOILER ALERT: Do not read until you’ve seen the film!

Director Adam Wingard’s “Godzilla vs. Kong,” the latest entry in the long-running Godzilla franchise, takes the reptilian kaiju king in some bold new directions, and offers many spectacular sights that have never been seen before in a Godzilla movie. But it also pays sly homage to several previous entries in the giant monster series with a number of visual references, familiar story echoes, inside jokes, and clever Easter eggs that will reward keen-eyed fans. Though by no means a complete list, here are 10 hidden gems that you may have missed the first time around, whether in a theater or on HBO Max.

In Toho Studios’ 1967 kaiju classic “King Kong Escapes,” a nefarious scientist named Dr. Who captures Kong from his home on Mondo Island and transports him to the North Pole to mine a radioactive substance called Element X. To get the big ape from his bachelor pad in the South Pacific to the northernmost point on planet Earth, Dr. Who does what any evil genius would do: He shackles Kong’s limbs to a squad of helicopters and airlifts him 8,000 miles to the Arctic Circle. That fantastic image is faithfully recreated in “Godzilla vs. Kong.” Look for it in the scene where the Monarch team transports Kong to the Hollow Earth Launch Station in Antarctica using choppers and a net. It’s the closest the film comes to a direct visual quote of a Toho movie.

In “Godzilla vs. Kong,” the mysterious APEX Cybernetics company unveils a brand new high-tech anti-gravity craft known as a H.E.A.V., which stands for Hollow Earth Aerial Vehicle. It’s a levitating shuttle capable of transporting people and equipment down below the planet’s mantle. What makes this craft particularly interesting to Godzilla fans is how incredibly similar it is, both visually and functionally, to the popular Super X aerial vehicle that was first introduced in the 1984 film “The Return of Godzilla.” Equipped with a variety of futuristic weapons, the Super X proved so popular with fans that it was replaced by the superior Super X2 in “Godzilla vs. Biollante” and the Super X3 in “Godzilla vs. Destoroyah.” The H.E.A.V. appears to be a modern update of these classic Godzilla vehicles.

In the 2002 film “Godzilla Against Mechagodzilla,” the Japan Self-Defense Forces build an updated bio-mechanical version of Mechagodzilla using bones from the original Godzilla’s skeleton as a sturdy understructure. This is extremely similar to the way that APEX Cybernetics constructs their version of Mechagodzilla in “Godzilla vs. Kong” by using two of King Ghidorah’s skulls as an organic hard drive. Apparently, Ghidorah’s three necks were so long that its heads communicated telepathically with each other, so in the new film, APEX turns the dead kaiju’s skulls into a living supercomputer. By hardwiring DNA directly from Ghidorah’s skulls, APEX is able to create a telepathic link that allows a human pilot to operate Mechagodzilla remotely by will alone. Meaning that in both movies, Mechagodzilla contains material from dead monsters.

The cheesy 1962 epic “King Kong vs. Godzilla” is famous for its over-the-top monster fight choreography, particularly the memorable moment when Kong rips a tree out of the ground and shoves it down Godzilla’s throat like he’s plunging a clogged toilet. That hilarious move is so beloved by fans, it’s become a popular online GIF that regularly turns up on Godzilla discussion forums. So it’s no surprise that the exact move is replayed once again in “Godzilla vs. Kong.” This time, however, instead of a tree, Kong shoves the wooden handle of his axe down Godzilla’s throat and gives him something to chew on.

The Fire Down Below

Much of the action in “Godzilla vs. Kong” takes place in a subterranean world known as Hollow Earth; a cavernous region located deep below the planet’s crust that’s filled with miraculous sights and deadly monsters. Although clearly inspired by the science-fiction novels of Jules Verne and Edgar Rice Burroughs, ancient underground civilizations are not new to the Godzilla franchise. In some ways, Hollow Earth resembles Seatopia, a vast nation hidden beneath the Earth’s surface that was introduced in the 1973 pic “Godzilla vs. Megalon.” Both films present secret realms where human-like societies existed in relative harmony with their kaiju overlords.

In “Godzilla vs. Kong,” young actress Kaylee Hottle plays Jia, an orphan of Skull Island who shares a unique bond with Kong. But the film also suggests that she may have a psychic connection with Godzilla as well. After all, while transporting Kong across the ocean, she’s able to sense Godzilla’s underwater approach and rushes to warn the rest of the ship. The psychic link between humans and kaiju has been explored in several other Godzilla movies of the past, particularly in the reoccurring character of Miki Saegusa, played by Megumi Odaka. Saegusa was an instructor at an institution for psychic children, and – like Jia – was able to telepathically communicate with Godzilla in six films from the Heisei era. Jia is also the latest addition to a long line of children in kaiju films who share a special connection with giant monster. Similar kiddie characters appear in a number of Toho entries, like “Son of Godzilla” and “All Monsters Attack.”

It’s not just Toho’s monster movies that the new film echoes. Several moments in “Godzilla vs. Kong” appear to reference images from the groovy 1976 version of “King Kong.” The sight of a despondent Kong locked on a ship that’s transporting him across the ocean to an unfamiliar world is almost an exact lift from director John Guillermin’s bicentennial monster movie. Likewise, the image at the beginning of “Godzilla vs. Kong” where Kong is seen bathing in a waterfall recalls the unforgettable sight of Kong bathing Jessica Lange beneath a similar waterfall in the ’76 film. Kong’s battle with the flying snake-like Warbats in the new movie also duplicates several specific shots from a similar battle Kong fought with a giant snake in the ’76 movie.

Each film in the MonsterVerse saga offers hidden details about the kaiju in their credit sequences, and “Godzilla vs. Kong” is no exception. By freeze-framing the fast-moving opening titles, attentive viewers can pick up all kinds of information. For example, if you pause the movie at just the right moments, you’ll learn that this current version of Godzilla has grown in size from the previous film, and now measures 393 feet tall. He apparently weighs 164,000 tons, which is an increase from the 99,000 tons he weighed the last time he hit the scale. He walks 18 miles per hour and has a blood volume of 530,000 gallons. Kong, meanwhile, stands only 104 feet tall and weighs a measly 158 tons. However, he does have advanced recuperative powers and a highly adaptive and resourceful intelligence to make up with his relative lack of size in comparison to Godzilla.

The plot of “Godzilla vs. Kong” contains several direct echoes from Toho’s classic mid-70s double-feature of “Godzilla vs. Mechagodzilla” and “Terror of Mechagodzilla.” In each film, for instance, Godzilla is initially perceived as a destructive threat, but is eventually revealed to be a relatively innocent victim of mistaken identity. Also during the monster fights in each movie, Godzilla and Mechagodzilla fire their atomic breaths directly at each other at exactly the same moment — crossing their streams, so to speak – and the two atomic blasts battle for dominance, with Mechagodzilla’s winning each time. Finally, in each film, including the new one, Mechagodzilla is defeated with a beheading. In the Toho movies, it’s Godzilla who rips his metallic opponent’s head off. But in “Godzilla vs. Kong,” it’s Kong who does the honors.

Several new monsters are seen during the film’s Hollow Earth sequence, and one of them appears somewhat similar to a familiar kaiju from Godzilla’s Showa era. The reptilian creature in question briefly enters from the right side of the screen and eats a giant crab that’s passing by. With its chonky body, roughly scaled back, and flat-faced head, this lumbering four-legged beast bares a passing resemblance to the beloved Baragon, who costarred in Toho’s “Destroy All Monsters” and “Godzilla, Mothra and King Ghidorah: Giant Monsters All-Out Attack.” Although it doesn’t sport Baragon’s floppy ears and forehead horn, perhaps this kaiju is a baby Baragon of some kind? Or maybe it’s a Baragon of a different sex than the original? Since Baragon was a subterranean burrower, the fact that this new creature also dwells beneath the Earth could be a further connection with the original.