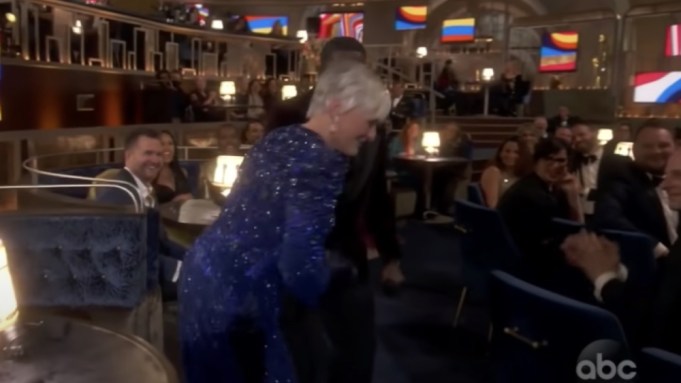 From Public Enemy’s “Fight the Power” drowning out an announcer to Rita Moreno walking on to the theme of “The Electric Company,” the ‘70s childrens’ TV show in which she starred, there was never any question who was behind the ones and twos at the Oscars on Sunday night: Questlove, Roots co-founder and drummer, musical director of both the Oscars and “The Tonight Show Starring Jimmy Fallon,” director of the forthcoming “Summer of Soul” documentary and a walking music Wikipedia.

While his thumbprint was obvious in virtually every music cue on the show, his influence was also obvious in at least one point of the show. Deep into the second hour, the otherwise very serious show made a turn toward humor when several actors were subjected to an Oscar-music trivia quiz conducted by actor Lil Rel Howery, but showing the kind of knowledge that Questlove can rattle off the top of his head — and not only because the first question was about Prince, who is not only one of Questlove’s biggest influences but also was a friend and sometime collaborator.

The questions were about whether or not a classic song had won or been nominated for an Oscar, and was first turned to an understandably nervous Andra Day — who was waiting to find out whether she’d won Best Actress — about whether “Purple Rain” had won an awards, a tricky question since the film won for Best Score, but the song did not. However, Day’s correct answer was apparently too colorful for the show’s censors, since her answer was muted. Next up, Daniel Kaluuya, with his Oscar sitting on the table, admitted he was too young to know whether Donna Summer’s “Last Dance” had won (it did, in 1979, for “Thank God It’s Friday”).

But as the strains of EU’s go-go classic “Da Butt” filled the room, Close gradually identified the signature track from Spike Lee’s 1988 film “School Daze” — which was neither nominated nor won — but quickly reeled off an encyclopedia entry about the song and its creators. Asked by Howery if she knew the dance, she gamely got out of her seat and rocked it — in a way more than a little reminiscent of her moves in a film that even predates “School Daze,” 1983’s “The Big Chill,” when she and a kitchen filled with old college friends start rocking to the Temptations’ “Ain’t Too Proud to Beg.”

Is Glenn Close truly a deep scholar of go-go music from the ’80s? Of course not — a source confirmed to the Los Angeles Times that it was scripted, but it was fairly obviously the work of Questlove and show producer Jesse Collins, who not only are friends but collaborated on segments for last year’s BET Awards, as they told Variety in an interview last week.

Scripted or not, the moment provided a too-rare moment of humor during the show. Neither Questlove nor Lee immediately responded to Variety’s requests for comment.