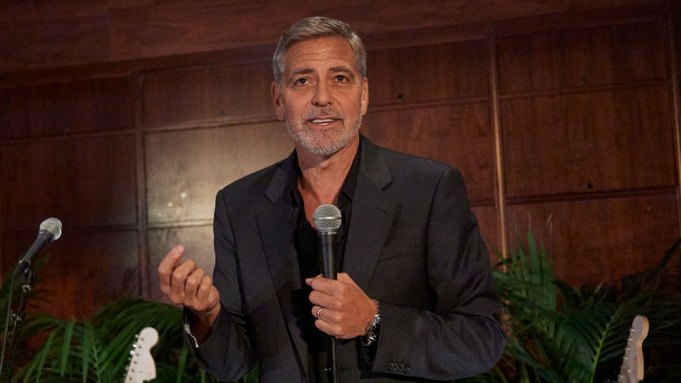 Don’t look for George Clooney to reprise his role as Batman in the upcoming “The Flash” movie like Ben Affleck and Michael Keaton will be doing.

“They didn’t ask me,” Clooney told me Sunday night at a special screening of “The Tender Bar,” the coming-of-age drama he directed that stars Affleck, Lily Rabe and Tye Sheridan. “When you destroy a franchise the way I did, usually they look the other way when ‘The Flash’ comes by.”

“He won’t let me watch it,” Clooney’s wife Amal told me.

George added, “There are certain films I just go, ‘I want my wife to have some respect for me.’”

When Amal commented that their twins Alexander and Ella will want to see it, George cracked, “It’s bad when your four-year-old kid goes, ‘This sucks.’ That could be painful.”

“The Tender Bar” marks a reunion for Clooney and Affleck after they teamed up to produce “Argo,” the 2012 political thriller that went on to win three Oscars, including the top prize of best picture. Clooney joked that it took nine years for them to make another movie together because Affleck “screwed up the Batman franchise that I made so solid.”

“The Tender Bar” is based on Pulitzer Prize-winning journalist J.R. Moehringer’s memoir of the same name about his relationship with his Uncle Charlie (Affleck), who became a father figure to him while growing up on Long Island. Rabe plays his mother while Christopher Lloyd is his grandfather. Newcomer Daniel Ranieri plays a young J.R. NS Sheridan portrays him during his years at Yale and as an aspiring newspaper reporter. “It was a really beautiful script and Ben came on board really early on so we just thought we’d have a blast,” Clooney said.

“The Tender Bar” will be released in theaters in New York City and Los Angeles on Dec. 17, followed by a nationwide rollout on Dec. 22. The film will available globally on Amazon Prime Video on Jan. 7, 2022.