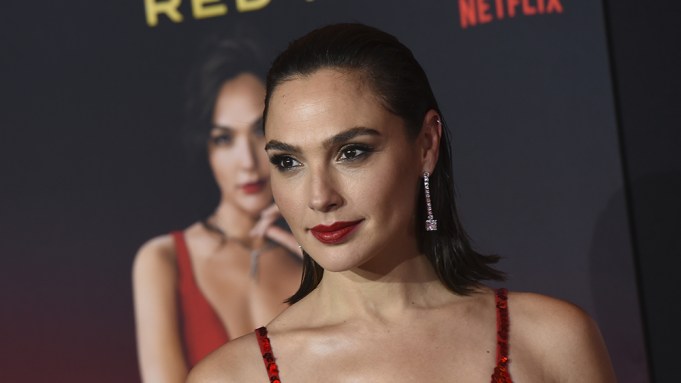 Gal Gadot will soon take on another iconic character in a live-action adaptation of a classic story: the “Wonder Woman” star is set to play the Evil Queen in Disney’s upcoming “Snow White” remake.

Gadot was beaming while speaking for her first time about her villainous Disney role.

“I’m so excited,” she told Variety on Wednesday night at the premiere of her new action film, “Red Notice,” which launches Nov. 12 on Netflix.

When asked what attracted her to the role of the Evil Queen in this iteration of “Snow White,” Gadot gave a major smile, but refrained from giving away too many details on the storyline.

“There is so much that I cannot share with you that will actually answer this question,” Gadot said, “But the take on this story is so different and delightful and full of joy… I’m very, very excited. I wish I could share more.”

Gadot’s casting was reported to be in final negotiations on Wednesday. The film will have the “Wonder Woman” A-lister starring opposite “West Side Story” breakout Rachel Zegler, who will lead as the titular Disney princess.

In the classic fairytale, which was Disney’s first animated feature in 1937, the Evil Queen attempts to trick Snow White into eating a poisoned apple after becoming jealous of her beauty. The villain is known for the famous line: “Mirror, mirror on the wall, who is the fairest of them all?”

When asked to give her best “mirror, mirror” reading on Wednesday’s red carpet, Gadot held off, joking, “Are you crazy?!” Gadot exclaimed. “I want you to come to the movie.”

Gal Gadot's keeping her Evil Queen impression under wraps until it's time to watch her #SnowWhite live-action remake in theaters: "Now, are you crazy? No! I want you to come to the movies." https://t.co/jyWkg31geN pic.twitter.com/lPIJc1sxeB

Production on the Disney film is expected to begin in 2022. No premiere date has been set.

Gadot’s slate is incredibly full, as the Israeli-born actor and producer continuously rises further up on Hollywood’s A-list with each new role she lands. After the major success of “Wonder Woman” (2017) and its sequel (2020), a third film is coming in the DC Comics franchise, with director Patty Jenkins returning to helm the follow-up. When announced, Warner Bros. said “Wonder Woman 3” would be put on the fast-track.

Asked for an update on the third flick at Wednesday’s “Red Notice” premiere, Gadot did not disclose whether she’d head into production first on “Wonder Woman 3” or “Snow White.” But, she did say that the superhero script is currently in the works. Of course, she stayed mum on any storylines.

“I can’t tell you yet,” she responded when asked for a timeline on the third “Wonder Woman.” She added, “But we’re working on the script.”

As for “Red Notice,” Gadot teamed up with Dwayne Johnson and Ryan Reynolds for the upcoming Netflix action-comedy, directed by Rawson Marshall Thurber.

“It was crazy fun,” Gadot said, recalling her time on-set with her two A-list co-stars, who she says constantly teased one another while filming. “The biggest challenge for me was not to break takes just laughing.”

Given her superhero skills, Gadot was asked to judge who might win in a fight between Johnson and Reynolds.

“Wow, I don’t know,” she quipped. “I think that Dwayne is really strong, and I think that Ryan can run really fast.”