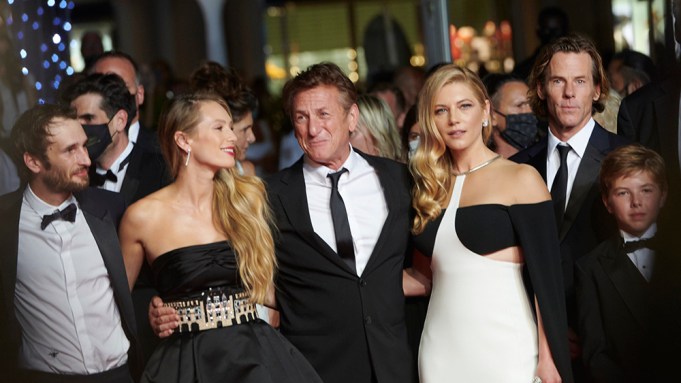 Not to be outdone by Matt Damon, Sean Penn looked like he was about to cry at the Saturday night premiere of “Flag Day.”

The drama earned a four-minute standing ovation broken up by remarks from Penn, praising his daughter, Dylan Frances Penn, for her debut lead role in a movie.

Penn takes on double duties in the film, as both director and actor, playing John Vogel, a real life bank robber and con artist. The character’s birthday falls on June 14, thus inspiring the film’s title.

Dylan plays his daughter Jennifer, an aspiring journalist who struggles with her fractured relationship with her family.

“To this cast, this crew, this audience and, in particular, this daughter — thank you,” Penn said.

“Flag Day” is based on Jennifer Vogel’s 2004 memoir. The film is a family affair for Penn. Dylan’s younger brother Hopper plays her character’s adrift sibling onscreen.

The film seemed to fare better than Penn’s last outing at Cannes — for the drama “The Last Face” in 2016, which was booed by critics.

But the 10 p.m. screening of “Flag Day” didn’t electrify the Palais crowd in the same way as other films that have played in competition at the 74th annual Cannes Film Festival.

Audience members were spotted dozing off in their seats, and a smattering of people made their way to the exit during the film’s slower second hour.

“This was a terrible movie,” said one audience member.

Jez Butterworth adapted the script. Penn has said in recent interviews that the property was developed with Dylan in mind. Julia Roberts’ husband Danny Moder served as the director of photography.

“Flag Day” follows a string of emotional premieres at a festival that many in global cinema believed was impossible to stage as the world struggles with the coronavirus pandemic.

Spirits have been high. Damon burst into tears following the premiere of Tom McCarthy’s “Stillwater” on Wednesday night. At Friday evening’s annual Chopard gathering, jury president Spike Lee, juror Maggie Gyllenhaal, and Jessica Chastain said they were overwhelmed to return to large theatrical movies after a year-and-half in quarantine