‘F9: The Fast Saga’ Trailer: Director Justin Lin on Paul Walker, Wild Stunts and ‘the Final Chapter’ of the Franchise 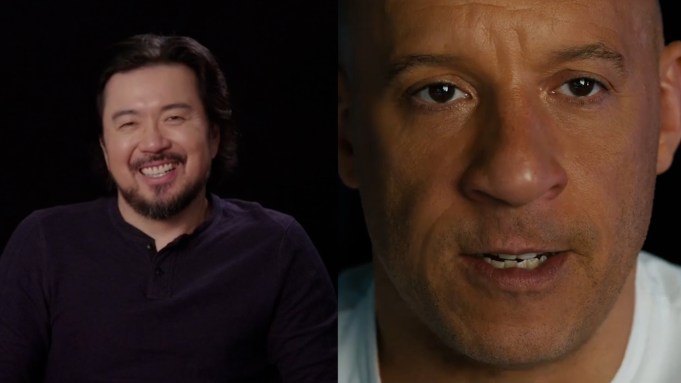 Debuting just over a year after “F9: The Fast Saga” was originally set to open in theaters, the new trailer for the latest installment in the 20-year-old film franchise showcases even more wild vehicular shenanigans deployed by Vin Diesel’s Dom, Michelle Rodriguez’s Letty, and the rest of the “Fast & Furious” family. (It’s embedded below.) Much of the trailer depicts an extended sequence involving a car with a massive magnet so powerful, it can apparently lift a car right from the road. We get a few more morsels of info about the highly antagonistic relationship between Dom and his brother Jakob (John Cena), who appears to have teamed up with Charlize Theron’s Cipher, the villain from 2017’s “The Fate of the Furious.” There are a couple more shots of Sung Kang’s Han, but no hints yet as to how, exactly, the fan favorite character has returned from the dead. Oh, and Tyrese Gibson’s Roman, and Ludacris’ Tej appear to blast off into space.

All of it is meant to launch what director Justin Lin calls “the final chapter” of the “Fast & Furious” saga. After directing four of the films back-to-back, Lin stepped away from the franchise after he felt he’d left it all on the table with 2013’s “Fast & Furious 6.” Diesel, however, persuaded him to return with the promise that he could give the franchise and its characters a proper send-off with “F9” and the tenth and eleventh films in the main saga — which Lin will shoot as a climactic two-parter, a la “Infinity War” and “Endgame.”

Lin talked with Variety about why he decided to come back, how he crafts those wild action sequences, and why it was important for him to remind the audience that Brian O’Conner, the character played by the late Paul Walker, is still very much alive.

There’s a lot of business in the trailer with a giant magnet. In planning that kind of sequence out, what is the ratio of using sophisticated animatics versus Hot Wheels cars? How much are you wanting to play with something tactile?

I can actually walk you through it. I think if you came and hung out with us, it literally is, you know, me and my team and we’re playing with cars. I actually brought my son. We’re in London, and he’s like, “Wait, you just go to work and you hang out with your friends and play with toy cars?” It’s great to talk character and we keep playing and then once the character beats are captured, then the hard work [begins] of, “OK, now we got to scan the right environment, and then we started choosing the lenses, the camera moves, how we’re going to cover it. I have all that designed, and then I go to the stunt crew, and then they bring back the [toy] cars, so that they can translate it into their language.

So the element of play, you know, is a big part of this process. I think through time, we’ve developed our own way of communicating. There’s been times where I’ll be in London, and they’re trying to do a move in Tbilisi, and I’m jumping on the phone walking the driver through the state of Letty at that moment. I think that’s what makes it so much fun. We never take things for granted. It has to come from the state of the character. For the driver to hear it and execute it, and then you see it, it’s the best feeling, because by at that point, oh my god, it’s been 14 months to go from idea to execution.

We also see a brief glimpse of the late Paul Walker’s character Brian O’Connor. Obviously, Jordana Brewster’s character Mia, who’s Brian’s wife, plays a big role in “F9” — so I take it that Brian is is looking after their kids? Is that the idea here?

The idea of Brian O’Connor still alive in this universe, it’s very impactful and it’s very important. When we talk about “Fast 9,” this is the first time for me creatively approaching it not as just the one film. In the past, I’ve always felt like, we’re lucky enough to do one, let’s do everything we can. But Vin finally talked me into it, you know, when I came back, he’s like, “Well, let’s think about it as a final chapter.” So “Fast 9” is really the beginning of the final chapter of the saga. So in doing that I think there’s a lot of room to really place our characters, and Brian obviously is a big part of the universe still.

Did you feel like it was important to like to show us Brian versus having somebody just sort of say, “Oh he’s off somewhere, doing his own thing”?

I think that’s always an issue. I want to always be very respectful and how we present that. I think that [in] Nine, you will feel the presence of Brian, for sure.

It also appears as though the women are more central to the action in this one. Why was that important?

I’ve heard that. People are pointing that out. I think in the process, it was never any different for me. I love the characters since I’ve joined the franchise, and the fact that Michelle or Jordana or Gal [Gadot, from “Fast & Furious,” “Fast Five” and “Fast & Furious 6”], we’ve all been able to be part of this family and to be able of grow together. It’s been very special and I know it’s very rare in Hollywood, especially doing the sequels, where we’re not doing the same thing over and over. I think these characters are maturing. They’re evolving and we’re acknowledging that. That’s very important. I think maybe also, I’ve been gone, I just felt like there was a need to kind of catch up with a lot of these characters very organically.

I don’t know what came before me, but I remember Michelle coming in, going, “Oh man, I really want to get going!” I was like, “Yeah, yeah, we’re doing that.” And so it was kind of like we’re already in line, it wasn’t, you know, a talk. For me, it’s nothing strategic except, you know, let’s do the right thing, let’s do what’s right for this next chapter.

Speaking of, how far along are you in developing the two-part finale?

Do you anticipate you’ll start shooting this year?

No, probably not this year. I’m not quite sure when. You can never have enough time in development with these films. Even though I think there’s some ideas, I don’t think we’re going to be shooting this year.

This interview has been edited and condenced.

Watch the new trailer below: