The longtime collaborators look back on their evolution from 'Better Luck Tomorrow' to 'The Fast and Furious: Tokyo Drift' 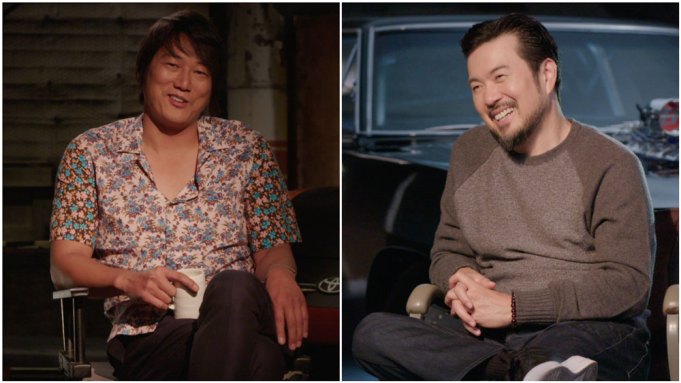 When the first trailer for ‘F9’ debuted in 2019, there was a collective gasp/squeal/scream among the “Fast” family when Sung Kang’s Han Lue made a surprise appearance at the clip’s end, with snack bag in hand.

Fans have been in a state of perpetual mourning since the ultra-cool (and always-hungry) character died midway through “The Fast and Furious: Tokyo Drift.” Of course, Han was then resurrected before, starring in the fourth, fifth and sixth installments of the franchise thanks to the reorganized timeline.

But audiences were in for a second round of devastation when, at the end of “Fast & Furious 6,” they learned that Han’s death was not a random accident, but instead orchestrated by Deckard Shaw (Jason Statham) in a revenge plot against Dom’s crew.

So how is Han back for “F9”? And what does that mean for the future of the franchise?

We’ll let you watch the movie to see how Han returns (and where he’s been all this time), but Kang and director Justin Lin explain why it was so important to bring the character back into the fold.

The experience of resurrecting Han has been “humbling in every way,” Kang tells Variety, saying he’s honored by the fans’ undying support, namely the hashtag campaign #JusticeForHan.

The social media movement kicked off after Shaw was essentially retconned to become a full-fledged Fast Family member, after saving Dom’s (Vin Diesel) son from the clutches of Cipher (Charlize Theron) in an admittedly incredible fight scene involving a plane and a baby carrier in “Fate of the Furious.” But fans were concerned to see the antagonist welcomed in with open arms without much attention paid to the Han of it all. Thus, the hashtag #JusticeForHan was born.

“That a character that I got to play as an actor is so beloved, that caused this hashtag to bring him back, that’s a Hollywood fairy tale to be a part of,” he continues. “This is the stories [I’d] read about when I was a kid, that there was some fan petition to bring an actor back or character back to some show. It’s so amazing to be a part of that.”

“I give the fans 100% credit for this,” Lin agrees, noting that while Han’s return is in service of the audience, it’s not just fan service. When he first heard about the #JusticeForHan fan campaign, he didn’t know what it was all about.

“When I asked about it, and they told me, then I was baffled — I really was — and probably upset,” he recalls. “This is one of the most beloved characters, and it felt like it was just being treated as if he was nothing. So, when I came back, I thought, ‘Well, we’re gonna have to do something about it.’

Lin continues: “And now, looking back, I feel like [the story arc] was a gift. Because if that never happened, I wouldn’t have brought Han back. And now the fact that that all happened, now Han gets a change to come back So to be able to build that is very meaningful.”

The love for the fans runs deep. And, over the 15 years and four movies Lin’s been involved in with the “Fast” franchise, the level of care from the fans has only grown: “It just means so much to me,” he adds.

While “The Fast and Furious” franchise turned 20 on Tuesday, just ahead of the “F9” release, “Better Luck Tomorrow” will celebrate the two-decade anniversary of its Sundance Film Festival debut in January. The high school-set indie drama, starring Kang, Parry Shen, Jason Tobin, Roger Fan and John Cho, is about a group of high-achieving Asian American students who engage in some petty crime on the side, until the lifestyle leads them down a murderous path.

While “Better Luck Tomorrow” isn’t part of the “Fast” canon, the movies are forever linked in fans’ minds, given that the characters share a name and similar mannerisms. As such, the appearance of Han in “Tokyo Drift” could be considered the character’s first rebirth. And the evolution of the character has paralleled that of Kang and Lin’s partnership and friendship over the years.

“When we shot ‘Better Luck Tomorrow,’ the first day I went to set, our craft service was a box of Entenmann’s doughnuts, and five sticks of Wrigley spearmint gum. It still said 25 cents on it,” Kang recalls.

Fast forward four years and the experience was vastly different, Kang explains, recounting the first time he visited Lin at his office after the director booked “Tokyo Drift.”

“We’re walking through and there’s all the people working on the movie, and they’re like, ‘Hello, Justin. Hello. Hello,'” he says. “Then we get into his office, we closed the door. He has a loaded refrigerator with all this Snapple. … And we just started laughing. We’re like, ‘Yo, you’ve got two chairs. You got unlimited Snapple. There’s people actually answering the phone for you. Look where we are, we are in the gates of Universal Studios. This is the dream.'”

“To be able to share that moment with a friend that understands where we came from, from that box of Entenmann’s doughnuts and to be able to live our dream together, I’ll never forget that moment,” Kang adds.

Looking ahead, with Han back in the picture and Shaw having been invited to the Toretto family barbecue after rescuing Dom’s son at the end of “Fate of the Furious,” some sort of confrontation between the men was inevitable.

SPOILER ALERT: Do not read past this point if you have not seen “F9.”

In ‘F9’s’ mid-credits sequence, Shaw is seen working out with a punching bag that is revealed to have a man he’s trying to get information out of inside it. When the interrogation is interrupted by a knock at the door, Shaw gets that surprise of his life when Han is standing on the other side.

It’s a great tease for what’s to come in the planned tenth and eleventh installments of the franchise. When it comes to the Han vs. Shaw showdown, Kang thinks that despite what transpired (aka Shaw trying to murder Han), their future doesn’t have to be quite so violent.

“Jason Statham is a pretty amazing fighter in real life. He’s a martial artist and I know no martial arts,” Kang quips. “Han is a lover not a fighter.”