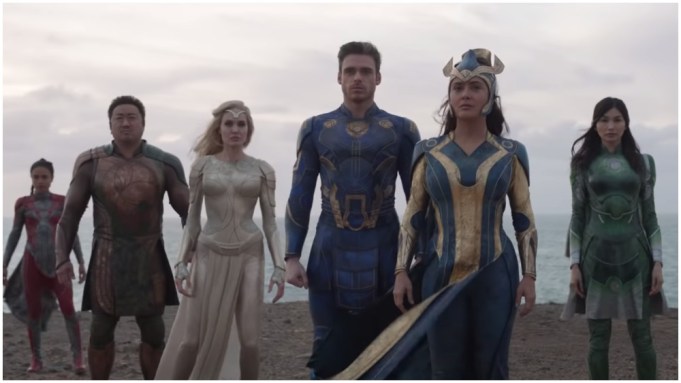 The Marvel Cinematic Universe’s latest space outing follows an immortal alien race, called the Eternals, who have secretly lived on Earth for thousands of years and possess different powers and abilities, including super strength and the ability to fly.

The film, which has been dubbed by many as “Marvel’s most ambitious film yet,” follows 10 heroes: Gemma Chan as Sersi, Richard Madden as Ikaris, Kumail Nanjiani as Kingo, Lia McHugh as Sprite, Brian Tyree Henry as Phastos, Lauren Ridloff as Makkari, Barry Keoghan as Druig, Don Lee as Gilgamesh, Salma Hayek as Ajak and Angelina Jolie as Thena. Kit Harington plays human Dane Whitman, a.k.a. the Black Knight.

Marvel released a teaser (set to the tune of Skeeter Davis’ “The End of the World”) back in May, but “The Eternals'” final trailer, which dropped in the early hours on Thursday, feels more serious in tone and presents the Eternals grappling with the prospect of emerging after centuries living apart in order to help humans.

Harrington’s human character Dane is seen asking Chan’s Sersi why the Eternals didn’t get involved in the fight against Thanos, a destructive force that annihilated half the population of the universe five years prior. “We were instructed not to interfere in any human conflicts unless Deviants were involved,” Sersi responds. However, the Eternals gradually assemble to fight together as a group.

In a new interview with Entertainment Weekly, Zhao discussed a scene shot at Fuerteventura in the Canary Islands on a rugged ledge overlooking the sea.

“We had our whole cast standing on that cliff in their costumes, and we played really loud operatic music on the speaker, just blasting that through the wind,” Zhao said. “Seeing my cast coming together in formation as the Eternals, with the beauty of this ancient-looking landscape, and the ocean and the sky… it was pretty awesome.”

Zhao recently became the second woman in history to receive an Academy Award for best director, honored for her best picture-winning film “Nomadland.”

In the EW interview, Nanjiani said of the groundbreaking director: “She’s just one of the greatest filmmakers ever, and she’s at the height of her powers right now. Working with someone like that, you’d think it’d be intimidating, but it was the opposite.”

Watch the new trailer below.