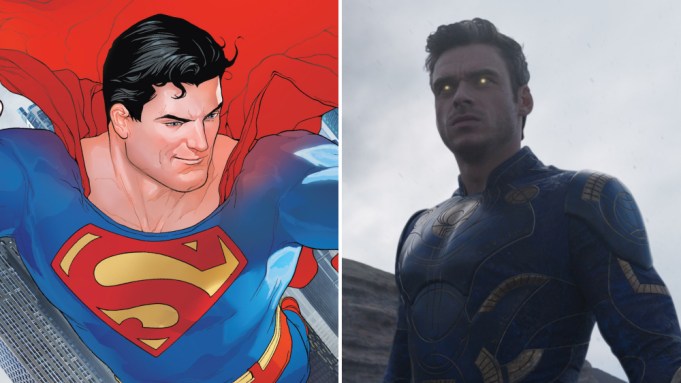 SPOILER WARNING: This article discusses brief references in Marvel Studios’ “Eternals” that, while in no way related to the plot of the film that opens on Nov. 5, could be considered spoilers.

A throwaway pop-culture reference in a Marvel Studios movie is usually as common as a form-fitting unitard. But when Disney released a featurette last week for Chloé Zhao’s “Eternals,” in which a child refers to the Eternal named Ikaris (Richard Madden) as “Superman,” the moment was enough to launch dozens of deep-dive reaction videos and head–spinning tweets wondering “What does this all mean?!”

In the scene in question, Ikaris and Sersi (Gemma Chan) are at the home of Phastos (Brian Tyree Henry), a fellow Eternal who has started a family with his human husband, Ben (Haaz Sleiman), and their child, Jack (Esai Daniel Cross), who saw Ikaris fighting an evil Deviant on TV.

“Dad, that’s Superman!” Jack says to Phastos, pointing at Ikaris. “With the cape, and you were shooting laser beams out of your eyes!”

To which Ikaris quips, “I don’t wear a cape.”

The implications of the scene immediately turn heads. The Marvel Cinematic Universe, in which “real” superheroes like Thor, Captain Marvel and Black Panther are household names, now contains the fictional icon Superman, who launched the entire superhero genre as the figurehead of Marvel’s lifelong competitor, DC Comics.

So, whose decision was it to make the Man of Steel canon in the MCU?

“I take responsibility for that,” Zhao told Variety.

And according to the Oscar-winning filmmaker, who wrote the screenplay with Patrick Burleigh, Ryan Firpo and Kaz Firpo, the moment wasn’t much of a discussion with Marvel Studios chief Kevin Feige.

“You write it on the page, show it to Kevin, if he doesn’t say anything, that’s a go,” Zhao said with a laugh. “I don’t think there was a conversation. Not really, except, he goes, ‘Oh, that’s cool.'”

For Zhao, it all comes back to the central conceit of “Eternals,” that the 10 characters at its center arrived at the dawn of human civilization and not only helped to shape human advancement, but inspired our oldest myths. Angelina Jolie, for example, plays Thena, the goddess of war, like the Greek god Athena. Don Lee plays the strongman Gilgamesh, like the “Epic of Gilgamesh,” one of the oldest stories ever written.

“We’re playing on a genre that draws so much from mythology, and Superman, for example, was created in the comics and also by these brilliant filmmakers along the way — they’re modern reinterpretations of a mythical characters that exist in different cultures,” Zhao said. “Ikaris is our interpretation of it. It doesn’t mean we can’t pay tribute to the really iconic version that we’ve all grown to love and has influenced us.”

Superman isn’t the only DC character to get a shoutout in “Eternals,” either. When Gilgamesh reunites with Kingo (Kumail Nanjiani) and meets Kingo’s (human) valet, Karun (Karish Patel), Gilgamesh calls him “Alfred” — i.e. Batman’s butler.

In explaining why, Zhao was also clear that these DC characters are just that in the MCU: fictional characters, designed to delight audiences and readers.

“Gilgamesh and Phastos, they all got into certain aspects of human life, whether it’s cooking, pop culture, movie loving,” Zhao said. “So they pick out the things about humans that they love the most — aspect of us that are quite extraordinary. And for Gilgamesh, he watches ‘Batman.’ So when he sees someone’s valet, he goes, ‘Ah, I know!’ Because he loves Batman, like so many of us.”

DC and Marvel’s respective hardcore fans have spent decades stoking a deep-seated rivalry between each other, but Zhao hopes that audiences for her film take these references from a place of respect.

“Everything that’s referenced in this film, whether it’s in words or visually, is a tribute,” Zhao said. “It’s out of love and our admiration for these characters.”