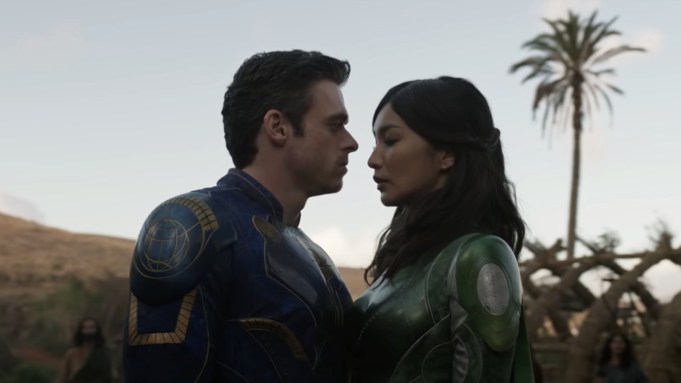 Of all the movies on Marvel Studios’ upcoming slate, “Eternals” has been the most mysterious, between its sprawling and multicultural ensemble, its Oscar-winning auteur director in Chloé Zhao and its story of a race of immortal beings who have secretly been on Earth for millennia. With the teaser trailer finally released to the world, we now have a greater sense of how Zhao will be integrating her unique cinematic eye to the Marvel Cinematic Universe, and how the Eternals will fit inside the MCU.

The Eternals are an integral — but invisible — part of human history

Set to Skeeter Davis’ haunting song “The End of the World,” we first meet the Eternals as their massive, totemic ship appears before a small tribe of early humans, many thousands of years in our past. As the Eternals’ leader Ajak (Salma Hayek) explains in voice-over, the Eternals have “watched, guided, and helped [humanity] progress” — including everything from causing water to sprout for farming to a shot of the ancient capital city of Babylon. While Ajak says the Eternals have “never interfered” in human history, the implication is humanity wouldn’t be where it is today without the Eternals quietly pulling strings in the background.

They know about Iron Man, Captain America and the Avengers

After the events of “Avengers: Infinity War” and “Avengers: Endgame,” you’ve got to wonder: If the Eternals are so powerful, why didn’t they help stop Thanos’ attempt to erase half of all life in the universe? We’ll probably need to buy a movie ticket to get the answer to that question, but at least the button of the teaser — with Lia McHugh’s Sprite asking who is going to lead the Avengers now that “Captain Rogers and Iron Man are both gone” — makes clear the Eternals know who the Avengers are. Note that Sprite says “Captain Rogers” and not “Captain America,” suggesting she also knows that Sam Wilson has taken up that mantle.

Richard Madden’s Ikaris suggests he could lead them, which causes everyone else to laugh. Ikaris seems to chuckle along, but could this mean the Eternals will finally reveal themselves to the world?

Something finally forces the Eternals to “interfere”

The main antagonist in “Eternals” will reportedly be the the Deviants, a similarly long-lived race of super-powered beings who are — in the comics, anyway — as physically hideous as the Eternals are strikingly beautiful. There are a few brief shots in the teaser that appear to establish the Deviants: Kumail Nanjiani’s Kingo sliding underneath an ominous, hulking black monster, and a group of dead-eyed farmers raising weapons in unison.

The moment Marvel Studios announced that Zhao would be directing “Eternals,” fans of the filmmaker and of Marvel alike began wondering how much of Zhao’s singularly intimate and beatific approach to filmmaking would make it into the movie. From the opening shots of the teaser, however, it’s plain that this is unquestionably a Chloé Zhao movie. There was a curious lack of heavy action beats in this teaser — mostly Angelina Jolie’s Thena posing moodily with various weaponry — so it remains to be seen how Zhao’s feel for action spectacle will vibe with Marvel’s famously collaborative approach to filmmaking.

Zhao’s imprint on this movie is so strong, she’s actually credited twice for writing the screenplay: Once for writing individually, and then again for writing in collaboration with Patrick Burleigh (“Peter Rabbit 2: The Runaway”). (The “story by” credit goes to Ryan Firpo & Matthew K. Firpo.)

Gemma Chan’s Sersi indeed appears to be the lead

In April, Marvel Studios chief Kevin Feige told Variety‘s Kate Aurthur that “if there was a lead in this ensemble, it is Sersi, it is Gemma Chan.” The teaser certainly bears that out, making Cersi its main visual through line. She’s the one who, with Ikaris, first lays eyes on Earth from their ship. She’s the one who appears to leap in time from antiquity to modern day. We see her embrace Ikaris, seemingly over thousands of years. And we see her, briefly, with Kit Harington’s Dane Whitman, a character with his own storied history in Marvel comics — that was left a mystery for now.

We still don’t know whether Dane Whitman is also the Black Knight by the time we meet him in “Eternals.” But in the comics, the character has also lived through many centuries thanks to the Ebony Blade, a nearly indestructible sword that also curses anyone who wields it.

We also don’t get a sense in the teaser about where the Eternals come from. In the comics, they’re created by the Celestials, a race of nearly all-powerful creatures that predate practically everything in the universe. The Celestials have popped up in the MCU a few times before: In “Guardians of the Galaxy,” we see a Celestial use the Power Stone to destroy a planet; and in the sequel, we learn that not only is Peter Quill’s father Ego (Kurt Russell) a Celestial who’s become a living planet, but he has designs to remake the entire galaxy in his own image.

Which is to say, to date, the Celestials haven’t exactly presented themselves as benevolent overseers of the universe — in the comics, they also created the Deviants.

Zhao’s previous films have all examined the ways in which individual lives are irrevocably shaped by greater forces they can’t control. So perhaps its fitting that her first foray into big-budget studio filmmaking deals with the god-like Eternals still not being able to escape the whims of their own creators. Heavy stuff for a superhero movie!