Director Denis Villeneuve and Warner Bros. Want to Make ‘Dune: Part II.’ So Why Hasn’t the Sequel Been Announced Yet? 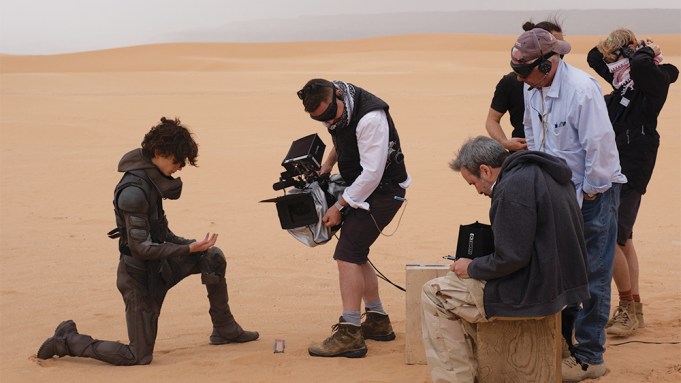 Years ago, filmmaker Denis Villeneuve had agreed to adapt “Dune,” Frank Herbert’s seminal sci-fi novel, under one condition: the sweeping saga about warring political dynasties that clash over access to a vital planet could not be confined to only one movie.

“The story is so rich and complex that, in order to be faithful to the book, we’ll need to make at least two movies,” Villeneuve explained in 2020. “That was a deal right at the start.”

Days before the first installment — starring Timothee Chalamet, Oscar Isaac, Zendaya, Rebecca Ferguson, Josh Brolin and Jason Momoa — premiered in theaters and on HBO Max, WarnerMedia executive Ann Sarnoff strongly suggested a follow-up would be imminent. “Will we have a sequel to ‘Dune’? If you watch the movie you see how it ends. I think you pretty much know the answer to that,” she said in a recent interview with Deadline.

After several pandemic-related delays, the Warner Bros. film opened in the U.S. and Canada over the weekend, collecting a better-than-expected $41 million in ticket sales. It landed the biggest three-day total for the studio since it began its day-and-date strategy on HBO Max, a surprising feat since blockbuster-hopefuls like “The Suicide Squad” and “Space Jam: A New Legacy” — both of which hail from popular franchises — failed to match expectations in theaters as the Delta variant of COVID-19 surged. “Dune” has been playing at the international box office for weeks and has since generated a sizable $220 million globally. It may not be one for the record books, but it’s respectable tally given the dramatically altered movie theater landscape. Moreover, its current box office haul that isn’t far off from pre-pandemic projections for the cerebral sci-fi drama. It now seems possible that “Dune” could cross $300 million worldwide and potentially break even theatrically, something that’s a rarity for tentpole projects in good times and nearly impossible during a pandemic. (Even the latest James Bond film “No Time to Die” may struggle to turn a profit in cinemas.) HBO Max has not reported any viewership metrics.

So why hasn’t “Dune: Part II” officially been announced?

In short, it’s not really Warner Bros.’ decision to make, though the studio could opt not to distribute the film. However, that move seem unlikely given the positive reception to “Dune” and the media company leadership’s evident enthusiasm for all things Atreides.

Legendary Pictures, the company that co-financed “Dune” in addition to producing and developing the interplanetary adventure, owns cinematic rights to the property and therefore determines whether or not a follow-up film will take place. Oftentimes after a movie opens to No. 1 at the box office, Hollywood players would capitalize on positive headlines by fast-tracking a sequel. Case in point: mere minutes after “Wonder Woman 1984” set a then-pandemic box office record with $16.9 million in North America, Warner Bros. announced plans for a third installment with star Gal Gadot and director Patty Jenkins.

Why Legendary has yet to unveil plans for a sequel remains ambiguous, though an announcement could come shortly, according to insiders. Legendary and Warner Bros. declined to comment.

Should there be a follow-up forthcoming, Villeneuve is expected to return to the director’s chair. But it’s unclear if Warners insiders have seen a script or a proposed budget. There’s plenty of story left to tell, of course. The Frank Herbert novel that inspired the film is a great big doorstop of a book, and Villeneuve’s film ends at the halfway point, with Chalamet’s Paul Atreides seeking safety in the harsh desert of Arrakis, where he has befriended the native Fremen, but has yet to exact his revenge on the powerful royals who betrayed his family and murdered his father.

It’s also likely that “Dune: Part II” filmmakers will demand and receive an industry-standard theatrical window, in which it would play exclusively in theaters for at least 45 days, as a requirement for any distribution pact. When the studio first announced its hybrid HBO Max plan, Villeneuve was among the most vocally against the decision. “Streaming can produce great content, but not movies of ‘Dune’s’ scope and scale. Warner Bros.’ decision means ‘Dune’ won’t have the chance to perform financially in order to be viable and piracy will ultimately triumph,” the filmmaker behind “Arrival” and “Blade Runner 2049” wrote in Variety at the time. “Warner Bros. might just have killed the ‘Dune’ franchise.” Villeneuve eventually supported the film’s unconventional rollout, and Warner Bros. through its promotional efforts made a point to heavily emphasize the benefit of big screen experience. In a sign of audience’s desire to watch “Dune” in cinemas, premium formats like Imax and Dolby screens accounted for 50% of overall domestic ticket sales.

Legendary, which forged a distribution deal with Warner Bros. in 2018, was similarly disgruntled by the HBO Max decision and threatened to take legal action at the time. The two companies have since hashed out frustrations and settled on a release strategy that satisfied both parties, one that involved paying Legendary the amount it would have received had the movie shattered box office records. Villeneuve and the film’s stars also received millions in back-end compensation. That arrangement softened the blow for talent that was initially dismayed by the HBO Max move, but for the filmmakers and stars whose movies went on to bomb or disappoint at the box office, such as “In the Heights” from Lin-Manuel Miranda and Jon M. Chu or “Cry Macho” from Clint Eastwood, that deal has aged well.

“Dune’s” box office performance, however, has been much more impressive (at least, by COVID-19 standards), as has the ticket sales for “Godzilla v. Kong,” another Legendary production that debuted in theaters and on HBO Max. Legendary financed 80% of “Dune,” with Warner Bros. covering the remaining 20%. It cost $165 million to produce, not including the millions more spent on marketing the movie as a major cinematic spectacle, so it carried a sizable investment of time and capital. The sequel would likely be granted a similar production budget.

Should “Dune: Part II” get the go-ahead sometime soon, it’s hazy when cameras could roll. The first film’s star-studded cast, for one, is already booked and busy, with Chalamet in the middle of shooting “Wonka,” a musical about the famed chocolatier and Ferguson probably still filming one of the next “Mission: Impossible” films. But the allure of the spice and the siren call of Arrakis, the desert planet where “Dune’s” action unfolds, means that obstacles as formidable as packed production schedules can be conquered.