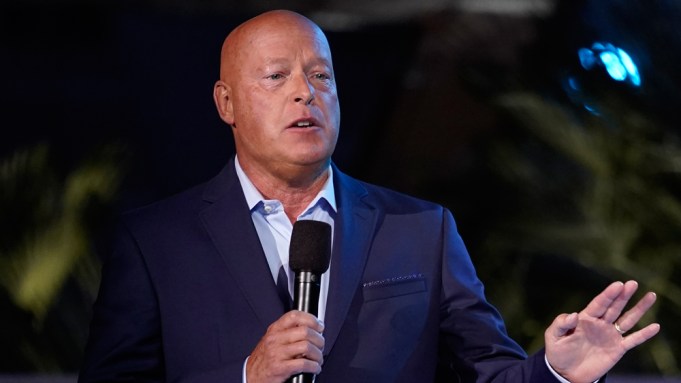 Even when COVID-19 finally, happily and at long last becomes a thing of the past, the distribution shifts it helped usher in across the movie business may be here to stay, Walt Disney Company CEO Bob Chapek said on Wednesday.

“We know that we’re in a time of flux,” Chapek told analysts on a conference call shortly after the company reported its quarterly results. “COVID will be in the rear-view mirror, God willing, [in 2022], but changing consumer behavior is a long-term change that is not going away.”

With that in mind, Disney is “sticking with our plan of flexibility” when it comes to the way it releases movies in theaters. During the worst of COVID-19, Disney sent films like “Artemis Fowl” and “Soul” straight to Disney Plus. When it began to lift and vaccines became more available, Disney released other movies such as “Black Widow” and “Jungle Cruise” on the streaming service on the same day they debuted in cinemas. More recently, pics like “Shang-Chi” and “Eternals” had 45-day exclusive theatrical runs, essentially half the time major movies would play in pre-pandemic times. Disney’s movies on schedule through 2021 will play only on the big screen for a period of time before moving to digital platforms. However, the company has not solidified plans for 2022 and beyond.

“We’re doing that so we can get our films back quicker to Disney Plus,” Chapek said.

He added that the company was closely monitoring how its films, particularly those pegged at young audiences, were performing in theaters. It will continue to gather data with “Encanto,” a musical fantasy with songs by Lin-Manuel Miranda that’s coming to theaters on Nov. 24, and Steven Spielberg’s “West Side Story” adaptation, which is hitting the big screen on Dec. 10.

“What we’re seeing is some recovery of the theatrical exhibition marketplace,” he said. “We’re watching very carefully how the different components of the demographic of that market comes back. We’re watching very carefully our family films to make sure that market comes back to exhibition. … We’re still unsure about how the marketplace is going to react when family films come back with a theatrical first exclusive window. “

“We’ll have a fairly short window” for those films, the Disney chief pledged.

Chapek noted that many of the company’s biggest franchises, from Marvel to “Star Wars,” began their lives as cinema events. But he also suggested that Disney was going to remain attuned to consumer behavior, even if it came at the expense of that platform.

“We’re going to do what’s best for our shareholders,” Chapek said.