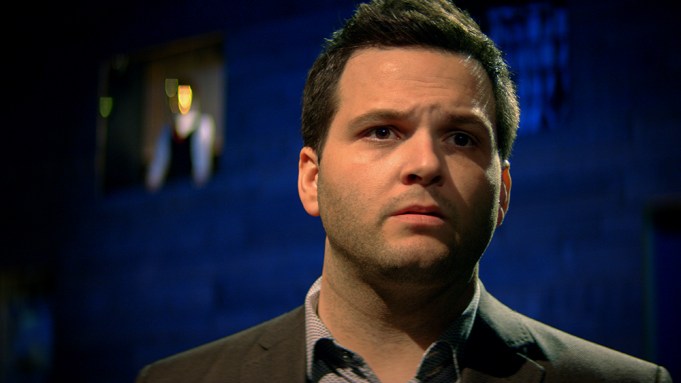 Derek DelGaudio aims to subvert expectations in his one-man show “In & Of Itself.”

He’s an illusionist, after all.

Yet in an exclusive first trailer of the live recording of his acclaimed stage show, which debuts on Hulu this month, even the audience appears unprepared for the magic that unfolds before their very eyes.

“You think this is a performance,” DelGaudio narrates in the video. “You see a man in a theater… there’s an audience. It’s difficult to see past what this looks like.”

He offers, “You can see it for what it is — or you can imagine what it could be.”

“In & Of Itself” ran Off Broadway for over a year before getting the movie treatment. Frank Oz directed the filmed version, which was recorded live in New York City. Oz previously staged the show during its Off-Broadway run and at the Geffen Playhouse in Los Angeles. “In & Of Itself” has been met with critical praise and commercial success, having grossed more than $7 million at the theater box office.

“I come here day after day after day and attempt to defy some odds,” DelGaudio tells the crowd. “I don’t expect you to believe anything you’re seeing. Only a lucky few get to know how this story ends.”

Oz, who has directed movies including “Dirty Rotten Scoundrels,” and “Death at a Funeral” and voiced characters on “Star Wars,” “Muppets” and “Sesame Street,” calls “In & Of Itself” a film he “can’t explain.”

“When Derek first came to me, I told him I had no interest in directing a magic show. Turns out, he didn’t either,” Oz said. “While he is one of the finest sleight-of-hand artists in the world, he is not actually a magician. He’s something else entirely. We both wanted to break the form and have Derek tell his true story in a compelling new way. When you see it, you’ll understand why I’m not able to describe it.”

“Derek DelGaudio’s In & Of Itself” will debut on Hulu on Jan. 22. See the official poster below: