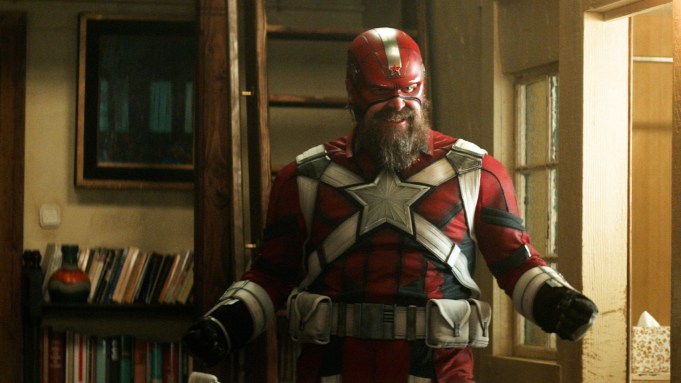 SPOILER WARNING: Do not read if you haven’t seen “Black Widow,” now in theaters and on Disney Plus.

“Black Widow” is full of layered surprises and heart, from Florence Pugh’s huge little-sister energy to Rachel Weisz’s stunning pig mind control. But truly the next breakout star in the Marvel Cinematic Universe is David Harbour as Alexei Shostakov, a.k.a. the Red Guardian.

In Alexei’s first few moments on screen, he flips a car, rides a plane as it takes off and forever betrays his fake daughters, little Natasha Romanoff (Scarlett Johansson) and Yelena Belova (Pugh). And that’s not even the truly insane part of this character’s arc. Decades later, he tops himself again by appearing as a washed-up super soldier, stuck in a prison rotting away with nothing but his fading tattoos to show for his years of of dedication to the cause. One would assume this neglect would dampen his spirit — not a chance. Harbour (with his majestic beard) fills the screen with an ego larger than Thanos. Fueled with the confidence of a man who never left his glory days, Harbour’s vigor and determination make it nearly impossible not to cheer on this flawed, flailing failure of a father.

Variety discussed the intricacies of playing Red Guardian with Harbour and whether or not his character will return.

Marvel is known for their great suiting-up scenes. Your version of this is quite different from what we’ve seen before. What did you and [director] Cate Shortland envision for this big moment?

In the script, it’s very funny. I think it’s an homage to “The Incredibles” as well — this guy, clearly past his prime. I don’t think it’s in the final cut, but we took about five hours [to shoot that scene]. It was no joke with different angles…[Shortland] shot a ton of stuff around my character, around Rachel’s character, about our connection… none of that stuff’s going to be in the movie. But I will say for that particular scene, there were great moments and we really sculpted a thing.

As we were shooting it, I went over to the mirror at one point — there’s even stuff in the trailer that I don’t think made it in the [final] cut — where I’m just flexing and looking at myself and there is this ego. But there’s also him seeing himself age and confronting that as well. And then putting the blinders on and being unable to confront it and actually unable to see it. There’s a whole arc. When any of us look in the mirror, it’s such a personal thing to see yourself to know what you have looked like, and to actually genuinely look at yourself then. And so in that way, I love that about him. I love the fact that Cate was unafraid of playing with those ideas. I like real bodies, I like bodies that can’t get into jeans. Some people see it and they laugh, but to me, I like people like that because I feel like they have appetite and they have life and like to live. It’s funny, but I also like that guy.

Can you run us through some of your favorite Alexei tattoos?

Oh god yes. My favorites were, he has “Karl Marx” written on his knuckles, like “love” and “hate,” which I thought was just hilarious. I love that. That was a last-minute addition. He’s got a picture of [Vladimir] Lenin’s head on his abdomen. There’s a very intricate Russian gang tattoo that I felt looked a little bit too Nazi eagle. I didn’t want people to get distracted by that, so we put these little parapets on it that made it our own. There’s all these Russian words that were very personal to me. Then on his neck is a special custom tattoo we had built that is Rachel Weisz’s face in a bob haircut when she was younger. It says “Melina” underneath that. That was probably my favorite one because I love Rachel Weisz.

How did you go about discovering who Alexei was and finding this character?

From the beginning of the movie, he definitely makes a choice that is hard for an audience to overcome. I think you have to gain a lot of ground later on in the movie to get people to go with him because he does something that’s quite dramatic.

I started with this idea that he really was a Soviet in the sense that he grew up under a Soviet Russia as opposed to the Russia of today. And then in that sense, he did really believe in a cause. I don’t know that Americans have the same belief in that cause. We have these ideologies of freedom and things like that, but there’s something about the Communist ideology that was so strong and so powerful. And so I think that the sacrifices that he made were for that. So I dug really into that aspect of it, the philosophy of that, what it would’ve meant to be a super soldier in that world. It became about these colors of remorse, grief and having made the wrong decisions. Seeing these daughters that you thought that you were doing the right thing by sort of surpasses you and the jealousy of that. All these very human things. My process always kind of starts with the script and then gets very personal as I go along.

In the film, Alexei is excited that his “daughter” Natasha is an Avenger, but this flies in the face of many of his beliefs. Do you think Alexei is truly proud that she defected from the overall mission and plan?

Well he does both. It’s the same thing that I think anybody does with their daughter. When it’s to his advantage he uses that as a thing. At one point he says, “You capitalist.” or something about. And then, when he wants to build her up, it’s “You’re such a big shot.” I think it’s just more a product of them, it’s father/daughter. He just knows her and loves her. When she annoys him, he lets loose.

What attracts him about that Avengers thing is not so much that it’s Westernized, but the fact that she’s a superstar in a world that he wanted to be a superstar in, too. It’s not in line with the Communist ideology, but he was the great hope of Russia in terms of this superstar, and he never really made it. She sort of made it. She’s an Avenger; they know her, she’s the one. I think he is both jealous, but ultimately very proud of her superstar status and how much she achieved with where he put her in the Red Room and how messed up that situation was, how much she got out of her life.

You slipped back into your character’s accent there, what’s the hardest part of mastering a Russian accent?

Oh man, like everything. Russian accents are very hard. I do find that when I work on accents it’s hard to be technical with them…If you’re not careful, sometimes it can become an Italian mobster. I would find myself slipping into Tony Soprano, and that was bad. Accents are tough, but it’s fun because you have a little bit of a buffer in the sense of, it’s not a full-on documentary here. It’s a version of Russia that is populated with superheroes and international people. I do the best I can, but also allow the character to be the character and more than just the accent.

Will we be seeing more of the Red Guardian in the Marvel Cinematic Universe?

They don’t let you say these things! I would love for there to be more Red Guardian. And I would love for you guys to love for there to be more Red Guardian, because that always helps the cause. I love the character. There’s so many things you could do with him, right? There’s this gap of 25 years where we don’t know who he was, his version of events as opposed to the actual version of events, and what happens to him after this movie. And why isn’t he fighting Thanos? Where is he in that time? What happens then? When [Natasha] dies, what happens then? I mean, it’s very interesting to me and I hope that there is interest on other levels and maybe we’ll see some more.