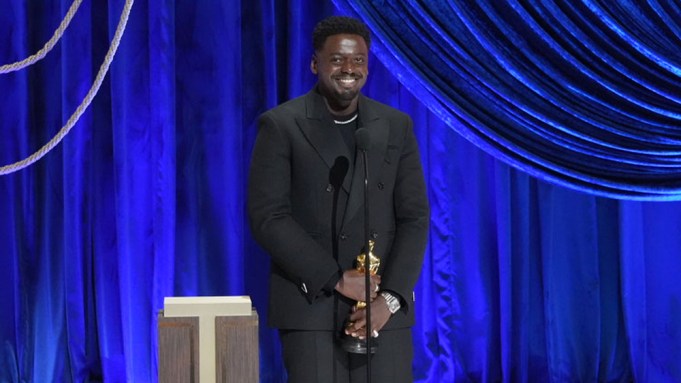 Daniel Kaluuya won the Academy Award for best supporting actor for “Judas and the Black Messiah.”

For his stirring portrayal of Black Panther party chairman Fred Hampton in the Shaka King film, Kaluuya has been decorated heavily this awards season. This marks his first Oscar win and second nomination, the previous in 2018 in the best actor category for Jordan Peele’s “Get Out.”

During his speech, after he thanked the cast, crew and producers behind “Judas and the Black Messiah,” Kaluuya paid tribute to Hampton and the entire Black Panther party.

“What a man,” Kaluuya said of Hampton on stage. “What a man. How blessed we are that we lived in a lifetime where he existed. You know what I mean? Thank you for your light. He was on this earth for 21 years, and he found a way to feed kids breakfast. Educate kids, give free medical care, against all the odds. He showed me, he taught me, him, Huey P. Newton, Bobby Seale, the Black Panther party, they showed me how to love myself, and with that love, they overflowed it to the Black community and other communities.”

“And they showed us the power of unity,” he went on. “When they play divide and conquer, we say unite and ascend.”

Hampton was a 21-year-old revolutionary who was killed in a multi-agency sting operation in 1969. Kaluuya stars in the film opposite LaKeith Stanfield, portraying the FBI informant who betrayed Hampton, and Dominique Fishback. After breaking out in Peele’s horror sensation, Kaluuya has gone on it star in Disney’s blockbuster “Black Panther,” “Queen and Slim” and an underrated turn in Steve McQueen’s “Widows.”

In January, Kaluuya spoke to Variety about the period film’s timeliness given the past year of national civil unrest.

“There are a lot of people that don’t know this man existed. A lot of people don’t know the words that he says in this film, that those words exist, especially in post-production. We shot this film and everything happened this year with George Floyd and the Black Lives Matter movement. This film articulates the feeling that’s been happening this year,” he said.