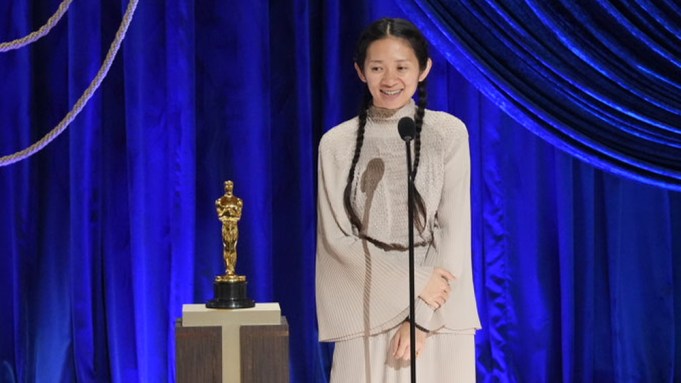 For the first time in more than a decade — and only the second time in history — a woman has won the Oscar for best director.

Chloé Zhao on Sunday night took home the Academy Award for best director for “Nomadland,” a sweeping drama about a widow in her 60s (Frances McDormand) who travels the Western United States in a van after losing her job in the Great Recession. The Searchlight film — which Zhao wrote, edited and produced, in addition to directing — received six nominations in total, including best picture and actress for McDormand.

Zhao’s victory makes her the first Asian woman and first woman of color to win the top directing prize at the Oscars. Accepting the award onstage, Zhao, donning braids and white sneakers, thanked her fellow nominees and the entire cast and crew that helped bring “Nomadland” to life.

“I have been thinking a lot lately of how I keep going when things get hard,” she said. “And I think it goes back to something I learned when I was a kid. When I was growing up in China, my dad and I used to play this game. We would memorize classic Chinese poems and texts, and we would recite it together and try to finish each other’s sentences.”

Zhao says she has always been particularly inspired by the phrase “人之初，性本善,” which comes from the foundational Chinese text “The Three Character Classic” and translates to: “People, at birth, are inherently good.”

“Those six letters had such a great impact on me when I was a kid,” Zhao continued. “And I still truly believe them today, even though sometimes it may seem like the opposite is true. But I have always found goodness in the people I met — everywhere I went in the world.”

Zhao joins Kathryn Bigelow, the filmmaker behind 2009’s war thriller “The Hurt Locker,” as the only women to have been awarded the best director statue in 93 years. Prior to the 2021 ceremony, only five women had even been nominated: Lina Wertmüller, Jane Campion, Sofia Coppola and Greta Gerwig.

Preceding the 2021 ceremony, the voting body behind the Oscars had made history by nominating more than one woman (the other being Emerald Fennell for “Promising Young Woman”) in the directing category in the same year.

Though Zhao had formidable competition — Fennell, Thomas Vinterberg (“Another Round”), David Fincher (“Mank”) and Lee Isaac Chung (“Minari”) — the best director race was hers to lose. The prize caps off a record awards season for Zhao, whose “Nomadland” has been celebrated every stop of the way since it first premiered at the 2020 Venice Film Festival. On the extended circuit, Zhao was named best director at the Golden Globes, BAFTA Film Awards, Directors Guild Awards and Critics Choice Awards. Those plaudits have made her the most decorated filmmaker in a single awards season.

“Nomadland” is the 39-year-old Zhao’s third feature film, following 2015’s drama “Songs My Brothers Taught Me” and 2017’s Western “The Rider.” Her next movie is Marvel’s superhero epic “Eternals,” which is due in theaters this November.