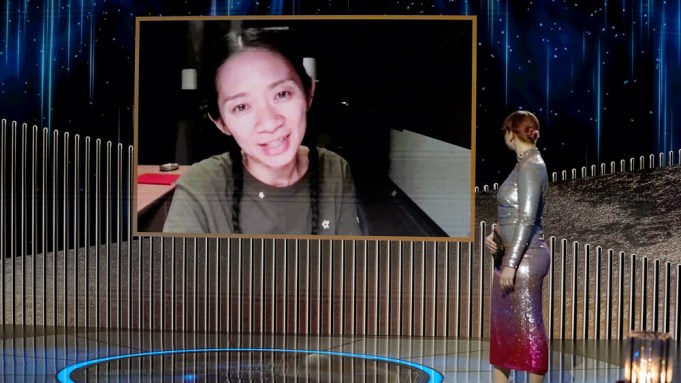 After Chloe Zhao became the first Asian woman to ever win the Golden Globe for best director, Chinese social media was abuzz about everything related to Zhao — except the film itself.

Although most Chinese viewers have yet to see the film, many cheered the Golden Globe win. Scores of posts praised Zhao’s heartfelt acceptance speech about compassion and described her as an inspiration to women in the arts. The hashtag “Chloe Zhao Wins Golden Globe for Best Director” has been viewed more than 280 million times on Weibo as of Tuesday morning local time.

Many lamented that Zhao likely could never make such a powerful film about China given the mainland’s current censorship environment. “You don’t actually think realistic stories about China could pass censorship, do you?” one commenter chided another. Another rejoiced: “So it turns out Chinese directors outside the control of [the top censorship body] are still very good!”

In the wake of her win, Zhao recorded a Chinese-language video message to viewers to promote the film’s upcoming April 23 release in mainland China. “This film was made possible by the passion, hard work and even the life stories of many people,” she said. “I hope that through their stories, you’ll go looking for a life that is your own, and become the writer of your own life’s story.”

For years, Zhao has been better known in China as the step-daughter of Song Dandan, a veteran actor beloved for her comedy roles and TV appearances. Zhao’s film “The Rider” had a one-off screening at the 2017 Pingyao International Film Festival, but otherwise was never released in China.

Song’s message of congratulations to her step-daughter was also a widespread topic of discussion Monday. “Today, on someone else’s [the U.S.’s] home turf and competing against their strong suit, you were able to receive this kind of recognition… You are our family’s legend, and I believe your story will inspire countless Chinese children,” Song wrote, lauding her for choosing a path they “never felt had good prospects but had come to respect.”

But things got complicated after social media users unearthed two previous interviews given by Zhao to foreign news outlets, both of which appear to have now deleted sections.

In the first, Zhao told the Australian entertainment site news.com.au that “the U.S. is now my country” — an indication, many netizens surmised, that she no longer holds a Chinese passport. The comments appeared in the original report published Dec. 25, but had been removed by Feb. 16, according to archived versions of the site – roughly a week before the news that “Nomadland” had passed censorship to receive a China theatrical outing. The outlet did not reply to Variety’s request for comment by time of publication.

The second interview appeared in New York-based Filmmaker Magazine in 2013. Explaining why she chose to make a film about a Native American teen on a North Dakota reservation, Zhao said: “It goes back to when I was a teenager in China, being in a place where there are lies everywhere.

“You felt like you were never going to be able to get out. A lot of info I received when I was younger was not true, and I became very rebellious toward my family and my background.”

The comments were removed by Feb. 15, archives show, although they are still referenced by at least one other outlet elsewhere online. Filmmaker Magazine has not yet responded to Variety’s request for comment.

Screenshots of these two interviews have been translated and widely disseminated on the Chinese web, sparking controversy among nationalists. Questions over Zhao’s citizenship have also sparked debate over whether it is appropriate to claim Zhao’s victory as China’s — a common move by state-backed outlets to drum up nationalism.

“Congratulate her on the prize, but just don’t promote her in China by sticking the ‘Chinese person’ label on her — it’s revolting,” exclaimed a Weibo poster.

On the other hand, those especially taken with official rhetoric about the importance of ethnicity and nationality also felt betrayed. For them, the historic significance of having an Asian win the prize meant little if it wasn’t attributable specifically to China.

“The media should report whether she’s a Chinese or overseas director carefully,” one admonished, so that people could figure out just how proud they should feel.

“Chinese audiences nowadays are becoming more and more supportive of Chinese films. People have different attitudes towards films directed by Chinese directors compared to films with foreign directors — so you should avoid promoting things in the wrong way,” the poster said.

Even though artists, films and companies have been banned from the enormous China market due to past remarks deemed to have slandered the country, many online commenters were still left “speechless” by the scale of the nationalist backlash. “I thought Chloe Zhao would be praised as an outstanding female artist, but unexpectedly there are so many people grasping at the issue of nationality,” one poster wrote. “How does nationality have anything to do with whether someone has made contributions to their field or not?”

The heated debates about whether to support Zhao reveals the country’s deep cultural anxieties at a time when its officials trumpet the need for “cultural self-confidence.” It also highlights the very different ways that China and the U.S. consider issues of privilege, race, and the role that artists should play in society.

Online critics pointed out her privilege of having a movie star stepmother and a father who headed a number of important Chinese state-owned enterprises. One of his firms “laid off workers en masse,” yet “the boss’ daughter gets her gold overseas, eating up god knows whose money made through sweat and tears, then turns around and says there are ‘lies everywhere’,” one wrote.

Despite the controversy swirling online, “Nomadland” faces an uphill battle to attract viewers in China. Film critic Xiao Fuqiu told the Global Times that he was “not very optimistic” about its box office potential, given that “it runs against the tastes of mainstream audiences” due to its slower pace, lack of exposition, and understated emotional timbre. Only a thousand viewers so far have clicked its “want to watch” notification on the Maoyan data tracking app — a key index used by cinemas to gauge interest in a title, with clicks of more than 100,000 typically indicating strong commercial potential.

“To put it bluntly, Hollywood is dead trying to use an overseas Chinese director as a selling point,” one Weibo user assessed. “The mainland market doesn’t even come out for [Taiwanese-American] Ang Lee anymore, and you’re still trying to push Chloe Zhao, who blackens history, to get a piece of the pie? Fat chance. Look at the mainland box office of ‘Crazy Rich Asians’ and ‘Mulan’ and wake up.”

A widely re-posted Douban commentary gave some advice to the film’s marketing team by referencing Communist Party propaganda terms and citing the Qing dynasty thinker Wei Yuan, who grappled with questions of how China should handle the threat posed by Western powers.

“All the China distributor has to do is position the film as a born-and-bred Beijing girl’s attempt to ‘learn from foreigners in order to gain command of them,’ and to, without ever forgetting [the CCP’s] original aspirations, shoot a film that deliberately exposes the troubles of America’s lower classes,” he joked. “Once government bureaus across the country hear it put that way, they’ll send their entire work units off to the cinemas en masse.”