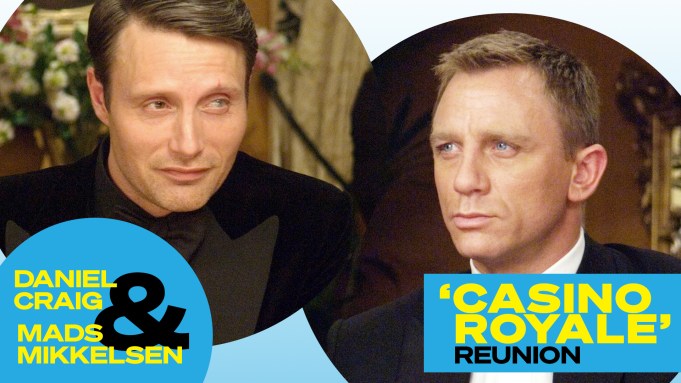 Daniel Craig and Mads Mikkelsen first met casting the 2006 film “Casino Royale,” which was Craig’s first turn at James Bond. Mikkelsen recalls their initial conversation at costume fitting and what he thought would be an audition. It was a crazy day, one Craig compared to “herding cats.” The two were taking a break together when director Martin Campbell came up and said he didn’t need to see Mikkelsen, he had the part.

The actors sat down (virtually) with one another for the inaugural episode of “Dream Teams,” Variety’s new series that pairs collaborators who caught lighting in a bottle. Having recently seen Mikkelsen’s turn in the film “Another Round,” Craig was eager to discuss that performance but the two also reminisced about playing poker, that infamous torture scene and playing drunk.

Since facing off as Bond and Le Chiffre, a banker who works with terrorists, Craig and Mikkelsen have gone on to impressive acting careers. In “Another Round,” Mikkelsen plays Martin, a teacher caught in a rut who makes a pact with his friends to keep his Blood Alcohol Content (BAC) above 0.05 during the day. It’s a performance that has earned him raves from all over the world, including from his former co-star – after seeing the film, Craig sent Mikkelsen an email praising his work.

“I could tell it was very genuine and I was really, really pleased to hear from you and hear that you that you enjoyed the film,” said Mikkelsen. Replied Craig, “I wish I could have written to all of the cast, everybody was just amazing.” Craig also pointed out that the idea posited in the film – “we’re all not quite drunk enough” – feels particularly apt in this time of COVID.

Craig asked about reuniting with Thomas Vinterberg, who Mikkelsen had previously worked with on “The Hunt,” and Mikklesen noted that the idea was originally pitched to him seven years ago, right after they made that film. “As a starting point, it was it was a tribute to alcohol, how it can win wars, how it can make people be creative. How it can make people pick up the phone and call that special someone that they didn’t dare to do without two glasses,” said Mikkelsen. Vinterberg then came across this theory from psychiatrist Finn Skårderud, positing that humans BAC level is naturally too low, and it should be at 0.05 to keep you relaxed. “This theory came his way, and all of a sudden, he had an idea. And then he started building on it.” But ultimately, Mikkelsen said, it’s a story about life, like all of Vinterberg’s films.

Craig praised Mikkelsen’s “beautiful work” particularly at the beginning of the film, where we see how trapped and isolated Martin seems to feel. “There’s so much going on and there’s nothing going on, it’s like you’re kind of dead but you’re not dead and it’s like a deer caught in the headlights. You’re watching your life slowly pass by, slowly happen in front of you. I felt like I could see everything going on with you.”

Mikkelsen also discussed the challenges of portraying his character’s breakdown near the start of the film. “Which is a bold move to do in the film where you don’t know the character yet,” he noted. “You will normally you know place it at the end.” But Mikkelsen added that as an actor, “What scares us intrigues us as well, and that we’re drawn to it somehow. So I find myself always saying yes to something that is an extremely radical, small-budget film, I end up in minus 40 degrees somewhere all by myself, and I’m like, ‘Why? I’m 55, what’s happening?’”

While the two share an obvious rapport, they also discussed what it was like playing adversaries in “Casino Royale,” particularly the infamous and intense torture scene where Le Chiffre ties Bond to a chair, removes the seating, and tortures him with a knotted rope. Mikkelsen recalled how the two discussed the scene with Campbell and floated some crazy ideas around. “We came from rock and roll films so we were just diving into that scene and we came up with so many cool ideas,” Mikkelsen noted. “At a certain point he said, ‘Guys, guys, come back it’s a Bond film.’ It was always a scene that was on the edge; it was on the edge for a Bond film.”

Added Mikkelsen, “It was a wonderful day for me—you, maybe not so much! Eight hours of you screaming your lungs out.” To which Craig responded that it was a time where he was nervous about everything. “I can’t imagine the person I was that you saw back then, because I was so uptight – not uptight – you know, jangling nerves about everything. Because everything was just so important. And I remember that day, knowing that the scene was good, knowing that it was like kind of on the edge and you came in and you just smacked it out of the park. And then it was joyful, because it was just an acting scene.”

Mikkelsen said that he couldn’t tell Craig was nervous at all, and added, “There was not one second that was in doubt that you would be the best Bond ever since we did the first scene together.”