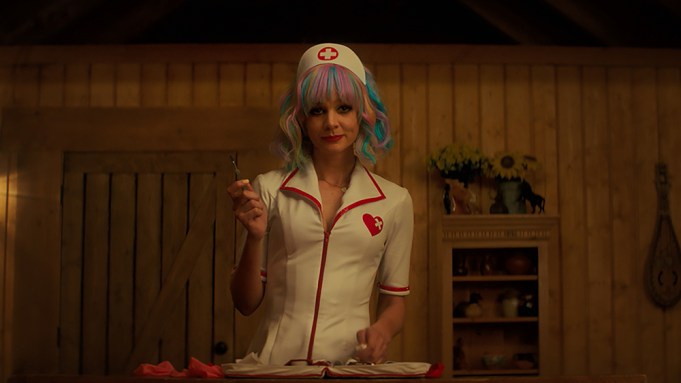 In a profile in the New York Times in December, Carey Mulligan was asked about the initial reactions to her movie “Promising Young Woman” during its premiere at the Sundance Film Festival in January of last year. After Mulligan “winced” at the question, she answered.

“I read the Variety review, because I’m a weak person,” she told the Times. She characterized the review as saying she wasn’t “hot enough to pull off this kind of ruse,” but said she wasn’t mentioning it because her feelings were hurt: “It wasn’t some sort of ego-wounding thing — like, I fully can see that Margot Robbie is a goddess.” (The review suggested that perhaps Robbie, a producer of “Promising Young Woman,” might have been a better choice for the role of Cassie.)

Since the Emerald Fennell film specifically skewers womanhood-as performance, writing critically about Mulligan’s appearance in “Promising Young Woman” struck her as a particularly absurd movie to be so tone deaf about. “It drove me so crazy,” Mulligan said to the Times. “I was like, ‘Really? For this film, you’re going to write something that is so transparent? Now? In 2020?’ I just couldn’t believe it.'”

Though the review, written by freelance critic Dennis Harvey, was mostly positive, the Variety newsroom agreed with Mulligan. Variety ended up adding an editor’s note at the top of the review, that reads: “Variety sincerely apologizes to Carey Mulligan and regrets the insensitive language and insinuation in our review of ‘Promising Young Woman’ that minimized her daring performance.”

During Mulligan’s conversation with Zendaya for Variety’s Actors on Actors series, presented by Amazon Studios, Zendaya asked her about calling Variety out, and our magazine’s subsequent apology. “Beautifully said,” Zendaya said after Mulligan finished.

We agree with that, also. Here’s Mulligan’s response in its entirety:

“Which for me felt disappointing, because obviously the film is sort of tackling issues around our perceptions and our preconceived ideas about people. In the broadest sense, I think there’s an element to where we have idealized women on screen for so long that I think we start to lose sight of what women really look like. When I worked with Steve McQueen on ‘Shame,’ he said, ‘Really, what we’re all doing is holding up a mirror. That’s what we do as storytellers.’

“And I think if women continually look on screen and don’t see themselves, that’s not helpful for women or for anyone, really — that we’re not going to tell authentic stories. So I think in criticizing or sort of bemoaning a lack of attractiveness on my part in a character, it wasn’t a personal slight, it wasn’t something that I felt. It didn’t wound my ego, but it made me concerned that in such a big publication, an actress’ appearance could be criticized and it could be that, you know, that could be accepted as completely reasonable criticism.

“I think it’s important to call out those things, because they seem small and they seem insignificant. People around me at the time said, Oh, you know, get over it. Whatever. It’s great — it’s a great review. Or whatever: People love the film.

“But it stuck with me, because I think it’s these kind of every day moments that add up — that mean that we start to edit the way that women appear on screen, and we want them to look a certain way. We want to airbrush them, and we want to make them look perfect. Or we want to edit the way that they work, the way they move, and the way that they think and behave. And I think we need to see real women portrayed on screen and in all of their complexity. So I felt that it was one small thing to point out that could be helpful.

“I was really, I guess, surprised, only because I felt like I didn’t know what the reaction would be to my saying that. I certainly didn’t want to — sort of nerve-racking to rock the boat with a big publication. But at the same time, it feels like, you know, you’ve got to stand up for these things. Otherwise, it continues and then you’re essentially part of it.

“So I was really, really surprised and thrilled, and happy to have received an apology. I kind of found it moving, in a way, to have drawn a line under that in a good way, and know that that had an impact in a way. So it was positive.”