Continue to Variety SKIP AD
You will be redirected back to your article in seconds
Aug 20, 2021 11:30am PT 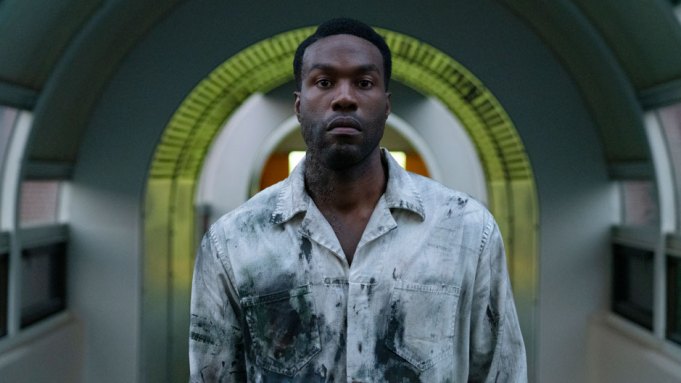 In advance of the Aug. 27 release for Nia DaCosta’s “Candyman,” Universal Pictures and Jordan Peele’s Monkeypaw Prods. have launched a social impact initiative connected to the film, with the hashtag #TellEveryone.

Directed by DaCosta, the new movie stars Yahya Abdul-Mateen II, Teyonah Parris and Colman Domingo and paints a new picture of the Candyman urban legend with a focus on the social justice elements of his story.

The campaign kicked off with star-studded in-person and virtual influencer screenings hosted by Lupita Nyong’o (who starred in “Us”) and Savannah and LeBron James hosting additional screenings in Atlanta and L.A. respectively. Monkeypaw also hosted screenings in New York (with “Us” actor Shahidi Wright Joseph) and L.A. (with “Get Out’s” Lil Rel Howery; Kendrick Sampson; “Us” actors Evan Alex and Cali and Noelle Sheldon; and original and returning “Candyman” star Vanessa Williams.) But those events were just the beginning of the conversation the movie intends to spark.

On Friday, the companies unveiled a social impact website, which serves as a singular hub for the conversation to live through the designated hashtags #CANDYMAN and #TELLEVERYONE.

While the 1992 “Candyman” movie takes place in the world of academia, the new film focused on the modern art world. Anthony McCoy (Abdul-Mateen II) is a talented young artist who revives the Candyman legend through his artwork, and his partner Brianna Cartwright (Parris) is a gallery director. So, Universal and Monkeypaw worked to feature Black artists with a fan art showcase via Black Artist Space. The companies also working with HBCUBuzz selected six talented student artists from HBCUs (Historically Black Colleges & Universities) to create an original art piece or mural inspired by “Candyman” to be displayed on campuses across the country the week of Aug. 23.

The site also features a candid conversation between Domingo and a group of leading Black academics, activists and thought leaders about the social impact of the film, titled “The Impact of Black Horror.”

The actor is joined for the round-table by experts Dr. Wendy Ashley (Professor and the Associate Chair of the California State University at Northridge’s Masters of Social Work program), Lorenzo Lewis (founder of The Confess Project), Tananarive Due (UCLA professor of Black horror and Afrofuturism) and Yolo Akili Robinson (founder and executive director of the Black Emotional and Mental Health Collective).

During the discussion, Due explains how the new film takes a more holistic look at the trauma at the center of the Candyman tale.

“Really what was fueling a lot of the fear around him, was fear of Black masculinity, Black men, fear of the urban jungle,” Due said. “I mean, Cabrini-Green itself is a ‘monster,’ really some of the worst stereotypes around Blackness. So it was very, very important for Nia DaCosta and Monkeypaw to come and reframe a story about Black trauma through a Black lens, not through the white lens.”

Robinson added: “The monster is violence against Black folks. And so we see how the resonance of that harm contributes to the creation of Candyman, right. The real threat here is this kind of unaddressed, ongoing systemic and structural violence from white institutions.”

As the movie’s release date approaches, the website will be updated with more content, including the official companion guide to “Candyman,” an electronic document that will dive deeper into the historical context and social impact themes from the film. Monkeypaw Productions and Universal Pictures collaborated with Langston League on the new materials, with special insight from Due and fellow educator Professor John Jennings.

In an interview with Variety, Abdul-Mateen explained how having a predominantly Black creative team behind the movie created a different perspective on the “Candyman” story.

“[Candyman] was portrayed as a tragic figure, but we sort of remember him as a villain, you know, history remembers his bad deeds,” Abdul-Mateen said. “This version of Candyman gives us a chance to take back his story and to present a character who was turned into a monster. We present a character who has a soul and someone who we can be empathetic towards. It’s really, you know, a form of taking our narrative, taking the story of our history and our trauma and telling it back the way that we desire to tell it.”

Domingo also shared how the call to say Candyman’s name five times has different resonance given the social climate in which the film is being released and the way it echoes calls to remember real-life victims of racial injustice.

“We shot this right up until everything started to get locked down in March of 2020, before our summer of racial reckoning,” he recalled. “So we were already starting to shout quietly, ‘Say her name. Say his name,’ and then it reverberated even more so in the streets.”

Now, Domingo explained, the film has more runway to unpack the larger cultural questions that it poses about art, commerce, criticism, racial reckoning, Black trauma and pain and more.

“It’s under the whole tentpole of horror, which is a great connective tissue, actually — a way for us to examine this stuff together — Black, white, and other,” he added. “It’s just not the things that go bump in the night or someone hiding in the closet. But the question of who is the monster? How do we create the monster? What about our culture creates this? I think that we can unpack a little bit more than we were used to with this horror film.”