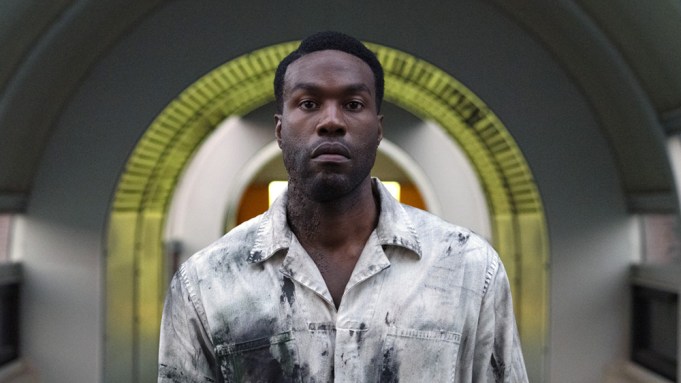 Nearly 30 years after the vengeful spirit first haunted the big screen in 1992, the Candyman is back.

Serving as a “spiritual sequel” to the original supernatural slasher of the same name, Nia DaCosta’s “Candyman” — written by recent horror darling Jordan Peele — was met with mostly positive reviews.

Read some highlights of what critics are saying below:

But now “Candyman” has been remade, by the director Nia DaCosta (I’m pleased to report that Tony Todd is back — he looks a little bit older, and a lot more venerable in his grin of unspeakable pain), and what she has done is to make a horror movie that has its share of enthralling shocks, but one that’s rooted in a richer meditation on the social terror of the Candyman fable. The new “Candyman” references the plot of the original as a sinister fanfare of shadow puppets, as if to say, “That was mythology. This is reality.” It’s less a “slasher film” than a drama with a slasher in the middle of it.

As with Peele’s directorial efforts, there are lots of intriguing notions toyed with in this film: ideas about gentrification, systemic racism, the figurative ghosts of White America’s haunted past — along with some literal ghosts — and the idea of mirroring, which is threaded throughout “Candyman” from the intentionally backward opening credits to the very end. You could call all that the chewy nougat center of this film, which in many other ways obeys some of the least interesting conventions of the slasher genre. As an example of scary story/social critique, it’s a cut above Peele’s “Us,” but far less incisive than his Oscar-winning debut, “Get Out.”

“Candyman” lacks energy and inventiveness. Its screenplay is remarkably didactic, showing that it was intended neither for an audience of diehard horror fans nor Black people. Every intriguing plot point — the Candymen, the “Invisible Man” ethos — is squandered by pedestrian direction, facile thought, and a craven commodification of Blackness. In trying to reckon with the contradictions of the ’92 film, as well as carve out their own work, DaCosta and her collaborators have created a misfire that can’t make its tangle of politics — about gentrification, the Black body (horror), racism, white desire — feel either relevant or provocative. When Blackness is whittled down, this is the kind of poor cultural product we are sold.

Several rounds of Black Lives Matter protests and the proliferation of videos capturing Black death at police hands have crystallized Rose’s film as a fantastical folkloric horror, a palpable parable of Black reality, set on a forsaken side of town. DaCosta is the recipient of those themes, responsible for translating them into a story that fits the present racial environment. But her Candyman is a confused, overstuffed web of shallowly presented ideas, including critiques of gentrification and the white critical lens, and a request for Black liberation.

The movie prefers to tell rather than show, making for an incomplete fusion of social commentary and gothic scares. The decision to put everything out there in plain text is understandable: especially post-“Get Out,” there has been an appetite for genre films, particularly horror, that are actually saying something about society. And the topics at hand in “Candyman” are as urgent as they come. What’s missing in DaCosta’s film, though, is a more thoughtful synthesis of message and medium.

The filmmakers use fabulous paper puppets to tell aspects of the past and have a recurring motif of bees and mirrors. “Candyman” gets progressively more filthy as it unspools, going from gleaming granite countertops in elegantly lit and airy kitchens to grimy, muddy abandoned and graffiti-scarred projects. There are more than a few stunning scenes, including the camera steadily pulling away from a well-appointed apartment at night while the woman in it grapples with the Candyman, and one in a girls’ bathroom that is terrifying for the fragments that it doesn’t show.

The script is rich with social and cultural prompts, sometimes stuffed into the narrative, as when Anthony drunkenly outs an art dealer as a sexual predator. (The subject isn’t touched upon again). The main one, concerning the stain of racial torment marking generations of Black citizens, is complex enough to start the intended conversations, and to bestow hefty replay value on “Candyman.” Indeed, the film’s website offers tandem curriculum resources for educators—this story is more about asking questions than providing tidy answers. […] Where Bernard Rose spoke on white anxieties and the image of the scary Black man in 1992, DaCosta expands the conversation, relocating the horror from one man to the many structures that foment brutality upon the Black populace.

It helps that Candyman is exquisitely shot. Right from the first frame, DaCosta is always doing something interesting with the camera. There is smart visual storytelling almost everywhere you look, from the clever use of mirrors, to edgy scene transitions, to set design that starts to mirror Candyman’s look in interesting ways. The jump scares are rare but hardly needed: all this contributes to a growing feeling of dread as the film speeds towards its bold conclusion.