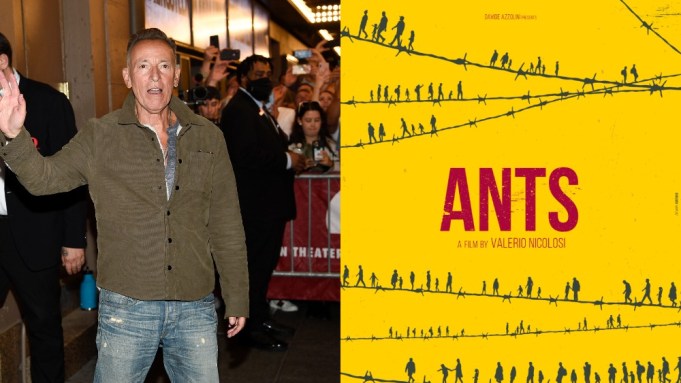 When Bruce Springsteen recorded his 1995 album “The Ghost of Tom Joad,” the Boss admitted he hadn’t read John Steinbeck’s “The Grapes of Wrath” — of which Tom Joad is the protagonist — until after the album’s release.

Looking to perhaps remedy that oversight, Springsteen has agreed to read soulfully from “The Grapes of Wrath” for an upcoming doc titled “Ants,” about the plight of migrants crossing from Africa and Asia into Europe, directed by Italian journalist and filmmaker Valerio Nicolosi.

When Italian indie film producer Davide Azzolini reached out to Springsteen through his manager Jon Landau, asking him to read from Steinbeck to help make “Ants” “more universal,” he didn’t have high hopes, he says.

Azzolini sent Landau a long trailer and the text of the quote, from Chapter 21 of “Grapes,” which begins with “The fields were fruitful, and starving men moved on the roads” that he had picked out because “it’s a perfect fit.”

“I said it would be a wonderful gift for us if [Springsteen] could read it. That it would help this project immensely.”

The reply was: “He doesn’t do these things, but let’s try.”

A few weeks went by, after which Azzolini got a hopeful reply, saying Springsteen “would tape it in his studio with his sound person.” And a few days later “we got an email with two different takes of his recordings, which we edited in,” he says.

“Ants” was shot over a long period spent on rescue vessels such as the Open Arms, run by a Spanish charity, and in the overcrowded camps on the Greek island of Lesbos as well as the Balkans.

It follows the path of individuals and entire families along the so-called “Balkan route” between Greece and the Balkans, where migrants try to enter Europe in pursuit of a better future, just like those in “The Grapes of Wrath.” This journey of hundreds of thousands of people, which usually involves getting turned back at borders, sometimes violently — only to try and enter at a different crossing point — is known as “The Game.” And it’s a game that many are forced to play.

“The doc is sort of like a behind-the-scenes of what you see on the news,” says Azzolini. “It takes you in the midst of the migrants: what they face, what they experience, what they think,” he adds, noting that migrants “are often perceived by others a bit like ants,” thus the doc’s title.

“Ants,” which is produced by Azzolini’s Naples-based Dazzle Communication, is currently being submitted to international festivals. Italy’s Fandango Sales is selling internationally.