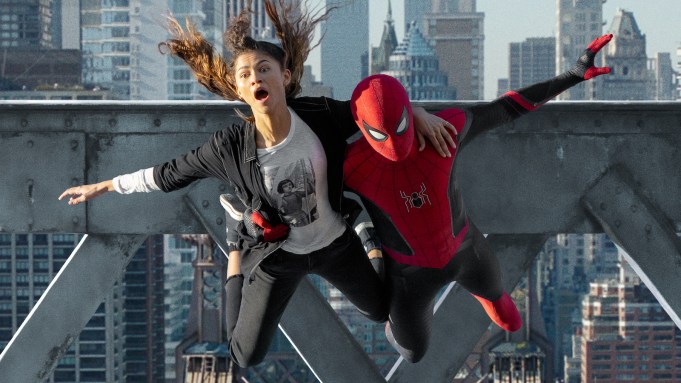 “Spider-Man: No Way Home” blew the doors off the box office, earning a massive $50 million in Thursday previews. The Sony Pictures release is on pace to pull in between $150 million to $180 million over its opening weekend, setting a new high-water mark for blockbusters during the COVID era. Even rising cases of the virus and the emergence of a new and troubling variant seem unlikely to stall Spider-Man. That could change, of course, as the weekend progresses. Omicron is currently leading to the closures of restaurants and live theater in major cities such as New York City, which might make some moviegoers skittish about hitting up cinemas.

If projections hold (and really why would they not?), “Spider-Man: No Way Home” will be the first pandemic-era movie to cross $100 million in a single weekend. Only one other film, Sony’s comic book sequel “Venom: Let There Be Carnage,” has come close to hitting that benchmark, with initial revenues at a still-impressive $90 million domestically.

The result is the third highest preview gross of all-time, tripling that of “Spider-Man: Homecoming,” the highest grossing “Spider-Man” in terms of previews at $15.4 million. “Avengers: Endgame” holds the record for preview results with $60 million, ultimately earning $357.1 million in its initial weekend. Runner-up is “Star Wars: The Force Awakens” with $57 million en route to an opening weekend gross of $248 million.

“Spider-Man: No Way Home” pulls out all the stops to climb to this lofty height. The film brings together villains from several previous Spidey outings, including ones who made hell for past web-spinners Tobey Maguire and Andrew Garfield. Tom Holland is the third actor to don Spider-Man’s spandex.

Critics liked “No Way Home,” handing it a 94% “fresh” rating on Rotten Tomatoes. In a favorable review, Variety‘s Peter Debruge wrote “convoluted as the Marvel Cinematic Universe has gotten, Holland’s latest opus spins two decades and three iterations of the Spidey brand into a satisfying meta-adventure.”

With results like these, Holland and his agents must be smiling. If Sony and Marvel want him to keep playing Peter Parker and his alter-ego, they’re going to be signing some mighty big checks.