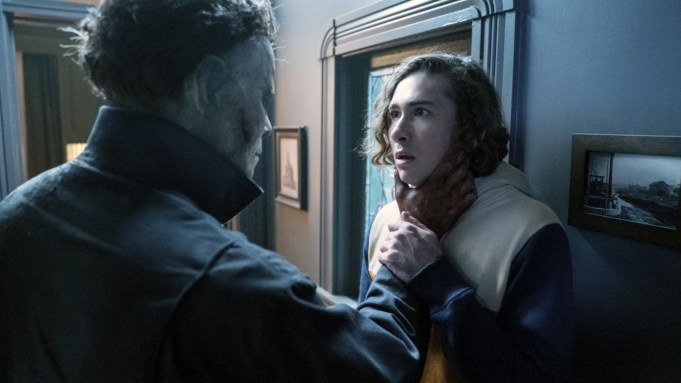 “Halloween Kills” slashed its way to $4.9 million in Thursday previews.

The Universal Pictures and Blumhouse Productions horror flick is the latest blood-soaked installment in the long-running “Halloween” franchise, a series that is firmly in its fifth decade. And despite being comfortably middle-aged, “Halloween Kills” is projected to generate $35 million to $40 million in its first three days of release. That’s a big drop from the $77 million bow that its predecessor, 2018’s “Halloween,” generated in its inaugural weekend, but it’s still an impressive figure. That’s because unlike that earlier entry in the Michael Myers chronicles, “Halloween Kills” will premiere on Peacock, the NBCUniversal-owned streaming service, on the same day as its theatrical release. That could curb ticket sales, as it has for Warner Bros. releases like “The Suicide Squad” and “Cry Macho” which have debuted simultaneously on HBO Max. That’s to say nothing of the ongoing COVID pandemic, which is far, far more dangerous, deadly and disruptive than anything John Carpenter, The Godfather of the “Halloween” franchise, could have cooked up.

“Halloween Kills” will have some competition in the form of 20th Century’s period drama “The Last Duel,” which is aiming to collect a muted $10 million in the U.S. That’s a paltry launch for a film starring Matt Damon, Adam Driver, Jodie Comer and Ben Affleck, which only delivered $350K in Thursday night previews.

“Halloween Kills” follows Laurie Strode (Jamie Lee Curtis) after she learns that Myers did not die in the fiery inferno she cooked up at the end of the last movie. Laurie rallies her daughter Karen (Judy Greer), granddaughter Allyson (Andi Matichak) and the town of Haddonfield to rise up against Michael Myers as he prepares for his umpteenth blood-letting. There’s already a sequel, “Halloween Ends,” scheduled for Oct. 14, 2022, so chances are she won’t be able to land a fatal blow. David Gordon Green returns behind the camera, having previously helmed 2018’s “Halloween.” In another life, he also oversaw small indies like “Undertow” and “George Washington” before making the move into more mainstream fare like “Pineapple Express.”