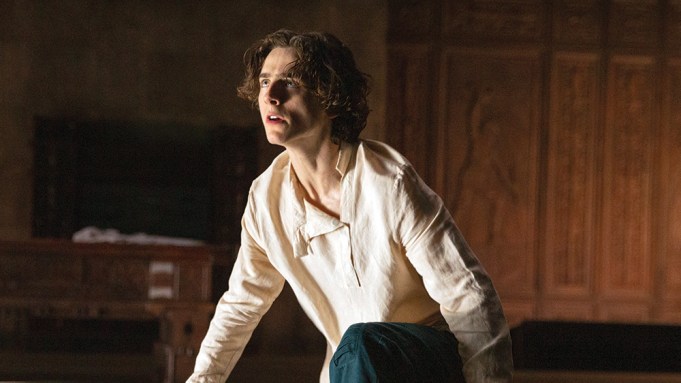 “Dune,” an ambitious adaptation of Frank Herbert’s famously unadaptable sci-fi epic, opened to a lordly $5.1 million in Thursday previews. The film will unspool across 4,100 theaters in the U.S. and Canada on Friday and is projected to generate $30 million to $40 million in its first three days of release. “Dune” centers on a group of aristocratic families who are vying for control of a desert planet that contains a natural resource, dubbed “spice,” of enormous value.

The Warner Bros. and Legendary production is debuting simultaneously on HBO Max, which could depress ticket sales. That’s part of a larger corporate strategy undertaken by the studio which opted to debut all of its films day-and-date on the streamer as a concession to COVID-19. By way of context when it comes to “Dune’s” preview results, last weekend’s box office champ “Halloween Kills” nabbed $4.9 million from Thursday evening shows en route to a $49.4 million debut, while the James Bond sequel “No Time to Die” picked up $6.3 million over its Thursday and Wednesday screenings before debuting to $55.2 million.

One of the weekend’s other major wide releases, “Ron’s Gone Wrong,” an animated adventure from Disney and 20th Century, grossed $240,000 in previews. The sci-fi comedy cartoon is estimated to open to a muted $7 million to $10 million this weekend.

“Dune,” which was largely embraced by critics (a few griped it was more style than substance and hard to understand), is directed by Oscar nominee Denis Villeneuve, the auteur behind such cerebral spectacles as “Blade Runner 2049” and “Arrival.” It stars Timothée Chalamet, Rebecca Ferguson, Oscar Isaac, Josh Brolin, Stellan Skarsgård, Dave Bautista, Zendaya, Jason Momoa, and Javier Bardem and cost a hefty $165 million to produce. Villeneuve split Herbert’s door-stop of a novel in two and has said he would like to direct a follow-up. In an interview with Variety this week, WarnerMedia Chair Ann Sarnoff suggested that the studio will back a sequel.

“The story in itself sets up for a sequel. The production is so amazing and the storytelling is so compelling that it’s not going to be judged on box office alone,” Sarnoff said, explaining that the green light will be based on “the entirety of what ‘Dune’ can do for the company, including HBO Max.”