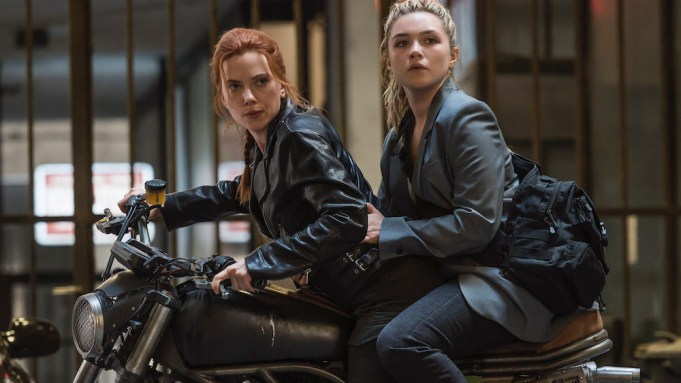 The “Black Widow” movie — in the works at Marvel Studios for more than a decade — is many things: It’s an accomplished action-thriller, a family dramedy, and even a rumination on the trafficking of girls and women. It’s the (likely) farewell to the Black Widow character for Scarlett Johansson, who has played Natasha Romanoff since 2010’s “Iron Man 2.” And it also introduces the prodigious talents of director Cate Shortland to Marvel’s massive audience, while showcasing the attention-grabbing, heartfelt performances of Florence Pugh, Rachel Weisz, and David Harbour as Natasha’s make-shift family — assembled at first in malfeasance by Russian evildoers, but later remade and then solidified by love in “Black Widow.”

In the present-day timeline of the Marvel Cinematic Universe, Natasha is dead, having sacrificed herself in 2019’s “Avengers: Endgame” in order for the team to acquire the soul stone. But “Black Widow” is set earlier, after the events of 2016’s “Captain America: Civil War,” when the Avengers who haven’t been jailed are on the run. Natasha is trying to hide, until she learns an old enemy she thought she’d killed is still alive and turning girls into assassins against their will, as he had with her and her sister, Yelena (Pugh).

In an interview with Variety, Johansson talked about returning to the character, having already played her death in the wrenching “Endgame” scene. “The whole process of making this was really emotional — I have such an affinity for Natasha,” Johansson said. “She has a lot of integrity. And I find her very, very touching.”

For Pugh, who is new to the MCU — though we will certainly see more of her sarcastically hilarious, yet wounded Yelena in the future — “Black Widow” is partly about reforming their “beautiful family.” Through their healing journey together, Pugh said that Natasha and Yelena forge “a sister story that really hones in on grief, on pain, on abuse, on being a victim — and living with being a victim.”

“That is incredibly beautiful and impressive that Marvel tackled it in this way,” Pugh continued. “And that’s solely to do with, obviously, Cate and Scarlett.”

Yes, Johansson, who’s also an executive producer of “Black Widow,” took an active role in convincing Shortland to direct the movie, though there was no shortage of directors who wanted to do it. Johansson calls Shortland’s 2012 effort “Lore” “a perfect film.”

“From the very beginning, it was Cate Shortland for me,” Johansson said. “She was very elusive!”

Through watching Shortland’s previous films, Johansson said, she could tell that the director would portray the Black Widow character differently. “She was interested in the parts of Natasha that I was interested in,” she said. “She would probably say something like, ‘All her messy bits!’ or something like that. She loves to examine all the flaws of a character, or the perceived flaws of a character — their insecurities. And she was so interested to pull apart this woman, you know?”

That Shortland is a woman — the first woman to solo direct a Marvel Studios movie — was also important to Johansson. And, she thinks, it was crucial to how Shortland’s portrayal of Natasha might feel different from how the character has appeared in other MCU movies. “It’s a big part of it,” she said.

Shortland was her particular ally on moments that seemed “false,” ones that “Cate and I both called bullshit on,” Johansson said.

“It couldn’t have been done with anybody else.”

The events of “Civil War” tore the Avengers team apart, cleaving them into opposing camps led by Steve Rogers (Chris Evans) and Tony Stark (Robert Downey Jr.). At first, Natasha thought Tony was smart to try to play by the rules being imposed on the Avengers by governments around the world, but by the end of the movie, she’s realized Steve was right all along. And her decision to help Captain America, while betraying Iron Man, has left her without the team that’s become her new family.

“Now, suddenly, she’s in this floating in-between place,” Johansson said about where “Black Widow” finds Nat. “And who is she?”

“Black Widow,” of course, was supposed to be released in May 2020, kicking off Marvel’s Phase Four movies. It was delayed, along with every other theatrical blockbuster, by COVID-19 — and kept getting delayed every few months. At long last, it will be released on July 9 both in theaters and on Disney Plus’ Premier Access tier, costing subscribers an extra $30.

But now that “Black Widow” is finally being unleashed into the world, both Johansson and Pugh are sanguine about its deferred path.

“I think everything happens how it’s supposed to,” Johansson said. “And I think it’s actually a perfect time for this film to come out.”

Pugh feels the same way. “To go back to the cinema if you can, and if you feel safe to, it’s such an epic film to watch with speakers and big explosions on the big screen — like, this is the film that you want to go back for,” she said.

She recently re-watched the movie herself, having not seen it for a year: “It just continues to surprise me just how epic this film is.”

In the world before COVID, “Black Widow” would have had a short window between completing production and its release, Johansson said — but the delay allowed the creative team “to work on it for a longer period of time, which is always fantastic.”

And the pandemic has caused its story to have unintentional resonances for the viewing audience, as we begin to gather again.

“It’s exciting in all the ways that you want a Marvel film to be,” Johansson said. “But it also is very grounded, and has so much heart — and it’s about the family you choose. And I think having all been separated for such a long period of time, and really reevaluating the things in our life that are important, I just think it’s a film that’s reflective of all of that.”

Johansson has waited a long time for “Black Widow” to come into existence, obviously. Now that it’s here, the question must be asked: Is this her final portrayal of Natasha Romanoff?

“I never feel like my work is done,” she said. “I still think of new ways I could try lines from movies I shot 10 years ago. I really am happy with the work I accomplished in my last decade-plus at Marvel. I feel like I’m going out on a high note with a movie I’m incredibly proud of. I feel like my work with Natasha is complete, if that is such a thing. I’ve explored many facets of her person, and feel that her choice to sacrifice her life for her best friends was one that she made actively and with resolve.”