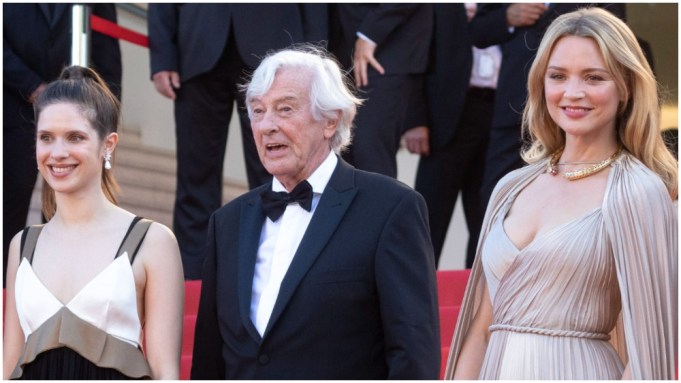 “Basic Instinct” director Paul Verhoeven slammed the new “puritanism” he perceives has taken over cinema during a charged Cannes press conference for his latest film “Benedetta,” saying critics “don’t want to look at the reality of life.”

The Dutch auteur has received a generally positive response to his risqué new film, which stars Virginie Efira and Daphne Patakia as two nuns embarking on an illicit lesbian affair in their convent. It is based on a true story from 16th-century Italy, as Verhoeven stressed multiple times during the press conference, even at one point reading a passage from a book depicting the women’s trial.

Fielding questions about feminism, blasphemy and nudity, Verhoeven, who recently denied “tricking” Sharon Stone into her infamous leg-crossing scene in “Basic Instinct,” appeared to grow increasingly defensive as the press conference wore on.

In response to a New York Times writer who asked about how Verhoeven crafted one much discussed scene in which an effigy of the Virgin Mary is used as a sexual aid, the director replied sharply: “Well you saw the movie.”

A question from a French reporter about a new “hysteria” regarding nudity drew further ire. “Don’t forget, in general, people, when they have sex, they take their clothes off,” he said. “So I’m stunned basically by the fact that we don’t want to look at the reality of life. Why this puritanism has been introduced — it is in my opinion wrong.”

When Variety asked whether Verhoeven would ever consider using an intimacy director, which are becoming increasingly popular in Hollywood, for his sex scenes, Verhoeven replied: “[The actors] themselves were the intimacy co-ordinators. I felt it. Sometimes it might be necessary but for the time being I believe not in France.”

Whether his actors would agree is a different story. “Virginie [and I], we got along with each other extremely well,” Patakia said diplomatically of their sex scenes. “So we weren’t afraid of anything. Maybe there was an initial fear that we didn’t know how to go about things right because Paul doesn’t talk a great deal.”