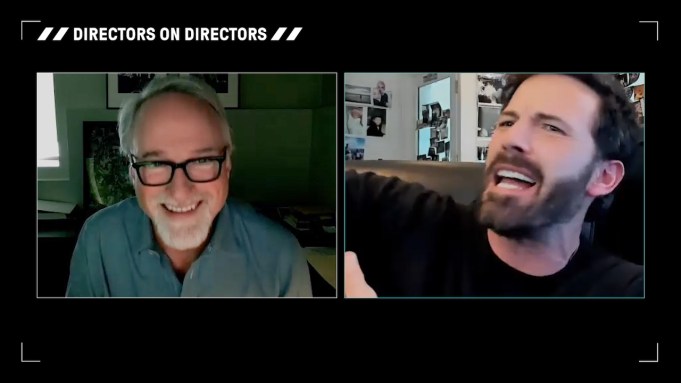 David Fincher’s films are known for displaying an actor’s full capabilities during an emotional scene, but that doesn’t always mean the director captures the right moment in the first take.

Appearing in Variety‘s “Directors on Directors” conversation series, Ben Affleck (“Argo”) proposes a theory to Fincher (“Mank”) about his two competing instincts as a filmmaker.

“One is a very specific idea of how you think it will work the best and how you’d like it to be,” Affleck said. “And the other is this profound desire to discover something accidental, different and new in the process.”

After working with Fincher on “Gone Girl,” Affleck was curious about why Fincher is insistent on taking so many takes on set, a technique that he said he loves.

“I would rather be doing takes than sitting in my trailer,” Affleck said. “It was wonderful. It also relieves you as an actor of this notion that there’s a finish line, there’s an end. We’re going to get ‘it’ and it’s going to be accomplished.”

Fincher explained how he was initially hesitant to ask his actors to take additional takes for certain scenes, but said it was worth tightening these scenes.

“It took me a while to get comfortable with the idea of saying, ‘Another one, and I want you to think about this,”‘ Fincher said. “So often, you’re pressed up against the glass going, ‘Please don’t take this the wrong way. I need you to come out, we’re going to try one more.’ It’s like Carrie said, ‘What am I doing wrong?’ You’re not doing anything wrong. We’re gonna do three weeks or at the rehearsal, we’re gonna do a table read, we’re gonna open out of town, we’re gonna have at least three previews. And we’re gonna do all that today before lunch with this master. We’re gonna go through all that so that you can get to a place where you go, ‘Yeah, I’ve tried this. I’ve tried that. No, really, it’s over here.’ And everyone can feel good about work. This is what we’re trying to tighten. This is the lump of coal that we’re going to try to turn into a diamond.”