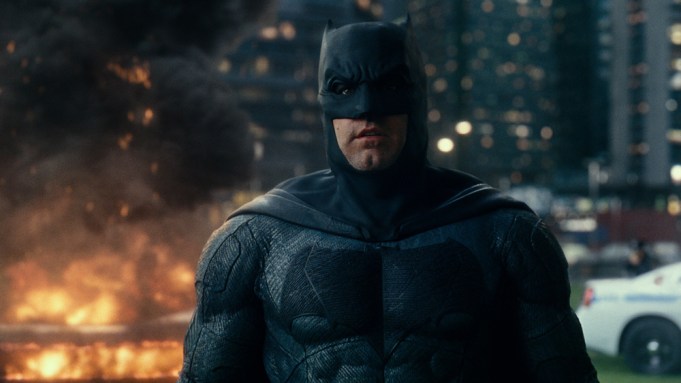 The upcoming DC Comics film “The Flash” put the fun back into Batman for Ben Affleck, after the actor endured Joss Whedon’s 2017 film “Justice League.”

Affleck will reprise his role as Bruce Wayne/Batman in the Andy Muschietti-directed “The Flash,” starring Ezra Miller in the title role.

“It was a really nice way to revisit that as the prior experience had been difficult,” Affleck told me Sunday at a tastemaker screening of his upcoming George Clooney-directed coming-of-age drama “The Tender Bar.” “This was really lovely. Really fun.”

He also said, “I had a great time,” before cracking, “I’m probably under some gag order that I’m not even aware that I probably just violated and I’m now going to be sued.”

He gushed over Miller as well as being able to shoot in the U.K. “I love Ezra and I had a chance to see Jason [Momoa], who’s over there making ‘Aquaman [and the Lost Kingdom],’” Affleck said.

Affleck isn’t he only Caped Crusader appearing in “The Flash.” Michael Keaton will also pop up in the universe-crossing film.

In “The Tender Bar,” Affleck plays a bar owner who becomes a father figure to his young nephew, whose dad abandons him and his mother for a career as a radio DJ. It is based on the Pulitzer Prize-winning journalist J.R. Moehringer’s memoir of the same name.

“It’s a movie about kindness and love and support and goodness, ultimately, of people,” Affleck said. “I think the world is a tough and ugly place, particularly now, so I feel good injecting this movie onto the world.”

“The Tender Bar” will be released in theaters in New York City and Los Angeles on Dec. 17, followed by a nationwide rollout on Dec. 22. The film will available globally on Amazon Prime Video on Jan. 7, 2022.