Continue to Variety SKIP AD
You will be redirected back to your article in seconds
May 17, 2021 12:28pm PT

Anthony Mackie Reacts to Sebastian Stan’s Transformation Into Tommy Lee: ‘I Was Horrified’ 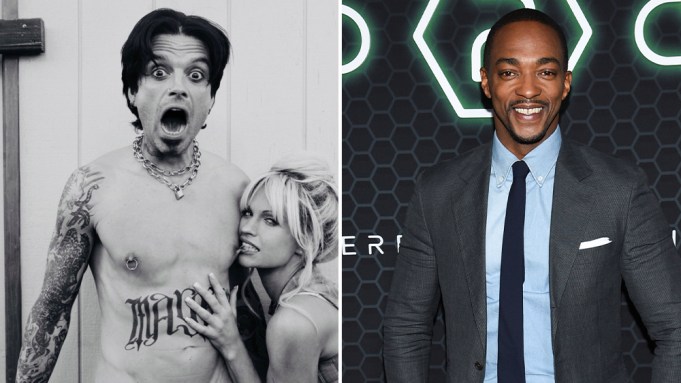 When Hulu released the first look at Lily James and Sebastian Stan as Pamela Anderson and Tommy Lee for the upcoming series “Pam and Tommy,” the internet praised both of the actors’ shocking transformations.

While speaking with Variety‘s Marc Malkin on Sunday at the 2021 MTV Movie and TV Awards, Stan’s “Falcon and the Winter Soldier” co-star Anthony Mackie joked that he was “horrified” when he saw his pal’s transformation pic.

“He sent me a video on set and a few photos and I was blown away,” Mackie said. “I was really surprised and impressed that he was able to do it. I was horrified. I was like, ‘What are you doing?! You’re playing Tommy Lee?’…It’s just humbling when you see your friend and he succeeds. And he crushed it.”

Humbled by his friend’s success, Mackie said it’s every actor’s dream to be able to transform into a role in this manner.

“Sebastian is a great actor…people being able to see him for the chameleon that he is, not just the beautifully amazing, blue-eyed god that he is — it’s very refreshing to see your friend win,” Mackie said.

After being involved in the ever-growing Marvel Cinematic Universe for over seven years, there’s no sign of when Mackie’s time will end. He joked that he’s hoping to be in the MCU for the next two decades.

Mackie first picked up the wings to play Sam Wilson in 2014’s “Captain America: The Winter Soldier.” When he first heard about the idea of a TV series revolving around the Falcon and Stan’s Winter Soldier, he said he was “very skeptical and very surprised.”

“I didn’t think we would be able to translate onto television what we do on film,” Mackie said. “I was blown away and surprised by how well they were able to keep the amazing scope of the film Marvel industry and take it onto Disney Plus.”