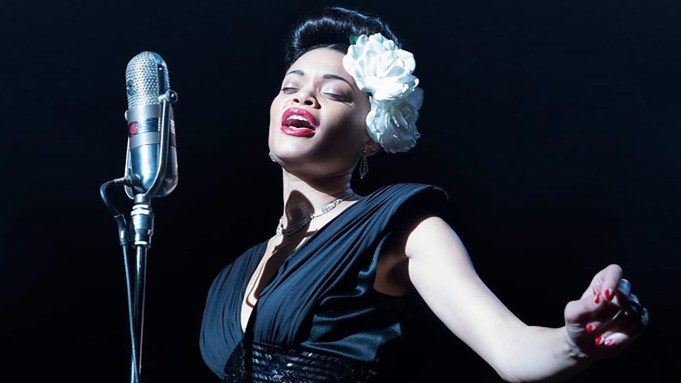 Making Golden Globes history, Andra Day won the Golden Globe for best actress in a motion picture drama, for her indelible performance in the Hulu film “The United States vs. Billie Holiday.” Day’s win underlines the Globes’ pitiable record with representation, as she’s only the second Black woman ever to win this award, after Whoopi Goldberg did 35 years ago for “The Color Purple.”

In a tearful acceptance speech surrounded by her family and friends, Day thanked “the amazing, transformative, dynamic Billie Holiday, who just just transformed me with this role and with her presence and with her spirit.”

This is Day’s first acting nomination and win at the Globes, and she’s the first winner in this category for a movie that debuted on a streaming service. Day, who started her career as a Grammy-nominated singer-songwriter, was also nominated with Raphael Saadiq for best original song (“Tigress & Tweed”). (“Io sì” from “The Life Ahead” won that award.)

“The United States vs. Billie Holiday,” directed by Lee Daniels (“Precious”) from a script by playwright Suzan-Lori Parks (“Topdog/Underdog”), dramatizes the final years in the life of Holiday, the renowned jazz singer who faced relentless persecution from the U.S. government over her performance of the song “Strange Fruit,” about the horrors of lynching.

The role of Holiday has a long history at the Globes. Diana Ross was nominated for her performance as the singer in 1972’s “Lady Sings the Blues”; like Day, it was also Ross’ feature film debut.

The Globes came under fierce scrutiny this month after a Los Angeles Times story revealed that the organization behind the awards event, the Hollywood Foreign Press Association, does not have any Black members. On Friday, former HFPA president Meher Tatna told Variety the body hasn’t had a Black member since at least 2002, when she joined. The same day, the activist organization Time’s Up posted a photo of a cracked Globes statue to Instagram with the hashtag #TimesUpGlobes. Hours later, the HFPA released a statement saying it was “fully committed” to diversifying its membership. During the ceremony on Sunday, three current members, including Tatna, also addressed the controversy, promising “a more inclusive future,” in the words of HFPA President Ali Sar.