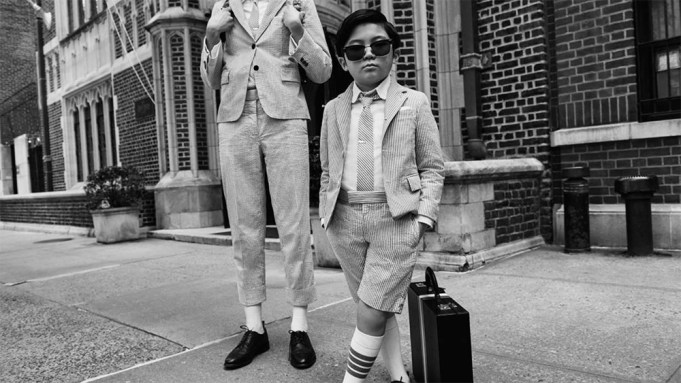 As the breakout star of the Oscar-winning “Minari” and a budding fashion icon, Alan S. Kim is combining two of his passions for a new creative project.

The 9-year-old leads the short film “Another Day in the City,” shot by Cass Bird for fashion brand Thom Browne, which dropped on Thursday.

Kim, who wore the designer for his stroll down the Academy Awards carpet this year, is repping Browne’s new collection of summer childrenswear — one that leans heavily on seersucker and sophistication. The film sees Kim and a pack of friends flip the script on the adults, shuttling them off to school and retreating into grown-up world for a day where “gossip, mischief and dancing ensue,” according to the brand.

Kim stole hearts last year in “Minari,” the A24 release about an immigrant family struggling for a piece of the American dream. Since the film’s released, Kim has signed with agency CAA and booked a role in the upcoming indie film “Latchkey Kids” alongside “Eighth Grade” star Elsie Fisher.

“I like wearing Thom Browne because the clothes are comfy. It isn’t too thin to make wrinkles, but it’s also not too thick to make it feel like you have fur, and it reminds me of New York,” Kim told Variety of the short shot on location in Manhattan, adding that his seersucker made him “feel all comfy in it because it has cloth that feels like memory foam pillows to relax.”

Kim is also repped by Mike Smith and Principal Entertainment.

Browne’s wares are beloved by Hollywood talent and power players alike. He is a three-time recipient of the CFDA menswear designer of the year award. His designs have been recognized by museums including the Costume Institute at the Metropolitan Museum of Art, the Museum of Modern Art, the Victoria & Albert, the Costume Museum at Bath and the Mode Museum Antwerpen. His line is carried in over 300 department stores and counts specialty boutiques in key markets like New York, Milan, Tokyo, Hong Kong and Beijing.