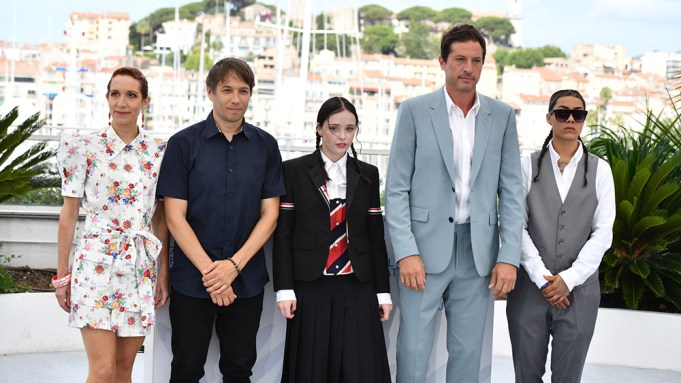 The 74th edition of the Cannes Film Festival came back to a roaring start on Tuesday night.

As the end credits of this year’s opening night film “Annette” rolled, the crowd stood — as they often do — for an ovation. Director Leos Carax smoked a cigarette from his seat in the Palais out of relief. He then handed one to his star, Adam Driver, who lit up and puffed at the cameras, while the crowd cheered for five full minutes.

It was by no means a record for Cannes, but it also felt like the crowd wasn’t just celebrating the movie. The world’s glitziest film festival had pulled off a comeback, after taking a year off in 2020 due to COVID-19.

Indeed, it was not the same Cannes that met crowds two years ago on the French Riviera. While many of the visitors at Cannes have been vaccinated, there have been added precautions as the Delta variant sweeps across the globe. The festival requires that attendees from outside the European Union submit to a saliva COVID test every 48 hours to be allowed into non-theater indoor venues, the Cannes market, press conferences and market presentations.

An ecstatic Driver, a French-speaking Jodie Foster, a pink-suited Spike Lee and surprise guest Pedro Almodovar all marked the return of the Cannes Film Festival at a glamorous, emotional opening ceremony.

Making the humid evening even more poignant were homages to a pair of American legends, Foster and Lee, the latter serving as the first Black jury president in the history of Cannes. While last year’s Venice Film Festival took place last fall with a two-meter wall obscuring the red carpet and blocking fans, Cannes has tried to return to its original form. It made for a symbolic reunion of the film world, from actors to filmmakers and industry figures many of whom hadn’t seen each other in person since 2019.

The enduring pandemic resulted in some added safety precautions. Masks were removed briefly on the red carpet, offering photographers the full faces of A-list stars such as Helen Mirren, Jessica Chastain and Maggie Gyllenhaal (also serving on the jury). Lee cut an impressive figure in a loud pink suit with matching sunglasses. Marion Cotillard, who stars in “Annette,” was dressed in old Hollywood glam — Chanel couture, of course —  reminiscent of the one she wore to the Oscars the year she won best actress for her performance in “La Vie en Rose.”

The reception for “Annette,” which will be released in the United States by Amazon Studios, was mixed. The musical — about two star-crossed artists who give birth to a baby girl, the film’s title name (who is largely portrayed by various dolls) — is in no way conventional. As the movie barreled on with a soundtrack of melancholy songs, hundreds of guests fled their seats and left the premiere midway through the film.

Driver, who is also a co-producer on “Annette,” was able to attend the world premiere even though he’s mid-shoot on Noah Baumbach’s “White Noise” opposite Greta Gerwig. Earlier in the evening, Driver and his cast ascended the stairs to the Lumière to the original music composed by the rock band Sparks, which is featured in the movie. Perhaps as a sign of how eager the crowd was to be back at Cannes, the cast of “Annette” received a lengthy standing ovation even before the movie started. Driver even joined along in the clapping.

The evening began with a lengthy presentation, which is customary for Cannes. Foster, who attended a French school as a child and gives her Cannes speeches in fluent French, is receiving an honorary Palme d’Or for her career.

Foster dazzled the French crowd by speaking their native tongue perfectly, asking the audience, “So it feels good to come out, to dress up? Did you miss the glamor?” The Oscar-winning actor went on to say that cinema faced some setbacks during the pandemic but was still there, “more alive than ever to move us, entertain us. and give us shivers or make us laugh.”

Just before Lee received a standing ovation, he said, “I got one thing to say before I sit down. I wish I could speak French like Jodie Foster.” Clips of the Oscar-winning director’s celebrated filmography — from “Do the Right Thing” to “BlacKkKlansman” — were shown via montage set to Nina Simone.

Inside the auditorium, Cotillard dangled a black mask in her hand but didn’t put it on as she took her seat. Many spectators ditched the masks as soon as they were seated, and the ushers largely ignored the rules that required them to keep their faces covered up.