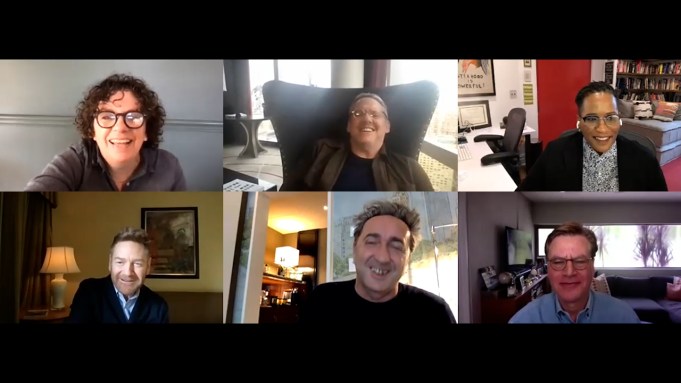 For Variety’s FYC Fest, screenwriters Aaron Sorkin (“Being the Ricardos”), Paolo Sorrentino (“The Hand of God”), Adam McKay (“Don’t Look Up”), Tracey Scott Wilson (“Respect”) and Kenneth Branagh (“Belfast”) gathered virtually to discuss their own individual movies, as well as the state of the film business.

McKay kicked off the conversation by talking about how he’d adjusted “Don’t Look Up” — his Netflix comedy-tragedy about a comet hurtling toward Earth — because of COVID-19, when current events had made daily life even more surreal. “There were a lot of tweaks we had to do with the movie to make it a little crazier, to make it a little less on the head,” McKay said. “One of the strangest writing experiences I’ve ever had.”

Though the writers’ films varied in subject and execution, there was common ground between Sorkin and Wilson, who’d written biographical portraits of iconic artists, and Branagh and Sorrentino, who had both delved into painful events from their own childhoods.

On creating the character of Lucille Ball in “Being the Ricardos,” Sorkin said he wanted to limit how much of “I Love Lucy” he showed the audience, so it didn’t make the movie appear to be a “cover band doing the greatest hits.” He instead used moments from the classic sitcom to reveal who Ball, played by Nicole Kidman, was: “We’re understanding that she’s a comedic chess genius, and at a table read, being pitched a story in the writers’ room, in rehearsal, she is able to see a joke on the page, project ahead to show night or it’s air date, whether it’s going to work or not in front of an audience.”

And when it came time for Wilson to show how Aretha Franklin’s version of the song “Respect” came to be, she wanted to make sure the movie gave it meaning and context. “Obviously, we had to show her most signature song, but to show what she was going through when she sang that song, what she was going through that made her arrange that song in that way so that the song could take on a new meaning for the audience,” Wilson said. “Because ‘Respect’ is one of those songs that became an anthem for the woman’s movement. It was an anthem for the civil rights movement. It was an anthem for so many people for so many different reasons. And for it to become something that we can see why Aretha sang that song and for it to have a new meaning for the audience.”

As for creating Aretha Franklin — who was, as Wilson said, “very, very private” — as a character for Jennifer Hudson to play in “Respect,” she said: “A lot of the things that I learned about her were from other people. Through her sisters. She grew up around a lot of very famous people who spoke about her.”

Sorkin, who’s created fiction about a lot of real people over the course of his career, said: “Everyone has their own internal compass. If your internal compass is broken, the studio’s legal department will usually help you fix it.”

He then expanded on the difference between fictionalized versions of real events and journalism. “One is a photograph and the other is a painting,” Sorkin said. “Even when it’s nonfiction. And not to get too cute about this, but there’s a difference between truth and accuracy. Accuracy is what happens or what’s supposed to happen in journalism, but it’s possible that you have to sacrifice accuracy in order to get at a more important truth.”

For Branagh, the early days of the pandemic inspired him to write “Belfast,” his memoir about his childhood experiences of The Troubles in Northern Ireland, which led his family to move to England. “I found that generally life seemed much more silent,” he said. “There were no planes in the sky. I’ve got a dog; I walked the dog a lot. And when the planes stopped and the motor cars stopped, the sounds for me of Belfast came into my head. And somebody asked me a little while ago how long it took me to write the script. And I said, I guess practically about 10 weeks. And they said, ‘Yeah, 10 weeks and 50 years.’”

He called those terrifying days in Belfast an “adrenalized state of uncertainty,” which resonated with how he felt in spring 2020, and added that “human beings [are] not very good at dealing with uncertainty, and neither were we back in 1969.”

In “The Hand of God,” Sorrentino depicts the most agonizing event of his life: the sudden death of both of his parents when he was a teenager. When asked why he decided to make the movie now, he said: “I think it’s important in order to do an autobiographical movie, to avoid some traps, like to be rhetorical, to be indulgent with himself. And so I thought that after 10 movies, maybe I was able to avoid these kind of traps.”

Sorrentino also directed “The Hand of God,” which meant he not only had written those devastating scenes, but had to illustrate them for the movie as well. How difficult was that? “I was always ready to cry, but as everybody knows, the crew is always ready to distract you with all the problems of the day, about lights, about costumes, about catering, what time we will do the break for lunch,” he said. “So it was very helpful for me in order to be not focused on my desire to cry every second.”

The original screenplay panelists also discussed filming during COVID; tweaking (or not) their screenplays for the actors in their casts; whether, as McKay says “Trump destroys narrative”; the future of movie theaters — and seeing their own movies in theaters this year.

For those things — and much more — watch the full video discussion.