‘18th & Grand’ Filmmaker on the Rollicking History of L.A.’s Olympic Auditorium and the Powerful Woman Behind a Boxing Empire

Stephen DeBro’s new documentary “18th & Grand” weaves together boxing, wrestling, punk rock, roller derby and local history with an “only in L.A.” perspective that firmly situates the historic auditorium in the city’s culture.

As the filmmaker was researching the history of the Downtown Los Angeles building and its many lives, one aspect stood out: the formidable presence of Aileen Eaton, who became a powerful figure in the sporting world and in Los Angeles business over nearly four decades.

Eaton, a hard-headed businesswoman who rose from secretary to boxing commissioner and successful promoter, forms the centerpiece of the documentary that premieres Thursday at the Vineland Drive-In as the closing night of the Slamdance Film Festival. But there’s much more ground to cover over the building’s nearly 100-year history, including a revealing discussion with Roddy “Rowdy” Piper, who died shortly after his interview was conducted, as well as interviews with author James Ellroy, X’s John Doe, and many other prominent figures from the worlds of punk rock, roller derby, wrestling and boxing.

DeBro, a longtime music executive who makes his directing debut on “18th & Grand,” talks about why the Olympic, which now serves as a church, is such a pivotal location in Los Angeles history.

What made you choose the Olympic Auditorium as your subject?

Seeing images from the photographer Theo Ehret, the house photographer at the Olympic, triggered memories of growing up in L.A. and seeing the Olympic on television, watching wrestling and roller derby as a kid.

It started me on a path of discovery and led me to the story of Aileen Eaton. She’s one of those people that should be remembered but isn’t. Very few people remember who she was.

The deeper I got, the more interesting it became, from its opening in the ’20s and L.A. at that time, the context and the social history. It became the focal point to tell a larger story about Los Angeles in a way I hadn’t seen before.

Why was Aileen Eaton so significant?

She was a singular figure. After all, how many women were running major businesses in the 20th century, let alone something as male dominated as boxing and wrestling? She was a power player in city politics, she used the Olympic as a fiefdom. She ran for public office for city council, and her story is really amazing.

How did you track all the boxing figures down and gain their confidence?

I tried many times to get Oscar de la Hoya, and I can’t quite understand why he wouldn’t do it. He won his first title there, but for whatever reason, he didn’t respond. But he should be in the record of this building. We have Julio Cesar Chavez, one of the greatest boxers — that speaks to what we’ve been able to accomplish.

What was interviewing Roddy Piper like? Was he difficult at all?

It was one of the most memorable couple of hours in my life. It was a very intense interview. He had this incredibly difficult childhood, he was kind of a genius.

Obviously wrestling is what they call “a work,” in the sense that there’s predetermined outcomes. But there’s tremendous amount of physicality, plus lot of danger and a lot of injuries – there was the steroid era. He packed a lot of living into a compact life. It was a full life but it was not an easy one.

He wanted to make sure I understood he was a wrestler first and an entertainer second. The showmanship element was of course present, he wanted me to respect the work he put in as a wrestler and that was important to him that he knew that I understood that. Once I understood where he was coming from, we were great. It was a journey.

Were you a punk rocker who went to Olympic shows?

I was involved in the punk scene earlier, but the ultra violence of the hardcore scene was never my scene. I’m not an expert in any one of these fields, so it depended on finding the right people, guys along the way who knew the culture. For punk rock it was Gary Tovar, the founder of Goldenvoice. He’s a brilliant, fascinating guy. He had an idea about putting punk rock on a level playing field as other music at the time — it was valid and had a place. He was a real strategist about how he did what he did.

Why was the Olympic so memorable?

It was a state of the art building that opened in the 1920s and by the end it was this cigarette and pee-smelling old building that had a heart and soul that kind of reminds me of L.A. I wanted to make sure we covered the story of the building and the woman who made it go for so long, and end it in a way that would feel satisfying.

There are many docs about Los Angeles, and oftentimes they focus on the Hollywood story, the noirish side of L.A. But the Olympic was an interesting center point which was the beating heart, with the veins spread out through the neighborhood. By the end, they got rid of the marquee and the hand painted photographs of boxers, renamed it the Grand Olympic and tried to make it a multipurpose venue and it was a failing effort.

What were the people like who came to the Olympic over the years?

The largest part of the audience was Mexican American and Mexicans who came across the border. Fighters from the smaller weight classes were Mexican American, and I wanted to make sure their story was told and there was representation of their voices.

It’s a very interesting group of people who are into this project. A lot of the punks like the roller derby scene, but boxing fans are very critical. There’s overlapping circles, with the main one being L.A. 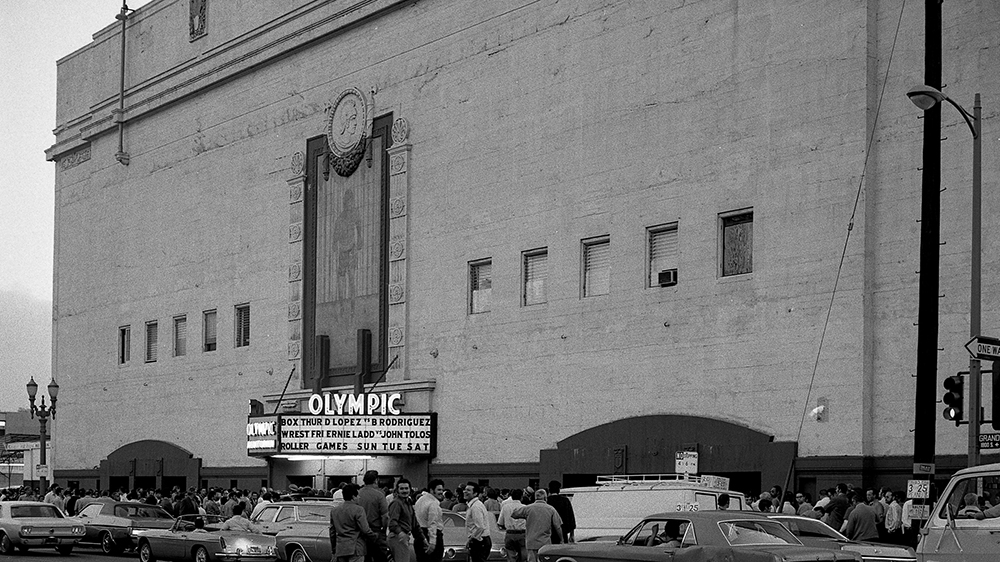 Roller derby is its own world. It was incredibly unique in that it had both male and female teams, it was racially mixed, gay and straight. They would have open calls on the radio, that’s how Gwen Miller (“Skinny Minnie”) from Pacoima got there. She was a great athlete, she had never skated before and she became one of the stars of the T-birds. Wayne Gretzky was a great admirer of hers. They were superstars, at least in L.A. It got huge for a minute.

What would you like to see happen to the building?

I’m respectful of the church. In the same placesas people fought and bled and died, they have their community. If that were ever to change, it’s still structurally sound, it’s built for great sightlines – there’s no reason it couldn’t be used again as a venue.

It should be landmarked. It fits the criteria on every level, it was built by Gilbert Stanley Underwood, a famous architect. More importantly, it was a cultural meeting place for so many different generations of people, and there are a lot of strong feelings about the building that exist to this day.