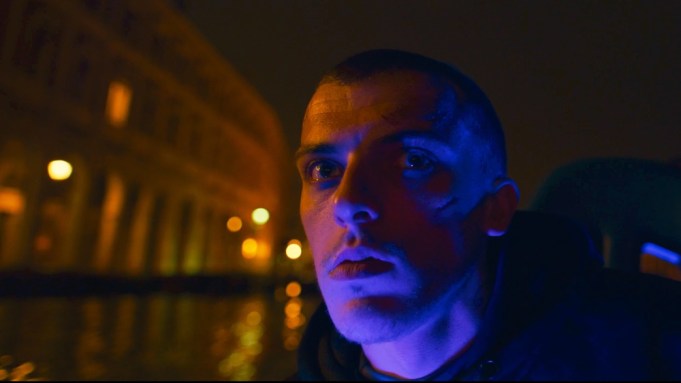 “Woody Allen loves Venice. But Woody Allen’s Venice is not the real Venice. It’s the Las Vegas version of Venice, and it’s not only him,” says Italian director Yuri Ancarani, whose youth drama “Atlantide,” which makes its world premiere in Venice in the Horizons section, might be described as the ultimate Venice landscape film.

Think beautiful shot after shot of the lagoons, peppered with sun-tanned youths working out their interest in speed (the motoring kind) through boats whizzing across one of the world’s most painterly waterscapes.

The music has also been updated, along with Allen’s postcard vision of the city.

“Vivaldi is always the music you associate with Venice but they play Trap,” says Ancarani, who is an award-winning visual artist and filmmaker that had his first solo show in the U.S., featuring three shorts, at the Hammer Museum in 2014.

Using the Red Monstro camera so that he could fly between speed boats, Ancarani wrote, shot and directed the film, which shows off his visual artist background through the sublime lagoon scenes. But it’s not his vision of Venice, he says.

“It’s filmed to show how these young people see Venice. It’s their Venice. They see the world differently to adults,” he says.

Ancarani chose a great setting to make a film for someone that is more interested in art than entertainment, however.

“Cinema has too much to do with entertainment these days. It has too little to do with art,” he says. “But I do believe my work has to last over time and not just be consumed immediately. I wonder if this is possible in cinema? I’m also told why don’t you make a film that might be appreciated by Netflix audiences. I don’t make entertainment. I want audiences to have an experience and ask questions.”

The impetus for making the film now was, he says, a 2018 New York Times article, which told people to stay away from Venice because it was then overrun with tourists and cruise ships.

“I had the project sitting in my drawer for a while,” he says. “I realized I had to run with it. Venice is one of the most beautiful cities in the world, but we Italians have a hard time protecting what is precious to us.”

The story revolves around a youth, who lives on the edge of the Venice lagoon and dreams of Barchino (motorboat). It shows Venice outside the tourist circuit. A world where speed boats replace fast cars. Where some of Venice’s locals, outnumbered by daily tourists, live.

Ancarani didn’t look too deeply into the city’s film archives to prepare the film. Instead he observed his real life characters over a number of years.

“I’m not interested in what has been done before. I’m interested in finding something new. I’m interested in the possibilities that exist also technically to make a film now,” he says. “But I’ve just seen the four sequences of ‘Death in Venice’ to see how the water shots were made but they were horrible. I thought I can’t shoot like that.”

Ancarani adds, “It’s a city that allows everyone to see something different. At the same time we like to see Woody Allen’s Venice.”

Luxbox is selling this Italo-France-U.S.-Qatar production, made with the support of MiC Ministero della Cultura, CNC, Eurimages, Region Emilia Romagna, and the Doha Film Institute.