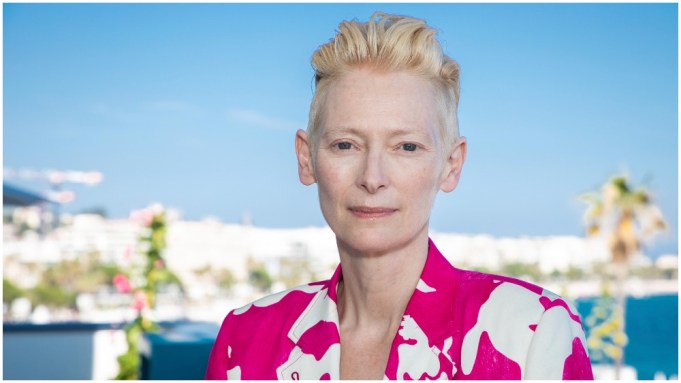 Tilda Swinton has called on streaming platforms to build cinemas across the globe to prove their commitment to the film industry.

“I want to see them building and renovating and putting back into every village in the world where they can reach, cinemas where people can have this life experience,” said Swinton, Variety’s recent cover star, during a Women in Motion talk at Cannes.

“The French Dispatch” actor, who has no less than five features debuting at the film festival this year, waxed lyrical about her love of cinema, calling herself a “cine-nerd.”

“We’ve all been into that awful dark place when we’ve wondered about the future of cinema,” she said. “And we’ve got this reprieve [in Cannes] and so we are grateful, and we’re — I hope — more connected back again to what we loved about cinema when we were children, and to that sense of wonder and to that sense of delight and transport.”

Swinton also discussed the issue of equal pay, admitting she had no recollection of being paid at all for her early work. “I don’t remember being paid for the first nine years of my life,” she said. “You know…we were working as artists.”

She said, however, that she didn’t believe she had ever been a victim of unequal pay. “I have scrutinized my bank balance over the last 30 years,” she said. “I’m not aware that I have ever been discriminated against fiscally but then I have worked in a kind of motley array of environments.

“At the same time, you know, equal pay is an absolute bedrock of all of our civil liberties in all areas,” she continued. “And I suppose the real issue is just awareness, amplification and awareness, that this might have been an issue and I’ve read the stories of women who have become aware that they have carried the can equally, or maybe even more — a heavier can — and yet their male counterparts have been paid more, and it’s laughable that in this day and age that should still be happening. So I just think the more awareness there is about it the better but I’m not aware that it’s ever been the case for me.”

The actor, who walked down the Cannes red carpet last week alongside her daughter Honor for their new film “The Souvenir 2,” also said she’d like to work with Honor again in future. “Absolutely, it’s more time to hang out together,” she said.

“That feeling of familiarity and and ease and trust is so important with work like that,” she said of “The Souvenir 2.” But I do stress that I think the fact that Honor and I are mother and daughter in real life is literally irrelevant. I mean, if she had been someone else’s daughter who we’d known who was as perfect a Julie as she is in the films, then it would have been just as good. I mean it’s the story of a different mother and daughter.”

“We’re all very reliant on each other for the atmosphere,” she said of the “familial” experience of working with “The Souvenir 2” director (and life-long friend) Joanna Hogg. “And so I think one has to really be with people who you trust very well. And — who knew? — my daughter is one of them.”