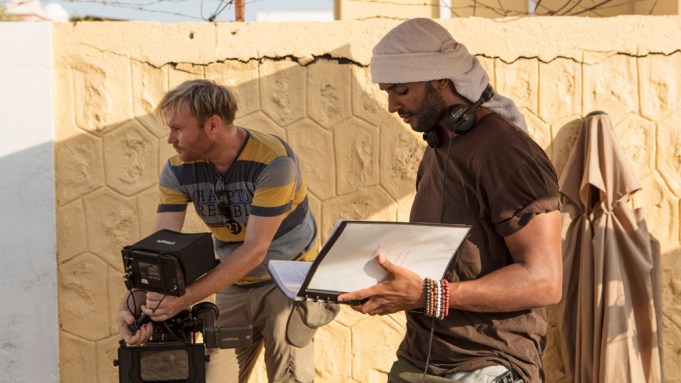 “We finished the shoot in 2019. We were invited to Cannes last year, but decided to wait for better times,” explains the helmer. “In Cannes, me and my family, and my actors, we were the only Somalis in the audience. Now, in Toronto, there is this big Somali community. They are excited and waiting for the film – people are sending me screenshots of their tickets!”

Inspired by a sudden death that happened in his family 10 years ago in Helsinki, the film shows a man who “hunts bodies for a living,” waiting in front of hospitals for new corpses to bury. But when his wife (Canadian model Yasmin Warsame) needs expensive surgery, gravedigger Guled (Omar Abdi) and his young son Mahad embark on their respective adventures in order to save her.

Counting Misha Jaari, Mark Lwoff and Risto Nikkilä of Helsinki-based Bufo among its producers, with sales handled by Orange Studio, the story gave Ahmed a chance to come back to his roots and – with the help of cinematographer Arttu Peltomaa, pictured – show the beauty of a country better known for its hardships, he says.

“People appreciate that I show these characters in a completely different light. They see it as a love story, just the way I wanted, but they also understand that even though this film deals with some heavy topics, it never gives up on hope. There are always miracles happening,” he says, describing early reactions as “overwhelming”.

“We are used to watching African stories through the lenses of Western filmmakers. It has been difficult for me: Everything is always about war or human trafficking, all these one-dimensional, stereotypical images one can imagine. I would go: ‘Where is the love?’ Where are the love stories I grew up with, love stories I have seen in my own family? I wanted to show there is love in that part of the world, too.”

“There have been a lot of talks but I have yet to see anybody doing anything about it,” he says. “Some actions need to be taken. Finnish cinema is so white – it’s not really that diverse, at all. I hope that this film, or this type of cinema, is going to push the industry into another direction.”

Admitting that even his crew members weren’t familiar with African films before the shoot, Ahmed also had difficulties with finding similar stories to Alain Gomis’ “Félicité” or Abderrahmane Sissako’s Oscar nominee “Timbuktu” in Finland.

“There is no place for them in this country. If you look at

Yle Areena, there are lots of European films, American films, but you don’t see African films. Even at festivals, such as Love & Anarchy, you see maybe a few, recruited from some other A-list events. Things won’t change unless Finnish audience is properly introduced to these types of stories,” he says.

“We used to hear that Black films don’t travel, which turned out to be a myth as well. Finnish distributors decide not to show them, but people are really interested,” he says, mentioning that, internationally at least, things are changing, with the likes of “Feathers” by Egyptian director Omar El Zohairy, “Neptune Frost” or main competition title “Lingui, The Sacred Bones” joining “The Gravedigger’s Wife” in Cannes this year.

“Before, you would have just one African film at the entire festival. I really hope it’s not just a trend but a real change that’s going to happen,” he adds.

Admitting he wanted to inspire other Somali filmmakers to make their own films in their mother tongue, Ahmed isn’t quite ready to stop.

“I was telling my friends, and my colleagues, that this is just the beginning. From now on, I want to make every film in Africa. That’s for sure.”