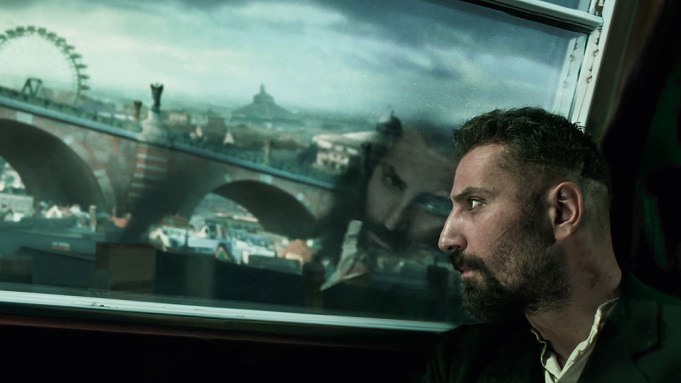 Stefan Ruzowitzky, who won an Oscar for “The Counterfeiters,” is at the Locarno Film Festival on Friday for the world premiere in the iconic Piazza Grande venue of his crime thriller “Hinterland.” He speaks to Variety about the film, which Beta Cinema is selling worldwide.

“Hinterland” centers on a former Austrian prisoner of war, Peter Perg, who returns home to Vienna in 1920. Everything has changed. The once mighty Austro-Hungarian Empire has crumbled, the imperial dynasty has been replaced by a republic, and myriad artistic, political and intellectual movements are questioning the old certainties. When a serial killer starts to pick off military veterans, Perg, a former detective, is brought in to investigate.

“Hinterland” was shot almost exclusively on blue screen, with the background depicting a distorted vision of Vienna inspired by Expressionist classic “The Cabinet of Dr. Caligari,” reflecting Perg’s jaundiced view of Austrian society. Ruzowitzky comments: “In these new times after the Great War, nothing feels right and straightforward to men like Perg; everything seems deformed and out of kilter.”

One of the things that attracted Ruzowitzky to the project was the aesthetic approach. “I was tempted to try something completely new and really use VFX – not to mimic reality – but to create a stylized reality,” he says.

Another factor that attracted him was the period. “If you do some research, you find out that the First World War was culturally a much bigger shock for people [in Austria] than the Second World War. And after the First World War, all these new political ideas, National Socialism, Communism… came along as well as new ideas like Dadaism and Surrealism in art and literature. People said, ‘What we’ve seen so far, it’s not true.’ And, ‘We can’t trust in the values and the ways of before the First World War’; whereas after the Second World War, it was the 50s, Doris Day and Marilyn Monroe – everything clean, and ‘Let’s not talk about [the war] anymore.’

“After the First World War, this was super interesting. So much changed. And to have a protagonist who’s faced with these changes, and has to deal with them, and to find out that they are not only a change to the world, but that there’s also something in it for him, I think that was interesting to work with.”

There is a renewed interest in the 1920s in Germany and Austria, Ruzowitzky says, as it is seen as an important period in terms of understanding what happened afterwards.

“In the last 30-40 years, for good reason, we have been obsessed with the Second World War, the Nazis and the Holocaust, because this generation was still alive, and it was absolutely necessary for society to deal with National Socialism while these people were still around, politicians who had a Nazi past, and judges and artists and whatever. And so it was all about that period of time. Because of that, the First World War, and the years right after that were never really an issue here, but in a way, it’s coming back.”

Unlike in Western Europe and the U.S., where the 1920s are known as the Jazz Age or the Swinging Twenties, in Austria it was more complicated and darker. “It is the biggest breaking point in our history, because the House of Habsburg had been here for, what, 800 years, and Franz Joseph was Emperor for almost 70 years, so the idea was nothing ever changes. It’s just as it is, and there’s no alternative and it’s not bad, but there is no dynamics in society whatsoever, and then World War One, and, boom, everything falls apart. We have a democracy, we have a republic, and I think in the States or in England, you don’t have this. It wasn’t such an important point in history. But here, in Germany and Austria, it definitely was. And we lost everything.

“This is sort of the story of the movie. When Perg goes to war, he leaves behind an empire, one of the superpowers of the world. It was Austria, Hungary, Czech Republic, Slovakia, Slovenia, Croatia, Bosnia, Herzegovina, parts of Ukraine, parts of Poland – an enormous empire. Then he comes back, and it’s this tiny little thing in the middle of Europe. That was a cultural shock for the German-speaking world.”

Ruzowitzky sees parallels between that period of instability and confusion, and today when public discourse is being tainted by doubt and division. “Twenty years ago, the world was a safer place, in terms of there were values and facts, and society was sort of agreeing on certain things,” he says. “Nowadays, whether it’s Trump’s fake news or the whole coronavirus denial, we don’t agree on what has been true for the last 200 years … believing that there’s scientific proof. Nowadays, who cares? Now, we have fake news, alternative news. You can make up whatever you like, with conspiracy theories, and it’s the lizard people, and everything is possible in social media. You can say whatever.”

In the film, the tormented Perg, played by Murathan Muslu (recently seen in Netflix series “Skylines”) finds an ally in the cool-headed forensic expert Theresa Körner (played by “Babylon Berlin” star Liv Lisa Fries), with whom he shares a dark past. Körner represents a more intelligent, nuanced approach to the complexity of the brave new world, whereas Perg is more simplistic in his nostalgic hankering after the certainties of the old world.

Ruzowitzky says: “I see him as an alpha male, deeply wounded and disappointed. He feels all these new developments are like an attack on him. He believed in God, the Emperor and the Fatherland, and his sort of basic values don’t exist anymore. It’s a hard time for him to accept that this new world is changed for the better. And that’s what is represented by Dr. Körner, who says, ‘Well, it wasn’t all good what we had before, and now things break up and there are possibilities for everybody. For women, for example.’ I think in the beginning he just refuses to see that… that there’s also something good about these changes.”

In Hanno Pinter’s original version of the script the story of the love affair between Perg – who finds it impossible to get back together with the wife he left behind – and Körner didn’t exist, but Ruzowitzky saw a need to add it, as Körner represents something far bigger than just a lover. “His wife represents his old life and he’s not ready to face that, he’s not ready to face his wife. And then he meets this other woman, and she represents these modern times, and then I just felt it makes sense that this is not only a professional relationship, but also an emotional one,” he says.

There have been plenty of films that have utilized visual effects to create new worlds, but for Ruzowitzky it provided a chance to create something that had never been seen before in cinema in terms of artistic expression, with a montage of images forming the background. “The guy who designed that [Oleg Prodeus] would combine images from different angles to create this unreal world. I have not seen this done before. Of course, what you have are movies that use VFX to create fantasy worlds, but I think there are no real role models for what we have or not that I would know of.”

Developing the look was not straightforward. “We did a test shoot, only to find out that our first ideas did not work. We tried too much to just mimic reality. And then we realized, the whole endeavor only makes sense if we really create something completely new, and we just go for it. Recreating what you could shoot on location wouldn’t make any sense.”

The influence of early Expressionist films, such as “The Cabinet of Dr. Caligari,” was crucial. “The basic idea of Expressionism is that there’s not just one perspective to the face. You show several perspectives at the same time and include movement. The Expressionists wanted to show something beyond what the eye can see, and this is what we tried as well – not to show a house as it is, but to show it in the way a traumatized person would perceive it. And this is why we have the same approach as the Expressionists had. ‘Dr. Caligari’ is famous because the set designs were stylized in an Expressionist manner and we do sort of the same thing, but with contemporary technologies.”

All the scenes had to be storyboarded three months prior to the shoot so that the cast and crew were fully prepared. “We had to know exactly what they are touching. Because whatever the actors had physical contact with, these items had to be on set. And we had to know where the light was coming from. So all this had to be decided early on. In the beginning, we tried to have the designs first and then make the actors move in these pre-produced designs. But that didn’t work, because those designs were unreal. And so we had to do it the other way around. We had the basic idea of the background, and then we shot the scene and then the visual effects designers had to adapt the background to the acting.”

Ruzowitzky says making the film taught him that VFX technology can be used for more artistic endeavors that just retouching shots or creating fantasy worlds. “This is not a fantasy superhero movie, but an arthouse movie, and we really used it to bring across a message and create a very specific visual style, and this technology is also good for that, and not only for superheroes, and wire removal.”

Ruzowitzky says he would like to make another film like “Hinterland,” and that the lead producer, Oliver Neumann, is even considering producing a sequel.

“Yes, it was an interesting process. And, for me, the most interesting thing was to learn that usually you have all these limitations. You can’t do this. You can’t do that. And then you find the location, but it’s too small. Whereas here, doing ‘Hinterland,’ everything is possible. And you have to invent a whole world from scratch, and usually you have an existing location with all its limitation. Here, could say, ‘Yeah, whatever.’ I want to have two more cathedrals in the background, and then click, click, here you have two more cathedrals in the background. And this is a burden in a way, having no limitations, but you’re free to do whatever you want.”