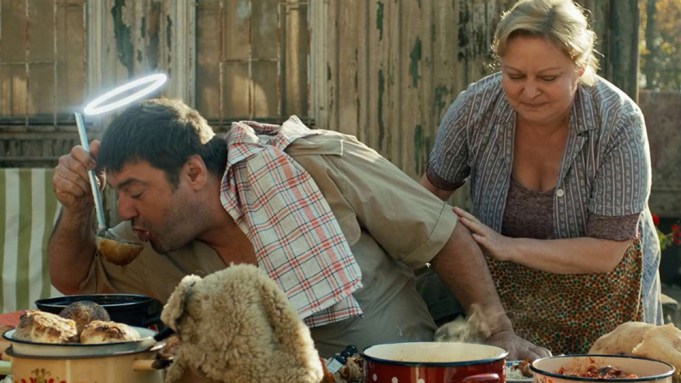 Serbian director Srdjan Dragojevic, best known for Thessaloniki awarded “Pretty Village, Pretty Flame” and Berlin prize-winner “The Parade,” is at the Locarno Film Festival with dark comedy “Heavens Above,” which is in the International Competition lineup. He speaks to Variety about the film, which has Pluto Film attached as its sales agency, and looks ahead to financing his adaptation of Julian Barnes’ novel “Porcupine.”

“Heavens Above” centers on Stojan, played by Goran Navojec, a simple-minded yet kindhearted man. When a freak accident puts a glowing halo above his head, he quickly becomes an object of veneration. His strong-willed wife Nada (played by Ksenia Marinkovic) isn’t amused by the attention her husband is attracting, so when a TV preacher suggests that sinful behavior will remove Stojan’s sainthood, Nada encourages him to commit as many bad deeds as possible.

“Heavens Above” follows Stojan’s family and an assortment of odd-ball characters across three decades, exploring the impact of miracles in modern-day society. Numerous characters reappear, intertwine, and affect each other’s destinies in increasingly bizarre circumstances. Through these stories, Dragojevic conjures up a grotesque vision of former communist countries after their shift into capitalism.

Dragojevic, who is also a poet and for a short time worked as a psychotherapist, sees the film as being about the development of the Balkan region. “The 90s were a time of war. In the 2000s, there was some kind of new era, a transition; and the future, that is not so bright,” he says. “My decision was, from the beginning, not to talk about Serbia, or even ex-Yugoslavia. I think it’s a story about Eastern Europe and how after 50 or more years of communism, people are getting back to Christianity.”

He says that the period in the future depicted in the film, “resembles early Christian centuries, when the pagan gods and Christ live in co-existence and combine in various, and even eccentric shapes. So that’s how learning about Christianity looks like in ex-communist countries.”

The film is inspired by short stories by French author Marcel Aymé, which Dragojevic came across in his early 20s, when he was a promising young poet and had yet to start making films. “I always thought that these short stories would be fantastic for film. Three decades later, I found that book again in the library. And I thought: ‘These are the perfect stories to be told when you are getting into this period of life when you think about serious issues, like Christianity, miracles, and things. So that’s how I started to develop the script.”

Dragojevic says that, firstly, he set out to examine whether “we believe in an Old Testament God who punishes, or in a God of love and forgiveness.”

Over the course of the film, Stojan rises through the ranks of society from local gangster to commander of the local jail, and finally president of the country. Corrupt and avaricious politicians are one of the many targets of the film. In one scene an artist is seen painting a fresco in a church in which local politicians and businessmen are depicted as saints, because they have given money to the church’s venal priest.

Popular culture is another target. Nada, for example, is “a metaphor for the influence of the contemporary tabloid press and reality television that pushes people to sin,” he says.

The commercialization of art is yet another target. In one section of the film, a painter’s work is found to give physical nourishment – an alternative to food – to those who view it. This prompts an important question for the filmmaker: “What is the nature of our mission as artists? Should we consider it important when our art fills the stomachs of the film funds, the producers and the distributors, or are we free to create just for the sake of creation? Probably the most important thing is how we reach God.”

As to his approach to cinema, Dragojevic says: “Well, I’m a leftist and I believe the working-class deserves quality cinema, not Netflix and the superheroes stuff, and I’ve spent my whole career trying to make films for the common man.”

He adds: “I don’t intend to make populist films. I make films I would like to watch. I mean, I’m still a film fan, and spent years in the cinematheque. I am a big fan of Ealing comedies, and I make films with elements that are not easy to put together. I am an eclectic and a Post Modernist.”

He dislikes the term “creative industry” when applied to cinema and the other arts. “I mean, it’s not art anymore. It’s industry, which it is obviously not. Making money is scary, isn’t it?”

He studied psychology, and practiced psychotherapy for some years but “got bored.” “Sometimes I use my experience from practicing psychotherapy. It’s a way – in a positive way – to manipulate audience emotions. When you start with comedy, you relax the audience, and then things become darker and darker, more and more serious.”

Dragojevic’s sister is a nun, he says, so he gave her the script to read. “I was shaking when she saw the first version of the edited film, but she liked it. She said it’s a really Christian film, and there is nothing blasphemous in it. And then I asked her to give the film to an Orthodox bishop, who loved it. He is an intellectual. Then a Catholic bishop from Croatia saw the film, and he liked it quite a lot. And they understood most of the things that it is talking about, but I do not have high hopes that an ordinary member of the audience will pick up everything.”

The financing of the film is a kind of miracle itself, being one of the few films to draw together production partners from all corners of the former Yugoslavia, with only Kosovo missing. The lead producer is Biljana Prvanovic of Delirium in Serbia, and he is joined by co-producers in North Macedonia, Slovenia, Croatia, Montenegro, Bosnia and Herzegovina, as well as Germany.

Among his future projects, Dragojevic hopes to bring the financing together for his long-gestating adaptation of Julian Barnes’ novel “Porcupine,” partnering with producer Mike Downey. The story, set in a fictional Balkans country shortly after the fall of communism, is a “bizarre political thriller” about a dictator put on trial by a young prosecutor. To everyone’s surprise the dictator presents a formidable defense of his time in power.

Dragojevic says the story reflects the rise of nostalgia for socialism in the former communist countries of Eastern Europe, because during the communist era people “had something that is probably the most important thing for them: that is stability.”