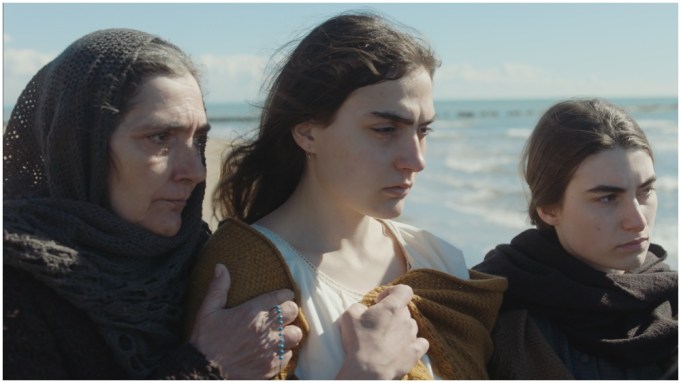 Italian director Laura Samani first came to Cannes in 2016 with a short made in film school titled “The Sleeping Saint” that premiered at the Cinéfondation and made a splash. She’s now back, this time in Critics’ Week, with her first feature “Small Body,” about a grief-stricken young woman who travels from her island village to a remote mountain sanctuary where she believes she can free her stillborn baby’s soul.

Samani spoke to Variety about the standout elements she wove into the “Small Body” story: female empowerment, Catholic culture and gender fluidity.

How did the project originate?

In 2016 I found out about the existence of a Catholic sanctuary in my region, Friuli Venezia-Giulia, where up until the end of the 19th century, particular miracles were said to occur: that stillborn children could be brought back to life for just one breath, during which they could be baptized. I also found out that there were nearly 200 of these sanctuaries in the French Alps. I became obsessed with this. What intrigued me is that usually it was the men who made the journey. So I wondered: what did the mothers do? And I tried to imagine what would have happened if a mother had made the journey.

Talk to me about the casting.

I found Celeste Cescutti, who plays Agata, when I did a casting call to shoot a teaser. It was open to non-professionals and Celeste was one of several hundred young women who showed up. She completely disrupted my plans because while writing the script I had envisioned a girl who was very fragile, restless and feverish. Celeste instead is exactly the opposite. She’s very calm and quiet. But after we shot the teaser we both knew she was perfect. Casting Lynx was more complicated. The film is spoken in dialect, so I was initially looking for non-pros in the region, but several people keep suggesting Ondina [Quadri], who is a seasoned actress [raised in Rome], and I decided to go with her.

Of course Ondina plays a woman who pretends to be a man. That’s an interesting choice.

We came up with the Lynx character after doing some historical research. The question we asked is: how could a woman survive and also live the life that she wanted to live in those days? The paradox is that although we travelled back in time, we came across a theme that is very timely today. Basically we have a character that is very [gender-fluid] and, thanks to this, manages to survive.

Why did you use the dialect of your region? This means the film will be subtitled in Italy as well as the rest of the world.

It’s a political matter. I come from a region that has a huge linguistic richness. There is a mix of different spoken languages that have become dialects. The linguistic “Italianization” of Italy during the mid-19th century had a political reason which was to unify the Italian ‘boot.’ And this process was accelerated during fascism. But in rural areas and among the lower classes the dialects did not die. In the early 1900s, in the milieu where the film is set, they were the only spoken languages. So it was important for me to maintain that for historical believability.