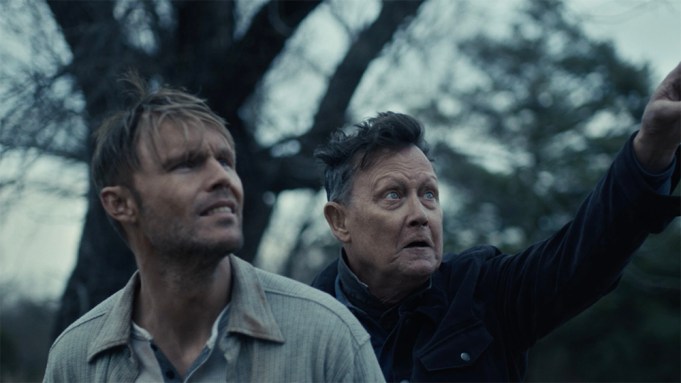 Flying largely under the radar, startup shingle Randomix Productions has shared in exclusivity a clip to Southern Gothic horror movie “What Josiah Saw,” one of the titles with the highest-profile star casts at Fantasia: Robert Patrick (“The Terminator”), Nick Stahl (“Sin City”), Scott Haze (“Child of God”) and Kelli Garner (“Lars and the Real Girl”).

“What Josiah Saw” also marks the third feature from Vincent Grashaw, whose intimate study of adolescent ordeal, “And Then I Go,” was picked up for U.S. distribution by The Orchard.

Structured into chapters – the first is set at Graham Farm on Willow Road, the second follows dissolute Eli, dispatched to a Romani encampment to steal its Nazi gold – the film turns on the estranged Graham family and a past that won’t go away.

Only Josiah (Patrick), the brutal, whisky-guzzling patriarch and Thomas (Haze), his cowed son, remain at the Graham Farm, which is said to be haunted after the mother’s suicide.

Josiah’s other children, Eli and Mary, are tempted back to the Graham place, after more than two decades of absence, in order to sell it, after Josiah suffers a terrifying vision that persuades him he must redeem the sins of his family’s past.

The vision sets the film’s main plot in motion. But Josiah’s vision, according to the father at least, comes with two riders. The mother says “she’ll send somebody to guide us. They’re going to come to me and me only,” Josiah claims.

Quickly, Grashaw and screenwriter Robert Alan Dilts, hint at a potentially toxic mix of patriarchy and faith in that it is left to the self-declared chosen, Josiah, to impose his vision which comes with the force of supernatural truth.

Variety talked to Grashaw in the build-up to the world premiere of “What Josiah Saw” at Fantasia on Aug. 13.

The clip which we’re bowing suggests a potentially toxic mix between faith and patriarchy….

That’s one of the things which I responded to in the script and the story overall, how it plays with this without total confirmation. I’m fascinated by religion. What I loved about the story was how it is very grounded.

“What Josiah Saw” looks like we’re in for a farm-set fright fest and, suddenly, you have chapter two and the story of Eli, 20 years after he’s left the farm, beginning with his having sex in a trailer parked in the middle of nowhere. It’s a radical change of tone….

The first chapter, with Josiah and Thomas, is a kind of one-on-one performance piece between the two actors. It’s very isolated and very intense. I want spectators to leave the chapter feeling very uncomfortable. Eli’s chapter is a bit more of an adventure, a little more entertaining, somewhat humorous. You basically meet the members of the family, see how they’ve coped with their lives for the last 20 years, and how the past never goes away. You don’t ever cure trauma. It’s sort of managed.

The film depends a lot, I sense, on actors’ performance. How did you handle this?

Vetting. You’re not really given the luxury on an independent film of rehearsing with actors. I met Nick Stahl on day one of shooting his first scene, though I’d talked to him on the phone. So I trust a lot the actors when I hire them and do a ton of vetting. I don’t hire an actor unless I know people connected to them that can vet for their character. You can get stuck on a movie where an actor can hijack your film.

How would you place “What Josiah Saw” in your career?

I’d written my first film, 2013’s “Coldwater,” some 12 years before. I spent my entire twenties trying to get it made. By the time it got financed, I almost didn’t want to make it. But you’re not going to turn down financing to make your film. I’d been trying to close that chapter in my life for a while. So when I did it was like, great. On “And Then I Go,” I got hired. I loved it. It was a really great film and experience for me. But “What Josiah Saw” is the first movie that I can totally take ownership of and is what I wanted to say at the time I got it made.