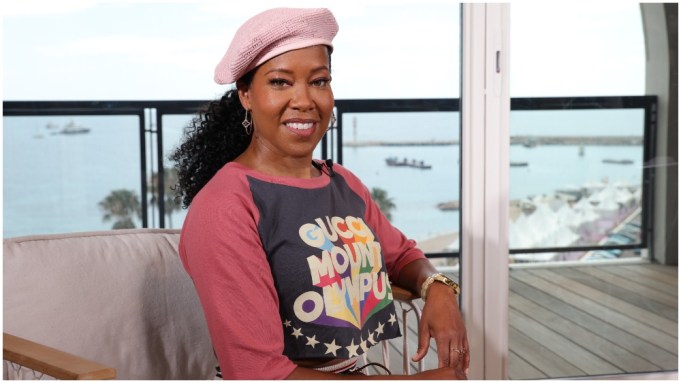 When Regina King was asked to take part in this year’s Oscars as a presenter, the “One Night in Miami” director had no idea what she was in for, and found out just 24 hours before the ceremony that she would in fact be opening the whole show with a “country mile” jaunt into the building.

In a Kering Women in Motion talk in Cannes on Friday, King revealed the last-minute nature of her iconic entrance to Variety executive editor Ramin Setoodeh.

“I knew I was presenting and the category, and then they said the category would be up first. And then I thought, ‘Oh, they’re really changing things!’ Then I got another call saying, ‘Well, it’s going to be a little more than your category starting first; we would like you to open the show.’ And I was like, ‘Open the show? I’m sorry. Open. The show?’ That’s a lot of pressure. I talked to [ceremony producer Steven Soderbergh], we Zoomed, he laid it down, they sent a script, we worked on it. I was like, ‘Wow this is a lot to take in 24 hours before, but you can do it!'”

The April 26 Oscar ceremony opened with a minute-long segment of King grabbing an Oscar from a table on the red carpet outside of Union Station, and striding into the building, all while a camera caught her every move.

King called Soderbergh a “great coach” she wanted to impress. “Steven believed in me, and I thought, ‘Alright, I can do it.'” The “Contagion” director also sent her a note advising her to consider a comfortable pair of shoes for the walk.

“I said, ‘It’s the Oscars! Of course I don’t have good shoes.’ But I brought the shoes to rehearsal and when I saw the distance — we call it a country mile — I was happy I had on the most comfortable shoes possible for the moment,” said King of her six-inch Stuart Weitzman heels.

“[Stuart Weitzman] makes the best shoes if you have to walk a country mile in six-inch heels. I gave it to God and said, ‘Let’s go.’ I walked it once for the rehearsal and once for the show.”

King is an Oscar winner herself for her supporting role in “If Beale Street Could Talk” (2019) but didn’t receive a best director nomination for “One Night in Miami,” her fictional account of a get-together between Muhammad Ali, Malcolm X, Sam Cooke and Jim Brown. (The film won Oscars for adapted screenplay and supporting actor.)

She spoke highly, however, of this year’s winner, “Nomadland” helmer Chloé Zhao, who became the first woman of color and the second woman to win the best director prize. “It was really, really exciting for a few reasons. Not just because Chloé is an amazing director, but so often we, as directors that aren’t white males, are telling stories that are very specific for our race or culture and here was a story that Chloé told that was just a really human experience. It’s not often we get the opportunity to tell a story like that.”

Elsewhere, King spoke candidly about the pay gap for male and female directors, revealing that she gets paid “more money right now” as an actor. She joked, “No, just kidding,” before crisply adding, “No, I’m not.”

She highlighted, however, that parity doesn’t even exist for female actors. “With a lot of women doing the same amount of work, we’re also mothers, so we’re doing more work when we get home and managing from the set. [For example,] when you get that phone call that the dog got out [of the house]. I’m not saying you fathers don’t get those calls, but I don’t see them as often as I do with mothers. So we have a long way to go with a lot of things. I hope I get the opportunity before I leave Earth to see change in a more significant way.”

King expressed a desire to continue both directing (particularly television) and acting long into her career. “It helps me [to direct] because you understand how vulnerable you feel as an actor. I feel I can approach a note with sensitivity…I feel I can also identify things that maybe sometimes as an actor you feel like something about a scene or this dialogue is not quite working right.”

Her next directorial effort is going to be Legendary’s adaptation of the graphic novel “Bitter Root.” She will also produce with Reina King and “Black Panther” director Ryan Coogler, Zinzi Coogler and Sev Ohanian of Proximity Media.

“It’s in the writing process now,” explained King of the project.

She continued: “I did not come across it; it came across me. Ryan Coogler reached out and asked if I’d heard of a graphic novel called ‘Bitter Root,’ and I said no. He said he thinks I would be an amazing director for it. And, I’m sorry but Ryan Coogler says he’s given me his stamp of approval? Of course I’m going to read it. When I realized there was going to be an opportunity to tell a story that’s more muscular — something I was looking and wanting to do — that was really exciting. And to be able to have another supportive team that I’ll have with Legendary and Proximity, you want to be where you’re supported and celebrated, not tolerated, and that’s what I feel with this team.”