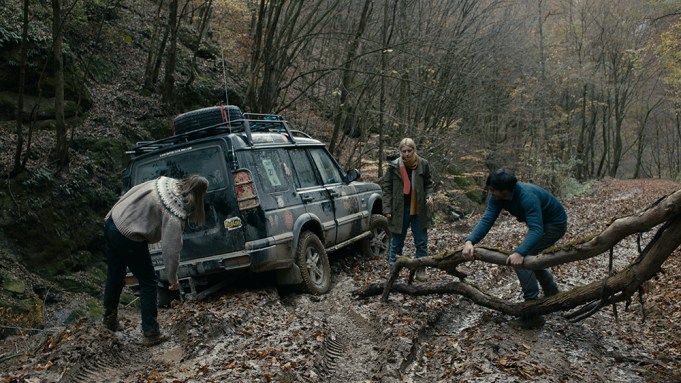 A trailer for Romanian director Radu Muntean’s eighth film and the fourth to be selected for Cannes has dropped ahead of its screening at this year’s Directors’ Fortnight.

“Întregalde,” the first acquisition of Romanian distribution company Voodoo Films’ sales arm, is a tense and mud-splattered affair that explores the true nature of altruism.

The tone is set early on in an argument between a volunteer couple that Maria gets a lift with: Radu (the director in a cameo role) and Cristina (Carmen Lopazan), who chastises her boyfriend for feeling pleased with himself that an eight-year-old girl that he handed a tablet to remembered him from an earlier mission. She reminds him that they are not there to play Santa Claus.

“I made a little girl happy when she was three or five, and now that makes me a monster?” he says.

“You made her happy one time, then let her down five years in a row by not showing up,” she replies.

Maria then joins co-workers Ilinca and Dan in Dan’s SUV, and the trailer picks up the action not long into their trip, which takes the three aid workers through dark forests, valleys and across mountainous terrain where they happen upon an older local, Kente (Luca Sabin), who requests a lift to the local saw mill.

Performing this additional good deed has dire consequences for all three as they go off road onto a dirt track and their SUV becomes submerged in mud.

As the old man wanders off in sub zero temperatures and darkness falls, the trio’s early banter becomes more serious as they are forced to make a series of decisions that involve putting their own lives in danger, ultimately to save the life of someone who no longer matters to himself.

No stranger to Cannes, Muntean’s third film “Boogie” was presented in Directors’ Fortnight 13 years ago, while titles “Tuesday, After Christmas” and “One Floor Below” were presented in Un Certain Regard in 2010 and 2015 respectively.

Muntean’s script for Întregalde” – the title refers to the Romanian region in which it is set – was co-written with regular collaborators Razvan Radulescu and Alexandru Baciu, who both worked with the director on “One Floor Below” and “Boogie.”

Popistasu, who received acclaim for her TV roles in Channel 4’s “Sex Traffic” and the BBC’s “Gunpowder, Treason & Plot,” has also appeared in several of the director’s previous films.

Executive producer and producer is Multimedia Est’s Dragos Vilcu – who has worked on all of Muntean’s fiction titles – while the co-producer is Oana Iancu of The East Company Productions.

*The film is showing on Sunday at 2.15 p.m. in the Théatre Croisette.